By Ken Hissner: At the Caribe Royale Orlando, Orlando, Florida on ShoBox Friday, Sampson Lewkowicz (Sampson Boxing) and TKA Boxing in associate with PBC presented in the Main Event Super Featherweight Dominican’s Luis “The Twist” Reynaldo Nunez stopped Puerto Rico’s Carlos “The Chosen One” Arrieta in the tenth and final round. 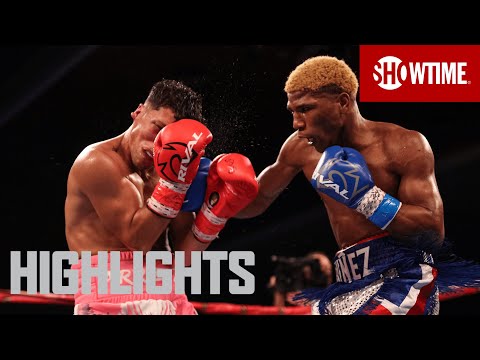 In the first round, for two minutes, Arrieta outworked Nunez to the body while Nunez came back in the final minute with some offense. In the second round, Nunez would take some body shots and counter well to the head of Arrieta, causing swelling under the right eye.

In the third round, Arrieta kept his hands high, only going to the body when he let his hands go. Nunez continued to have his way.

In the fourth and fifth rounds, things slowed down a bit as Nunez landed a bit more than Arrieta, who finally threw some headshots. In the sixth and seventh rounds, it was all Nunez landing overhand rights to the head while inside with little return from Arrieta.

In the eighth round, the pattern continued, with Nunez being the busier of the two. In the ninth round, both fighters were warned for holding as the action slowed down, but Nunez was still doing enough to control the fight.

In the tenth and final round, Nunez rocked Arrieta with a lead right on the chin. Nunez, looking to finish it, landed a flurry of punches having Arrieta defenseless and exhausted, forcing referee Frank Gentile to call a halt. Arrieta hadn’t won a round since the first.

In the first round, the shorter Eranosyan worked inside while Castillo countered. Halfway through the round, a left from Eranosyan on the chin dropped Castillo in a delayed knockdown for an 8-count from referee Young.

In the final ten seconds, a counter right from Eranosyan again dropped Castillo. In the second round, Eranosyan coming in low landed solid left hooks having Castillo against the ropes. In the middle of the ring, Castillo used his reach to get the best of the action. Eranosyan won the round though close.

In the third through the fifth rounds, Eranosyan landed 3 and 4 punches at a time on the chin keeping Castillo on the defense against the ropes with Castillo landing left uppercuts to the chin but not enough to win a round.

In the sixth round, Eranosyan continues to work Castillo to the ropes with a body attack. He ended the round with a right on the chin, getting the attention of Castillo.

In the seventh round, it was all Eranosyan at times showboating with hands to his side, daring Eranosyan to fight. He landed punches in bunches at times. In the eighth and final round, Eranosyan continued his all-out assault driving Castillo backward on the defense.

In the first two rounds, it was all De Los Santos with little return from Foster. In the third round, Foster finally started some offense though walking into left uppercuts by De Los Santos who is slowing down.

In the fourth round at the halfway point, a clash of heads caused a cut on the left eyebrow of De Los Santos. Referee Frank Gentile took away a point from Foster for using his head. Otherwise, it was another good round for Foster.


« Joseph Diaz Jr calls out Ryan Garcia for next fight

Lawrence Okolie faces Michal Cieslak on February 27th at the 02 »