By Jim Calfa: Rolando ‘Rolly’ Romero was less than enthusiastic from what he saw last weekend in Gervonta ‘Tank’ Davis win over Isaac Cruz and Devin Haney beating Joseph ‘Jojo’ Diaz. The undefeated Rolly (14-0, 12 KOs) saw weakness with Tank (26-0, 24 KOs) and Haney, and he thinks he would have knocked both of those lightweight champions out had he shared the center stage with them.

Tank started strong against replacement opponent ‘Pitbull’ Cruz (22-2-1, 15 KOs) but was worn down by the relentless pressure, body punching, and the youth of the 23-year-old Mexican warrior.

By the end of the fight, it was clear that Cruz deserved a draw out. Instead, the judges gave the A-side superstar a shockingly bad comprehensive 12 round unanimous decision win by the strange scores:

Jim Calfa had Pitbull Cruz fighting well enough to deserve a draw, if not a win. Although the fight looked even at the end, you would have to give Cruz the victory on effort alone because he was the better fighter in the last four rounds from the 9th through the 12th.

Tank ran around the ring in the 12th, and the judges gave it to him. That right there lets you know what Isaac Cruz was up against.

Pitbull wasn’t going to win a decision against a star like Tank Davis, but at least the judges could have done was make the scores closer to reflect the actual fight that took place inside the ring.

“Even though he didn’t win, a star was born tonight,” said Tank Davis about Pitbull Cruz.

“If I were in the ring, I’d knock them both the f*** out,” said Rolly Romero to Fight Hub TV on Gervonta Davis and Isaac Cruz. “I thought Tank won, but Cruz did land some big stuff, and I could have saw a draw. But like for Cruz to win, I didn’t see Cruz winning. He had a beat; he really beat like Tank.

“Wasn’t what we were supposed to do in the first place?” Rolando Romero said when asked how a fight between him and Tank Davis would play out. “Wasn’t that supposed to happen today for a reason?

“But yeah, we’re going to work towards that, right, Mr. Ellerbe? They love me [the fans]. I don’t know of anybody here that hates me. It was a good fight,” Rolly said on Gervonta’s performance.

“I think [Pitbull Cruz was] too slow for Tank, but he broke down Tank and hurt him. I saw when Tank injured his hand; that really did happen.

“He [Gervonta] injured his hand. I saw when it happened; he hit him [Cruz] in the elbow. He hit him with a straight left to the elbow, and he closed his eyes. But that s*** is part of boxing.

“The thing is, if he [Tank Davis] had been in the ring with me, he would have gotten knocked the f*** out,” said Rolly. “His defense is suspect. How are you going to compare Cruz to a puncher like me?

“Honestly, I think everything in that fight bothered Tank. I mean, Cruz has a hard a** head,” said Rolly in reacting to Tank’s win over Isaac.

Oh man, it would have been interesting if Rolly had been in there with Tank or Pitbull Cruz last Sunday night. With Rolly’s colossal punching power, size, and awkward fighting style, he would have given both guys massive trouble. 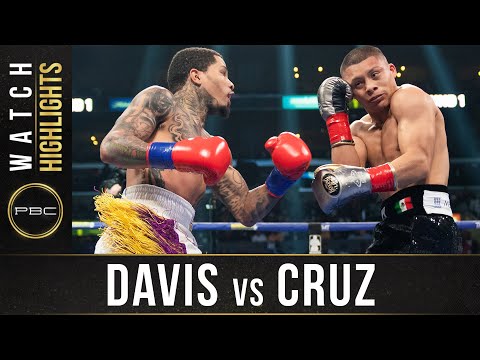 Tank wouldn’t have beaten him with just one hand, but with this set of judges, maybe he would have. Rolly might have needed a knockout for him to get the ‘W’ against Tank, but he might have pulled it off.

Gervonta looks like he aged badly from his last fight, and he’s starting to get a weathered look of someone that is getting old fast. Hopefully, Tank is taking care of himself in between fights and not having too many late nights.

“Man, Devin Haney is a bum, he can’t even fill out a f**** Arena,” said Rolly Romero. “He’s a f**** chump. Who cares about what the hell and the thing is, who has Devin fought? Devin is weak. He’s literally weak as hell, and a frail fighter. Anybody at the top level at 135 will knock him the f*** out.

“He’s talking about moving up to 140? Oh, there’s a lot of dogs at 140 that are punchers. I do really feel bad for Devin. He has a weak genetic makeup,” said Rolly.

Without any punching power to speak of, Haney, 23, was forced to box Jojo for extended periods to keep from getting beaten up. Luckily for Haney, Jojo Diaz was too sluggish and heavy to fight hard for any length of time.

The power isn’t there for Haney, and he was fortunate that he was facing an opponent that was incapable of throwing a lot of punches. Had Haney been inside the ring with talented lightweights like Tank, Ryan Garcia, Vasily Lomachenko, or Isaac Cruz, he would have lost the fight last Saturday.

All the weight that Jojo had packed on in going up from 130 to 135 has done a number on his cardiovascular system, making it physically impossible for him to throw more than three or four punches without needing a long rest break to recover from the exertion.

Haney needs to think hard before he decides to go up to 140 because he will have problems with the power from the fighters in that weight class.

If anything, Devin should be trying to find a way for him to lose weight to go down to super featherweight, where his lack of power won’t be as much of a disadvantage.