By Chris Williams: Mickey Bey says Errol Spence Jr. earned Floyd Mayweather Jr’s respect during their sparring sessions years back, and Floyd came away saying that Errol was “The Truth.”

According to Bey, back then, Mayweather would try and knock out his sparring partners by turning off the clock during their sessions to fight until he’d stopped them.

But in the case of Spence, Mayweather met his match and couldn’t do it. Back then, Spence was fresh from the 2012 Olympics and in his early 20s against Mayweather, who was in his 30s, not a huge puncher.

Mayweather might have picked the wrong guy in Spence to try and knockout during those sparring sessions, and the young Errol reportedly gave him pure hell.

If it was Mayweather’s goal to try and KO Spence, he picked the wrong guy because there would be no knocking out of the young Errol. Afterward, Mayweather told the media that he was impressed with Spence.

Although Errol never spoke on what happened during the sparring sessions, it’s widely believed he put serious hands-on Mayweather and got him annoyed that he was getting touched up by the young upstart.

Had this been a real fight, Mayweather might have had to get on his bike, as we saw in his grueling matches against Miguel Cotto, Jose Luis Castillo, and Marcos Maidana when the going got tough for him in the championship rounds.

“Yeah, I was there,” said Mickey Bey to Trill Boxing Talk when asked if he was present during the sparring session between Errol Spence Jr. and Floyd Mayweather Jr. 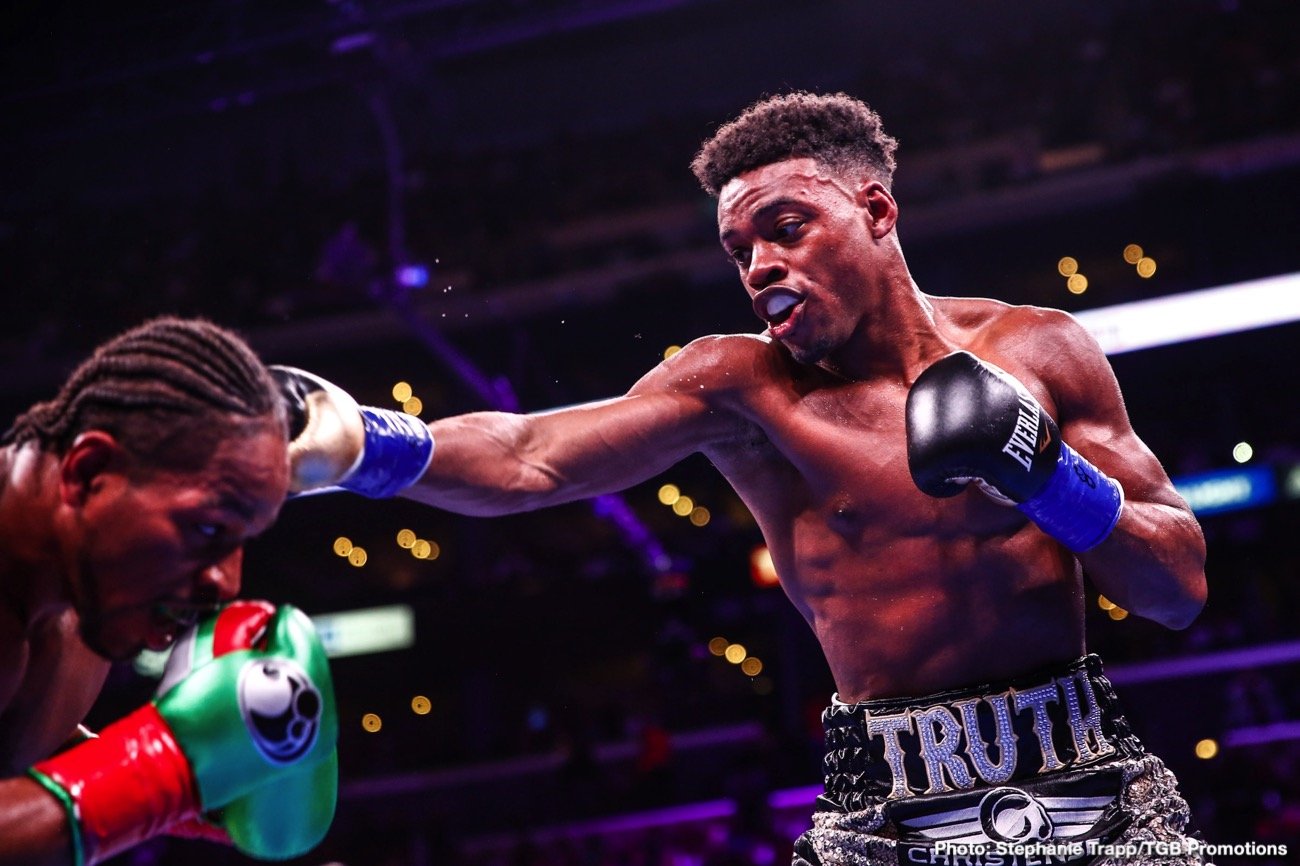 “That was when I first got hip to Errol and first started hearing about him,” Bey continued. “Errol was a few years young.

“I was impressed with him, and one of the reasons why I was impressed is because, at the beginning of camp, he had some good sessions where he might have got out on Floyd once or twice.

“With Floyd in top shape, it’s hard for anyone to deal with him. Errol gave him a good sparring session the whole camp.

“Usually, Floyd was beating the hell out of people,” Bey said. “By the time the camp was over, usually, Floyd would damn near ruin the fighter’s career.

“I seen him [Mayweather] ruin young fighter’s careers because Floyd sparred different than he fights. When he sparred, he tried to knock you out. So with Errol, he was talking s*** and got the whole gym.

“You know, Floyd has got the whole entourage talking s***. Errol told him, ‘I ain’t going nowhere. I’m going to be here.’ He’s like, ‘There ain’t going to be none of that to where I’m quitting,” Bey said.

It’s hard to believe that Mayweather would try and go after Spence to score a knockout. Talk about choosing the wrong guy. Mayweather walked into a hornet’s nest by trying to slug with Spence, and it sounds like he suffered a lot of stings for his efforts.

Floyd said Spence is “The Truth”

“Floyd even came with respect for him and was like, ‘Damn, this kid is the truth.’ Usually, people fold under pressure. Floyd would cut that clock off. He’d cut that s***,” Bey continued about the sparring between Spence and Mayweather.

“‘I ain’t no bail. We’re just going to spar until somebody drop,’ but Errol, his a** was still in there throwing leather, and he was young at this time. So, yeah, he gave Floyd the best work I’ve ever seen and made me proud.

“As far as sparring consistently, I seen people give Floyd work because I’ve been around Floyd since he was young. In the beginning, Floyd wasn’t really. It took for Floyd to hit, I think after he beat [Oscar] De La Hoya [in 2007], that people gave him his props.

“Before that, even out in Vegas, people wasn’t really looking at him like he was the best in the game like that.

“The only one I seen give him consistent work like the whole camp because usually, Floyd is going to beat the hell out of you the whole camp over with. Errol is the real deal. He gave him some work,” said Bey.

You got to give Mayweather his respect for sparring with Spence because he could have chosen lesser guys, but he wanted to be in there with the best.

It would have been interesting to see how Mayweather would have done against Spence in a real fight without headgear on.

Spence would have fought Mayweather if the fight were offered to him. Still, Floyd wisely played it safe in the last part of his career, choosing limited fighters like Maidana, a young 22-year-old Canelo Alvarez, over-the-hill Andre Berto, Robert Guerrero, and a past his prime Miguel Cotto.

“To be honest, in the beginning, I had Spence as the #1, but it’s just that I hate that this guy [Spence] had so many things happen to him that basically deterred his career, you know?

“I mean, every time we expect something from Spence, he’s hurt, you know? Over time with time off, if you don’t take no tune-up fights or anything like that, no, he’s not going to beat Crawford.

“And, he might not even beat Crawford even if he takes tune-up fights because we still haven’t seen the Errol Spence of old yet,” said Mayweather on his view that Spence hasn’t looked good in a long time.

“So, I mean, until we get a chance to get a glance of the old Errol Spence, right now, I still think it’s [Crawford-Spence] a pick ’em fight because Errol can bang.

“But as of right now, I mean, just because of the way that he [Crawford] stopped him [Shawn Porter on November 20th], I lean slightly, really slightly towards Crawford,” said Mayweather in picking Terence to beat Spence.

Suppose Spence gets in shape and destroys WBA welterweight champion Yordenis Ugas in the first quarter of 2022. In that case, he’s got a good chance of defeating Terence Crawford, provided he doesn’t suffer another injury of some sort during camp.


« Is Josh Taylor hurting his popularity by fighting Jack Catterall?