By Jim Calfa: Floyd Mayweather Jr. tore into Canelo Alvarez on Thursday during the aftermath of the Gervonta ‘Tank’ Davis vs. Issac ‘Pitbull’ Cruz.

Mayweather says the media gives Mexican superstar Canelo Alvarez a lot of praise, but they don’t focus on “steroid” stories about him. It’s primarily positive stuff from the media about the former four-division world champion Canelo.

Mayweather feels that the media should be giving attention to other fighters like Errol Spence, Boots Ennis, Gervonta Davis, and Terence Crawford instead of putting together pro-Canelo articles that make him look good.

Floyd wonders why the media don’t talk about Canelo’s steroids. Several years ago, Canelo tested positive for the banned PED clenbuterol, and he received a suspension and a lot of bad press from that.

Mayweather disagrees with the media saying that Canelo (57-1-2, 39 KOs) is a  different fighter since he beat him by a 12 round majority decision in 2013.

Some in the media believe that if the current mature 31-year-old Canelo were to have fought Mayweather in 2013, he would have beaten him.

“You don’t talk about that,” said Mayweather. “We don’t know all the fighters he beat, and he could have not been clean in a lot of fights.

“I don’t know,” said Mayweather when asked if he thinks Canelo was clean the night he fought him in 2013. “That’s your ‘Canelo, Canelo, Canelo.’ Come on, the kid was a cakewalk, easy,” said Floyd about his easy victory over Alvarez.

“The same fighter,” said Mayweather when asked if he sees a difference in Canelo since he fought him eight years ago. “People are like, ‘If Canelo were in his prime [in his fight with Floyd], it would have been a different fighter.’

“He [Canelo] was in his prime. Go back and look at me. I was at my best when I was in my 20s. When I fought Canelo, I was almost 40-years-old. A lot of time, they’re going to keep asking me about the Canelo fight,” said Mayweather.

You have to agree with Floyd about him not being in his prime when he fought Canelo.

Mayweather was 37 when he fought Canelo. He was nowhere near the fighter he’d been eleven years earlier when he was beating the likes of Diego Corrales, Jose Luis Castillo, Jesus Chavez, and Carlos Hernandez.

Mayweather had become a stationary, flat-footed fighter when he fought Canelo, and his game changed. In his early 20s, Floyd was a far better fighter than the 37-year-old version of Mayweather that beat Canelo.

“When they write about it, the headline, they’re going to make it extremely bad and seem like it’s a beef,” said Mayweather

“It’s not a beef. I like Canelo; I like his work. But we’re forgetting about Boots Ennis. He’s a hell of a fighter. We don’t talk about him. We forget about these guys.

“It’s f**** up that they don’t got Tank as pound-for-pound,” said Mayweather. “When you look, they got Canelo up there, and he’s one of the top guys up there, but he’s not the only guy. It’s not cool.

“Does racism go on in the sport of boxing? Absolutely!” said Mayweather in seemingly having an issue with the attention that Canelo is getting from media while not paying as much attention to Boots Ennis, Terence Crawford, and Errol Spence Jr.

Canelo receives a lot of press because his fans want to hear about him. For some reason, fighters like Ennis and Crawford don’t receive the same kind of fan interest, resulting in less media attention. 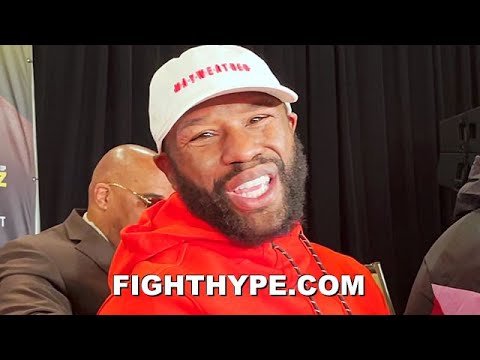 
« George Kambosos on “scouting mission” for Haney vs. Diaz fight on Saturday