On December 4th Lyndon Arthur takes on Anthony Yarde live on FITETV straight from Copper Box Arena in Queen Elizabeth Olympic Park, London. This will be the second time when Arthur faces off Yarde. Last year both fighters collided in a fight for the vacant World Boxing Organisation Inter-Continental Light Heavy Title when Lyndon Arthur won over Anthony Yarde with score decision. Now it’s time for Arthur to defend his title.

Two more titles will be on the line when Hamzah Sheeraz fights with Bradley Skeete for the WBO European Super Welterweight Title and in the match for the WBC International Silver Lightweight Title where Sam Noakes takes on Shaun Cooper.

WITH THE BIG rematch looming on Saturday night at the Copper Box Arena, Lyndon Arthur and Anthony Yarde met the media for the final time ahead of the crunch clash this afternoon at the BT Sport studios in Stratford.

Sat at the top table were Hall of Fame promoter Frank Warren, trainers Pat Barrett and Tunde Ajayi, along with both the fighters. Dev Sahni posed the questions and below are a selection of quotes from the media session.

NEWS:   Sunny Edwards vs Jason Mama in Dubai on Dec. 11, LIVE on FreeSports

It is a fantastic fight and it should be added that Lyndon is No.1 with the WBO, so the winner of this fight will get the winner of Joe Smith v Callum, Johnson in January. That is what is on the table, there is more at stake in this fight and, as we know, the first fight took place behind closed doors. It was a good fight but it didn’t spark as I expected it to. It was a close fight that I thought Lyndon won, but this one will be different for many reasons. There is more at stake and it is in front of a live audience. They know each other well enough now, they have shared a ring for 12 rounds, so who has learned the most from that first fight? Who will change tactics from the first fight? Who will adapt?

This fight is the chance for both of them to put right whatever they felt didn’t happen for them in the first one. I think we have got something special, this time around it is going to spark, and we will have a special fight between two extremely good, world quality fighters. I am so looking forward to it.

There was no crowd last time and, to be fair to Sunny Edwards, he made up for the crowd and was very, very vocal. That has gone now and where we are now is Saturday night, which will be the acid test for the both of them.

My focus is not on what has been said. Saturday night is my main focus, I am not here to discuss Pat Barrett and what he’s done or even what I have done in the sport. This is, as Frank put it at the last press conference, this is war. Talking can get you far and it has done for many people, but there comes a point where you have got to show what it is. Myself and Anthony haven’t done too much talking to get to this point and I feel it is incumbent on us to continue showing those who come from a certain environment how to conduct themselves when you get to a certain level in the sport.

Everything is a lesson and absolutely I have looked back on the last fight. There has been a lot of growth, development and evolving, not only for myself, but for the team because we are very analytical in our preparation and have always been. There has been growth for everyone.

I think they made a good choice in adding James Cook to the team, who is a very respectable fighter. I watched him coming up and he did it the hard way, he knows boxing and know how to come from the bottom to make it to the top. He is a creditable trainer and, really and truly, he should be sat up here at the table discussing Anthony. Yes I think he is very good.

It is kind of like Man City, who had so many managers before they could find the right one. I just don’t think there is enough time in the camp to say it is going to change him because it is not about physical attributes, it is about mental attributes. Me and Lyndon have grown together and the gelling has always been there. I’ve watched Lyndon grow up from being a kid to a man and the fighter he is today. The only changes I do with Lyndon is make him better.

I know the way Anthony Yarde is going to come because all they talk about is knocking people out. He is very good and I respect Anthony as a fighter. He is good at everything he does like Tunde says. When it is said we are looking at one thing with the jab, it is the master key that opens everything up. The funny thing is, they don’t respect Lyndon’s punching power and that will be their downfall because what they have got to realise is Lyndon is capable of doing more than one thing. He is intelligent in the ring, he can hold the pace when he wants to, he can drop it when he wants to, he can control it, he is good at distancing – he has got everything it takes at a world class level.

What you need to realise is trying to knock somebody out can also get you knocked out yourself. You have got to be smart in the boxing ring so my advice is to listen to James and become more of a thinker.

I think it is a mixture looking back on the first fight. I am not going to take anything away from Lyndon because he did his job, stayed on the back foot, popped out the jab and didn’t engage. One hundred per cent it was down to me more than what he did. I think people can see that. They were waiting for me to put on the gas and it was literally my decision making. You saw it in the last round, when I went for it, it was a completely different fight. My mindset at the time was, it is the 12th round now, you’ve done the rounds and can put the gas on now full throttle.

It was just decision making and timing. My mindset was not there for the fight. I do not make excuses and I was heated straight after the fight, but you can’t reverse anything and you’ve got to go in there and take opportunities.

He got the decision, a split decision and there are mixed opinions in boxing. One judge gave it to me by four or five rounds and two gave it to him by one round so it is just perspective and how you see the fight. At the time I thought I won it, they thought it was close and, going back and watching it from a different angle, I thought it was a closer fight as well. I am not about to bullsh*t anyone or lie about anything. I am a realist and you cannot progress or get better if you are not honest with yourself.

I watched it back and kept saying it was sh*t, but I was going through a lot and my mind was not on boxing at all. People will probably understand that, but I am a person that doesn’t make excuses. It is all about this Saturday.

It is not a case of getting this one out of the way because, like I have said in interviews, he has been a good dance partner for me. In this part of my career it is the best fight financially and also the best fight to get me out there again. It is not about seeing the back of him because it has been fun. The first fight was my coming out party and this will kind of cement it. It is part of my journey.

It is completely cool for him to say I am a boring fighter because the boring fighter won. I don’t need to listen to anyone, if they think I am boring, everyone is entitled to an opinion. It is sport and everyone in this room has an opinion on me and him. Whether they like me or him is down to them. I don’t care.

If I am boring, I will win boring. We will find out on Saturday whether a crowd benefits either of us. He thinks it does, but I don’t think it benefits him. I don’t care, it is a fight and the crowd can’t get in there. They can scream, they can shout and it will make a fun atmosphere. I had Sunny there before and he is like a crowd.

The pre-fight stuff is entertainment. The business part of this is Saturday and it is fun until we get in the ring across from each other, in my opinion. 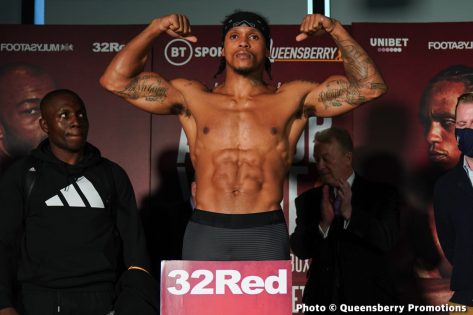 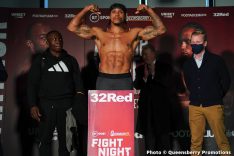 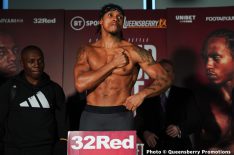 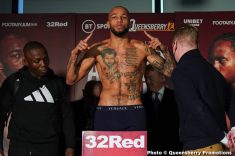 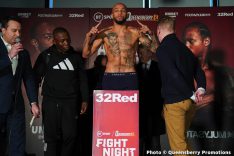 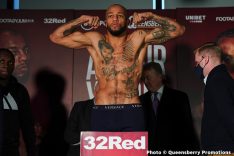 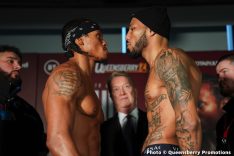 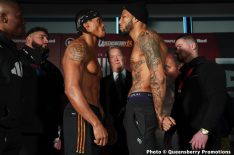 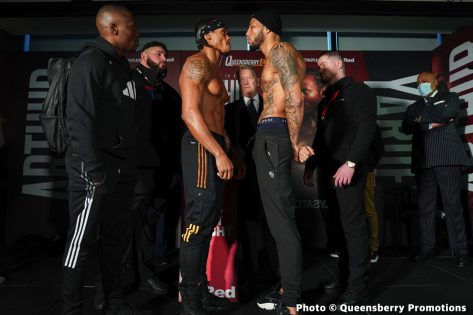 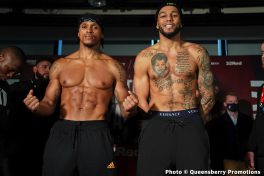 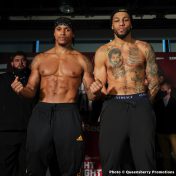 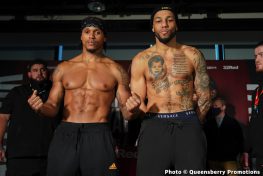 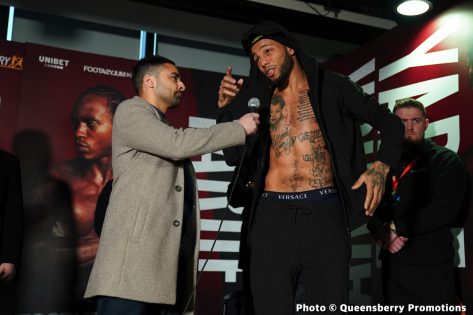 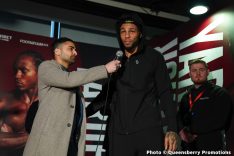 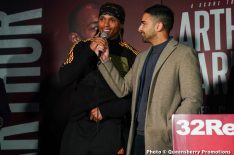 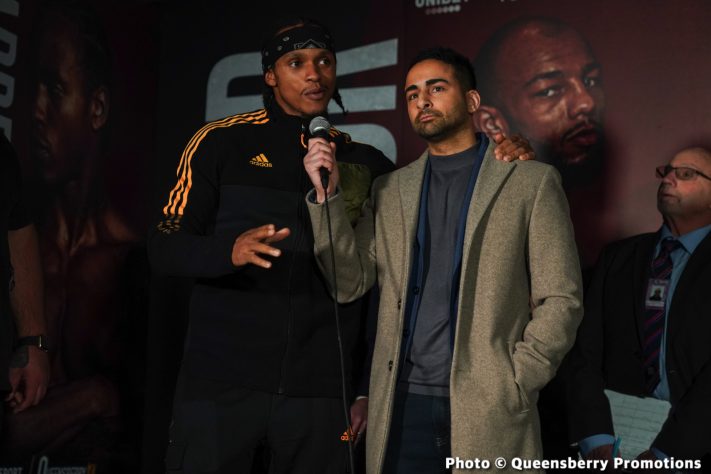