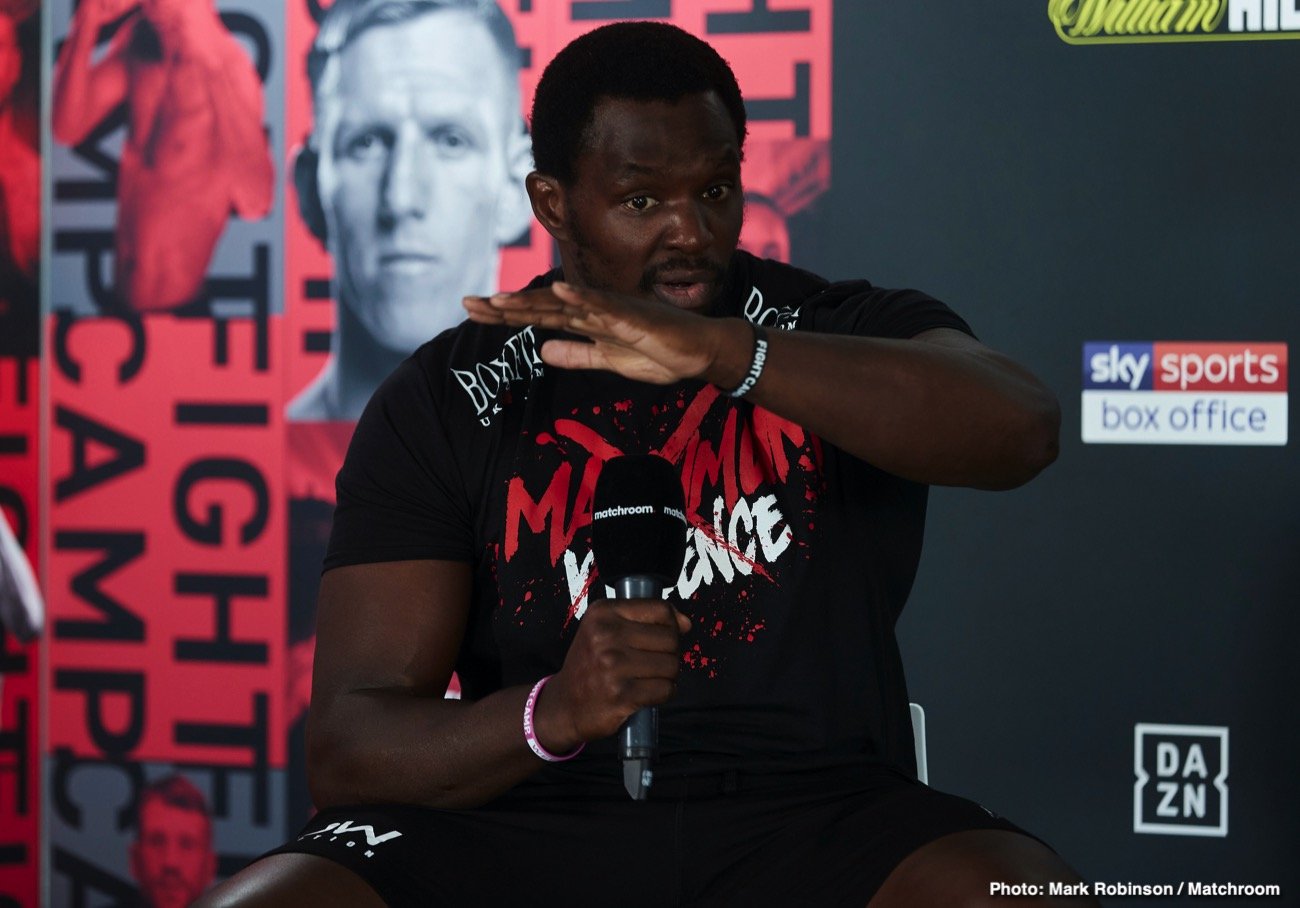 By Scott Gilfoid: Dillian Whyte was offered $5.5 million for a fight with Tyson Fury, but he wants double that at $10 million and that’s NOT going to happen, says promoter Bob Arum.

Even with that figure, Arum believes that Whyte and his team will want MORE than $10 million. So if Arum agreed to the $10 million, they would insist on asking for even more.

Unless WBC mandatory Whyte and his team change their minds quickly, Fury will be moving on and making a defense of his Ring Magazine heavyweight title against Andy Ruiz Jr. or Robert Helenius in March.

According to Top Rank promoter Arum, Fury’s WBC heavyweight title WON’T be on the line for his next fight.

Arum says that Whyte and his team are treating this fight like it’s their “last hurrah,” resulting in them asking for as much money as possible.

Dillian’s decision to price himself out means that he’ll eventually be facing a “non-entity” when he does return to the ring, says Arum. For Whyte to make huge money, he needs Fury, Anthony Joshua or Oleksandr Usyk and that’s not going to happen.

Fury to fight Ruiz or Helenius next

“You know, I’m all in with that. Tyson, I think, prefers to do his next fight in Manchester, but I really think we’re going to have to take a look at the whole situation.

“I’ll talk to Frank this week and Tyson, and we’ll figure out what we’re doing,” Arum said.

Robert Helenius or Andy Ruiz Jr. are arguably better choices for Fury to fight in his next title defense, as far as U.S boxing fans go.

Those guys are better known with the casual fans in the States than Whyte, who is an unknown over there.

Of course, if Fury’s next fight does take place in the UK, Whyte is the better option, but obviously, the $10 million that he reportedly wants isn’t going to fly with Top Rank.

“I believe from what I know about the case, he doesn’t have much of a case,” said Arum about Dillian Whyte’s arbitration case and him wanting a 55/45 split for a clash with Fury.

“What he should do is to come to the table and work out a deal for the fight to happen in the UK. Frank has a place in Cardiff that we can put it on. If he [Whyte] thinks he can win, and I assume he doesn’t, but if he wins, let him win and become the WBC champion.

“Stop crapping around with arbitration and looking to push for the biggest dollar. Tyson is the big attraction. No one has heard of in the United States of Dillian Whyte, really, and we’ve offered him a deal of 25% with a guarantee.

“He says he wants eight figures, over $10 million, which is out of the question. I don’t know what he’s talking about,” said Arum about Whyte asking for TOO much dough for a fight with Fury.

“No, with the WBC, we would be talking about 20 or 25% for the challenger [Whyte] and 80 or 75% for the champion [Fury]. But let him [Whyte] come to the table with a normal type of negotiation. Not say he wants eight-figures.

“Quit the crap and let’s sit down and have a zoom call and see if we can put it together because nobody wants litigation. We’d just as soon fight Dillian Whyte or Robert Helenius or Andy Ruiz and get it done,” said Arum.

Whyte’s promoter Eddie Hearn has been saying for weeks that they won’t agree to the 80/20 split that Top Rank is offering Dillian for the fight with Fury.

So even if Arum did sweeten the offer by bumping it up to 75/25, that wasn’t going to be enough.

If the $5.5 million that Arum is offering Whyte amounts to a 25% split for him, the $10 million that Dillian and his team are asking for must be closer to the 55/45 split that they were asking for.

“If Whyte thinks he can beat Fury, no one is asking him for options or a continuation and then he’s a free agent and then he’s a world champion and can do a unification with the winner of Usyk and Joshua,” said Arum.

“But I’m afraid they’re [Team Whyte] looking at this as their last hurrah, and they want to grab as much money as they can. Well, that makes it a tough negotiation.

“Yeah, they want $10 million dollars,” said Arum when asked if he heard back from Team Whyte after he offered them 25% for the Fury fight. “We want to guarantee him five million or five and a half million dollars against the percentage.

“Look at the purses you’ve made throughout your career. This would be by far his biggest and we’re prepared to pay it, yet they’re just grinding it out,” Arum continued.

$5.5 million sounds like a great offer, and it’s strange that Whyte isn’t agreeing to it. That’s roughly how much Andy Ruiz Jr. received for both of his fights with Anthony Joshua, and you don’t hear him complaining about the dough not being enough.

If Whyte can get that kind of money when he eventually fights for the WBC title, more power to him, but I seriously doubt it.

Fury to defend his Ring title, not his WBC

“So, Tyson will just have to fight for the Ring Magazine title and we’ll save the sanctioning fee money, and hopefully, he’ll be successful and then Usyk and Joshua will have fought, and the winner will be out there,” said Arum.

“He’ll [Fury] go on to fight them with or without the WBC title. So the loser will be without any question, Dillian Whyte. It’s up to Fury, he’s doing the fighting, but of course, that’s what he’ll do,” said Arum when asked if Fury will face the winner of the Joshua vs. Usyk rematch.

“Again, we’d love to do the WBC, we love Mauricio Sulaiman, a great guy, but business is business, and if it goes this length. Even if they’re [Team Whyte] successful with this arbitration, what are they going to end up with?

It doesn’t matter if Fury’s WBC title is on the line or not for his next fight because the casual boxing fans will have no clue, and the hardcore fans won’t care.

Fury is already seen as the #1 heavyweight in the division, so he doesn’t need any titles. His lineal or Ring Magazine straps are more than good enough for his next fight.

When Philly Boxing Was At Its Best But Couldn’t Produce but Three World Champs! »