By Jack Tiernan: Eddie Hearn says Devin Haney is ready and willing to go to Australia to take on undisputed lightweight champion George Kambosos Jr. next.

This appears to be a strategic move on Hearn’s part by speaking about Haney’s willingness to take the fight in Australia now, as other promoters will indeed be vying to set up a battle with Kambosos.

The Matchroom Boxing promoter Hearn is putting it out there early as possible that Haney, 23, is open to fighting Kambosos in his native Australia.

If Hearn can get Kambosos to commit to a fight immediately against Haney, he won’t test the waters and discover he can get a better deal against another fighter.

Hearn has to worry about Gervonta ‘Tank’ Davis and Ryan Garcia showing interest in fighting Kambosos because those guys would arguably bring more to the table in terms of fan interest than Haney, who isn’t all that popular.

Haney lacks charisma, and his fighting style is exceptionally dull. Some view him as a knockoff version of Floyd Mayweather Jr. once you take away the hand speed, chin, and charisma that he once had.

Haney will go to Australia for Kambosos fight

“I’ve never been to Australia, and I really want to go,” said Eddie Hearn to Matchroom Boxing on wanting to travel to Kambosos’ home country to match Haney against him. I think there’s absolutely no question that Devin Haney would go to Australia for that fight.

“We’ve seen major fights. Australia is a fantastic market at the moment. You go back to the Horn-Pacquiao fight was a massive occasion for the country and can do it again with Kambosos against Haney.

“This is a great run for Haney coming off the back of the Linares victory. But George Kambosos, you have to say, he went and beat the man [Teofimo], who beat the man [Vasily Lomachenko].

“Sometimes, when it means going to Australia to win the undisputed championship, then you do it. As I said, Australian boxing is on fire right now, and George Kambosos is leading the way. There are so many great fighters coming through.

“Like I said, Devin Haney would have no problems with going to Australia,” said Hearn. “We could do it in Vegas, or we could do it in Australi, but let’s just make the fight. First things first, [Haney] do not overlook Jojo Diaz.

It’s good that Haney is willing to go to Australia for a fight against Kambosos, but that doesn’t make him the ideal opponent. It’s fair to say that Haney is the lightweight division’s version of Demetrius Andrade.

Like Andrade, Haney has talent, but he’s not popular. He’s a belt-holder who was given his WBC title outside of the ring, and some call Haney an ’email champion’ because he was elevated to the WBC championship status out of the ring.

If Kambosos wants to make as much money as possible, Tank Davis or Ryan Garcia would likely be the way for him to go rather than Haney.

“It’s not going to be easy to what happened last week because it was a big shock to the division,” said Eddie Hearn to Matchroom Boxing on the big upset win for George Kambosos Jr. over Teofimo Lopez.

“This [Haney vs. Jojo Diaz Jr.] is a much closer fight on paper than Kambosos against Lopez was. I would say go up to 140 [for Teofimo] because it was pretty obvious that he was tight at the weight.

“He [Teofimo] said he wanted to defend his championships that he won [against Vasily Lomachenko]. He tried to do that. Rather than looking at why he didn’t defend them or the weight problems, let’s look at the quality and the heart shown by George Kambosos.

“It was tremendous to watch. He’s become a massive star for Australian boxing and world boxing as well. Teofimo will come again; he’s a great fighter,” said Hearn.

“People are now starting to question his resume. ‘Did he get lucky against Commey? Was Lomachenko injured?’ This is an excellent fighter. Let’s not take anything away from either guy and let’s give them credit.

“At 140, once those belts evaporate, I think Teofimo Lopez will become a two-weight world champion,” Hearn said.

There’s a perfect chance that Haney loses to Jojo Diaz on Saturday night in their headliner on DAZN at the MGM Grand Garden Arena in Las Vegas. 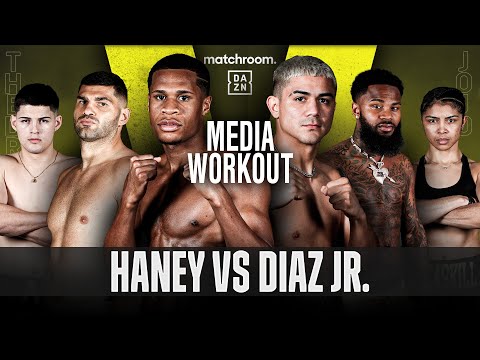