By Jack Tiernan: Demetrius Andrade may soon be vacating his WBO 160 lb title to move up to 168 to become mandatory for Canelo’s strap. If Andrade moves up to super middleweight, he can immediately become Canelo Alvarez’s mandatory with the WBO, putting him in a situation where he would need to defend against him or vacate.

According to Eddie Hearn, Andrade (31-0, 19 KOs) may vacate his middleweight title after receiving the bad news that the World Boxing Organization has ordered him to defend against the dangerous but little-known Janibek Alimkhanuly.

Hearn has been banging the drum tirelessly to encourage WBC middleweight champion Jermall Charlo, WBO mandatory Jaime Munguia, and Gennadiy Golovkin to face the 33-year-old Demetrius, but with NO luck.

Now with the WBO ordering Andrade to start negotiations with the 2016 Olympian Janibek (11-0, 7 KOs), it’s a fight that brings nothing but trouble with no real payoff.

Besides the risk involved for Andrade in dealing with the talented southpaw from Kazahstan, it’s a fight that Hearn will have a ton of problems trying to promote.

U.S and UK casual boxing fans aren’t familiar with Janibek, and they’re not going to be excited at the prospects of Demetrius defending against him rather than one of the more prominent names at 160.

Interestingly, Hearn still maintains that Canelo Alvarez isn’t ducking anyone, but he sure as heck wants nothing to do with Andrade. If it’s not dodging when Canelo chooses to fight Avni Yildirim rather than Demetrius, then I don’t know what is.

You can understand why Hearn is seething with the WBO ordering Demetrius to defend against Janibek next because it’s an impossible fight to promote. I mean, there’s NOTHING good that can come from Andrade defending against Alimkhanuly, and he might even lose.

The Kazakh has heavy hands and a style that will present nothing but problems for Andrade. But even if Demetrius does beat the 28-year-old Janibek, he gains nothing because no one knows who this guy is aside from the ultra hardcore boxing fans.

“How convenient,” said Hearn when told that the WBO has ordered Demetrius to start negotiations with their newly installed mandatory Janibek Alimkhanuly. “Of course, it will but how convenient [interfere with Hearn’s attempt to make Charlo vs. Andrade]. 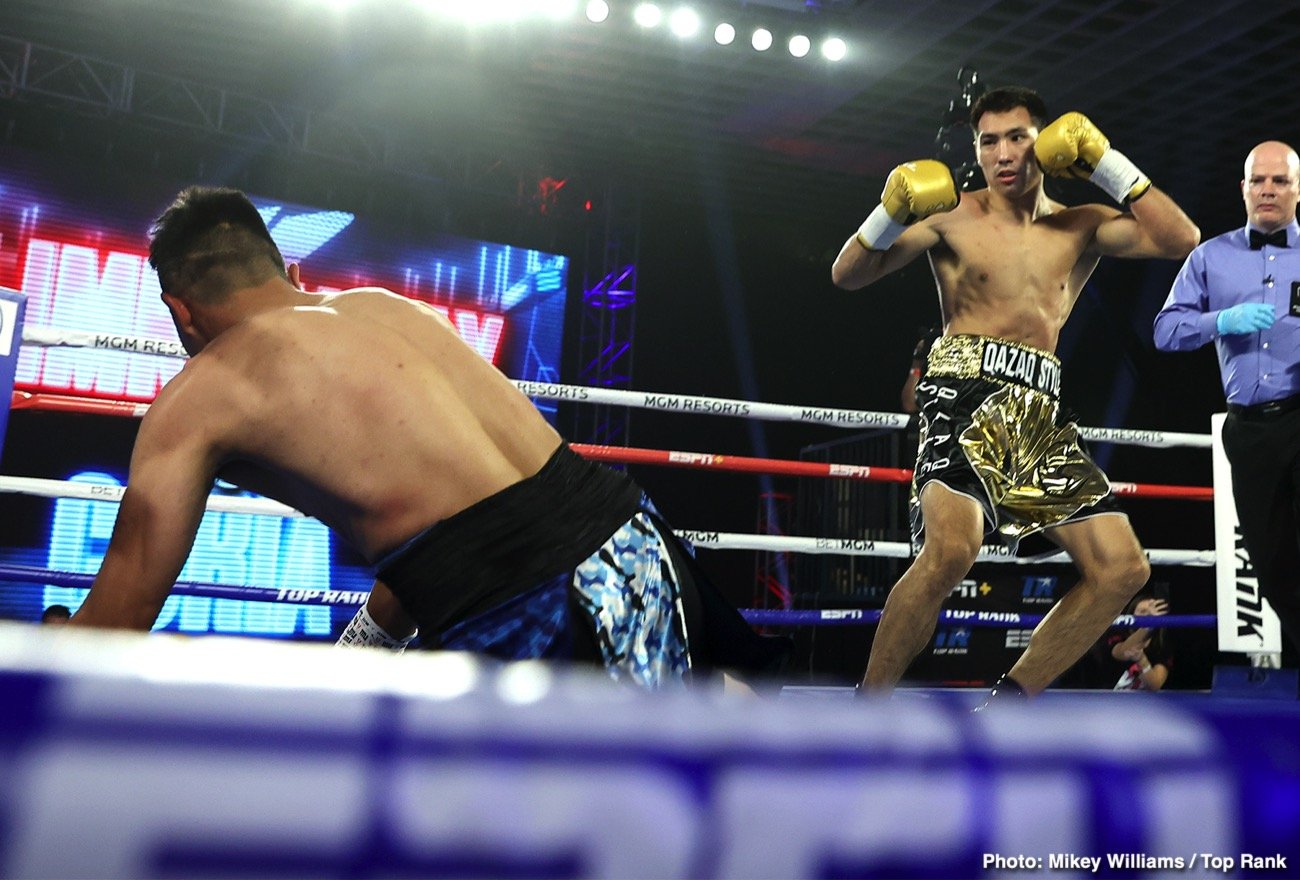 “One day later, we [Andrade] have got a mandatory [Janibek Alimkhanuly] with the WBO against some guy I’ve never even heard of. No disrespect to him.

“What we’re doing is asking the WBC to order that fight [between Jermall Charlo and Demetrius Andrade]. But Paco then had the right to say, ‘We approve that or we don’t approve that.’

“48 hours later, we get another mandatory called [by the WBO for Andrade to defend against #2 Janibek Alimkhanuly]. No disrespect to the guy; he’s a good fighter, I know he is. I’m not being facetious, but come on, who wants to see that?

“Now I’m in a situation where I’ve got to get creative. I don’t know what I’m going to do yet.

“Maybe Andrade moves up to 168 and bones mandatory for the WBO world champion? But we’ve got to do something because we can’t go fight that fight again.

“He could become mandatory to Canelo Alvarez, but Canelo wants to fight [Ilunga] Makabu, he wants to fight the champions. Canelo is not [going to fight Demetrius]. Canelo isn’t ducking no one, let’s be honest.

“He’ll fight anybody, but he does want to fight the champions. But if a fight out there makes sense against Demetrius? It’s a question for him. Right now, I like Canelo Alvarez trying to become undisputed at 175.

“Dmitry Bivol, Joe Smith, and Beterbiev. He can do that and become undisputed at 175 as well and maybe throw in a little cruiserweight fight as well,” said Hearn about Canelo.

“The guy [Canelo] is chasing history and legacy, and he’s going to do what him and Eddy Reynoso want to do,” said Hearn.

“Yeah, he did it at 154. He’d do it at 160,” said Golden Boy Promotions matchmaker Robert Diaz when asked if Demetrius should vacate his WBO 160-lb title to go up to 168 to become Canelo’s mandatory for his WBO belt.

“You’ve got to go looking for the big fights. I’m saying fights is Canelo, but it’s also the big payday. But again, they’ve got to be willing to say, ‘Benavidez, Charlo, Andrade’ and do a box-off. The winner would deserve that payday, not wants that payday once they beat each other,” said Roberto Diaz.

Eddie wishes he could FORCE GGG and Munguia to fight Andrade

If Hearn was the grand poobah, he could force Golovkin, Munguia, Charlo, or ANYONE to face Andrade, but that’s not the situation. Even with the guys Hearn promotes, he can’t drag them into the ring kicking & screaming to fight Demetrius because they’ll refuse.

Canelo has been transparent about his desire not to fight Andrade, and you can understand where he’s coming from.

As vulnerable as Canelo looked in his last two fights against Caleb Plant and Billy Joe Saunders, Demetrius would beat him. As far as Golovkin goes, he doesn’t mention Andrade’s name, which means he’s got zero interest in ever fighting him. Munguia is a limited fighter, and he’s not going to fight Demetrius either.

In Munguia’s case, he seems like he’s looking for a big cash out in the same way we saw recently with Caleb Plant. As a result, Munguia will never fight Andrade because he will wreck things for him.

“They’re [Gennady Golovkin and Jaime Munguia] not in-house fights; they’re in-network fights. I don’t represent those fighters, and if I did, I’d be telling them, ‘You’ve got to fight Demetrius Andrade,'” said Hearn.

“I can’t say to Golden Boy, ‘You have to [tell Munguia to fight Andrade].’ Listen, DAZN would love to see Munguia against Andrade or Golovkin against Andrade.

“Jaime Munguia, when he moved up to middleweight, was told by the WBO, ‘You’re mandatory to Demetrius Andrade.’ He said, ‘No, thank you. Just leave me alone for a minute.’ I don’t blame him. ‘Let me have a couple of fights at 160.’

“What has he had, four fights at 160? Now they’ve [WBO] gone back and said, ‘You’re mandatory.’ ‘I’ll fight an eliminator [WBC] against Derevyanchenko.’ What? You can fight for a world title on our platform [DAZN].

“So, it’s incredibly frustrating, but when they say, ‘Don’t worry about your other guys. Look at your in-house guys.’ I don’t have any in-house guys at 160 to fight Demetrius Andrade. Why do we have to look in-house?

“Demetrius don’t out-price himself. Listen, Charlo against Derevyanchenko was on pay-per-view. Charlo against Andrade is a massive fight compared to what they put on there, and I bet the money is the same. 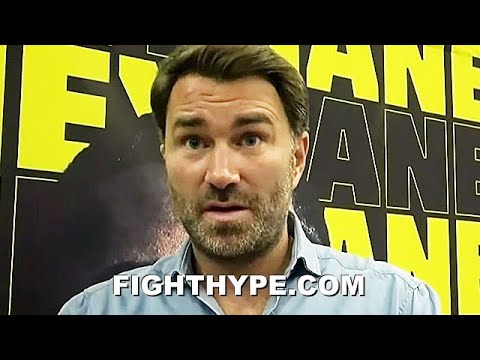