While the hard-hitting Benn (19-0, 12 KOs) is the favorite to defeat the 37-year-old former WBO light welterweight champion Algieri (25-3, 9 KOs), he may be overlooking him towards a bigger fight in early 2022 against Adrien Broner.

As Hearn says, Conor Benn vs. Broner will be a tremendous fight and bring in massive numbers. But first, Benn must get by Algieri, who isn’t looking past this fight because this is huge for him.

It’s easily Algieri’s biggest match-up since his loss to Errol ‘The Truth’ Spence Jr in 2016, so there’s no possibility that Chris will be overlooking Benn on Saturday.

Algieri is the most advanced fighter that Benn will have faced during his five-year professional career, and it’s unknown how he’ll react to being in the ring with a fighter with a high IQ like him.

Benn probably won’t be able to count on blasting Algieri out using brute strength in the way Spence did with his fifth round knockout. That version of Spence was a better fighter than Benn is now, so it would be a mistake for Conor to go right at Algieri thinking he can get the same results.

“I feel that Conor Benn is already a star in British boxing. We’ve seen it across the numbers, and we’re seeing it in the arenas,” said Eddie Hearn to iFL TV. “We’ll probably have close to seven thousand people here this Saturday in Liverpool.

“He’s a kid from Essex headlining in Liverpool, and that’s very, very unusual,” Hearn said of Conor Benn. “That’s when you start to see the big names. [Amir] Khan in his day could headline in any city and fill it up.

“There are very few people that can draw those kinds of numbers and in cities outside of their environment. I feel that Conor Benn is a star and potentially one of the biggest stars in world boxing,” said Hearn.

Benn isn’t a real star in the UK or elsewhere, but he is a money-maker, and that’s all that matters right now. If Hearn can continue matching Benn well, the money he brings in will continue unimpeded for many years. It helps when you have a famous dad named Nigel Benn.

When Hearn does eventually match Benn against an elite welterweight, he needs to make sure it’s someone like IBF/WBC 147-lb champion Errol Spence Jr. so that he can get life-changing money out of the match.

Right now, it’s unlikely that Benn could beat a talent like Spence, which is why Hearn should hold off on making that fight until Conor has had time to develop more.

Maybe Benn will never be good enough to beat good fighters like Spence and Terence Crawford, but he can still make a ton of money if Hearn lets those fights marinate.

Algieri is NOT a shot fighter

“You get to these kinds of fights [against Algieri], and your bum starts to go just a little bit because you know because this is a tough fight,” continued Hearn. “I know people say, ‘Oh, I know Algieri is 37.’

“He’s actually a great fighter. Algieri boxed Manny Pacquiao [in 2014] and had a very close fight with Amir Khan [in 2015]. He beat [Ruslan] Provodnikov for the world title. Yes, he’s towards the backstage of his career.

“He’s not shot, he’s not showing loads of signs of decline, he’s incredibly fit, he’s healthy, and he’s smart. This is a really dangerous fight for Conor Benn,” Hearn said of Algieri.

“Sometimes, when you look past these kinds of guys and start talking about [Adrien] Broner and [Shawn] Porter, Khan, and all these kinds of people, you end up losing rounds.  Before you know it, you’ve lost the fight.

“You get stopped late, or you lose on points, and I really see this as a really competitive fight against Algieri, who looks tremendous and will really realize the benefits of being up at 147 pounds over 140,” said Hearn in giving a warning of the risk that the 13-year veteran Algieri presents to Benn.

“When he makes 140, he don’t look well. Look at him now. He’s full of health, full of energy, and he believes they’re going to win on Saturday night, and that’s why they’re here,” Hearn said.

Algieri isn’t a shot fighter, but he’s not one of the relevant welterweights in the division due to his inactivity, lack of power and wins over quality opposition in the last seven years.

After Algieri’s one big career win over Ruslan Provodnikov in 2014, he’s lost to Manny Pacquiao, Errol Spence Jr., and Amir Khan. The fighters that Algieri has beaten have been B-level fringe contenders, who weren’t unique.

While you can’t call Algieri a shot fighter, it’s apparent that he’s not one of the great talents at 147 or 140 and never was even in his prime.

Benn could lose to Algieri

“He’s choosing the right fights commercially, and it’s giving him an opportunity to progress as a fighter,” Hearn said of Conor Benn, with him being given learning fights in his early five-year professional career.

“But let me ask you this. Sebastian Formella fought Shawn Porter on a headline on PBC. He went twelve rounds, and literally, a few months later, Conor Benn fought him and got criticism over the same fighter that Shawn Porter just boxed.

“Samuel Vargas comes in and boxes Vergil Ortiz, who went the distance with Amir Khan and put Khan on his backside. Conor takes him out in a round. Then they [Benn] go into the Adrian Granados fight. A very good tough fighter who got hit and decided to run all night.

“Now Chris Algieri [is next for Benn]. So Formella, Vargas, Granados, Algieri, this is the perfect development of a young fighter. When you’ve got someone potentially as special as Conor Benn, you don’t f*** it up by being too brave.

“So match-making is an art because it’s about development, and it’s about creating fights that people are interested in,” Hearn said in justifying his decision to match Conor Benn against the old professional Algieri.

There’s a genuine possibility that Benn could lose to Algieri by getting outboxed by the experienced former WBO 140-lb champion, particularly if he gasses out in the second half.

Benn put in a so-so performance in his last fight against Adrian Granados last September, being backed up at times by the smaller, weaker, and older fighter at times.

Although Benn won the fight by a comprehensive 10 round unanimous decision over the 32-year-old Granados, he didn’t look nearly as impressive against him as Shawn Porter or Robert Easter did.

Inactivity won’t be a problem for Conor

“One thing Conor Benn is he hasn’t been inactive, and he stayed in the gym the whole time, so there’s no reason,” said Hearn. “If he gets beat on Saturday, it’s not because, ‘Oh, it’s the pandemic, and he’s been inactive.’ It’s because he’s not good enough, and that can happen against a fighter like Chris Algieri.

“This is it for Algieri. He’s come here to win this fight; he must win. So you’re going to get a really good Chris Algieri. I’ll tell you something right now. Conor Benn looks sensational, and in that Granados fight, he got COVID at Fight Camp.

“He made weight nearly, put on that weight, got COVID, came back and didn’t have that same spring in his step in fight week. This week, he’s buzzing, and he feels he’s going to put in a tremendous performance on Saturday,” said Hearn.

Benn has already fought twice in 2021, beating the capable Adrian Granados by a ten round unanimous decision last September and journeyman Samuel Vargas by a first round knockout in April.

Benn will be in his third fight in 2021, so he should be razor-sharp and ready for Algieri. For Algieri, this will be his second contest this year.

Last August, he defeated the tough 36-year-old Mikkel LesPierre by a one-sided 10 round unanimous decision. Algieri looked as good as ever in that fight, showing no signs of decline from the guy who defeated Ruslan Provodnikov to capture the WBO light welterweight title seven years ago in 2014.

Adrien Broner could be next for Benn

“It’s a great fight,” said Hearn about potentially setting up a match between Benn and Adrien ‘The Problem’ Broner next. “Adrien reached out to us a couple of days ago, and we’re going to have a chat about various bits and pieces. It’s a great fight.

“Broner is a really dangerous fight because sometimes you don’t know what you’re going to get. I’ve been ringside with Adrien Broner when he boxed Gavin Reese at 135 pounds [in February 2013] in Atlantic City, and I thought this kid was one of the best fighters I’d ever seen in my life.

“If you get a focused Adrien Broner, it’s a really dangerous fight,’ said Hearn. “If you get one that’s not quite been concentrating in camp, it’s a great bit of matchmaking.

“So it’s somewhere between the two, and that’s a massive British fight, Adrien Broner against Conor Benn. But he has to get through Algieri.

“These are the kinds of fights that are the hardest because they’re the fight before the fight that everyone is talking about,” said Hearn.

Still young at 32, Broner hadn’t fought since last February when he defeated the always-tough Jovanie Santiago by a 12 round unanimous decision on Showtime.

Not surprisingly, Broner looked unmotivated for the fight, possibly because he fought a little-known opponent in the main event. But in Broner’s previous two matches before that, he’d performed well against Manny Pacquiao and Jessie Vargas.

A motivated Broner will be a handful for Benn, who won’t be able to count on scoring a fast knockout like he’s done many times during his short career. Broner will take Conor to the deeper waters and see what he’s made of. 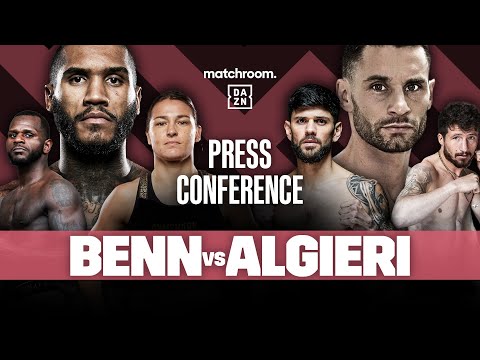