By Charles Brun: Bob Arum says he’s not interested in step asides deals for Anthony Joshua and Dillian Whyte to avoid their respective fights against Oleksandr Usyk and Tyson Fury.

Arum already knows that Fury will beat Whyte, and Usyk will defeat Joshua again, making it pointless for him to go through the headache of putting together step aside deals.

The end result will be Fury fighting Usyk for the undisputed championship in the second half of 2022, and Arum will get the fight he wanted anyway.

Arum says he just wants to see these two fights play out, and then the match-winner meets up next year.

According to Eddie Hearn, Joshua (24-2, 22 KOs) will be facing IBF/WBA/WBO heavyweight champion Usyk (19-0, 13 KOs) in a rematch next March in the UK, likely at Millennium Stadium in London.

Hearn said on Thursday that Whyte’s side would want the 55/45 allowable purse split for a fight with Fury. Team Fury’s promoters have already made it clear they prefer an 80-20 split.

“We’re dealing with professionals, and Todd duBoef is talking to the Dillian Whyte people, and hopefully we can put that fight together,” said Bob Arum to Boxing Social on the Tyson Fury vs. Dillian Whyte fight.

“What difference does it make now? Joshua can step aside. Whyte has got to step aside,” said Arum when asked about the possibility of Anthony Joshua stepping aside to allow Fury to face Oleksandr Usyk next.

“Forget these step asides. Let Joshua fight Usyk again. He has a contract to do that and let Dillian Whyte fight Tyson Fury. Whoever wins those two fights then fights for all the belts. I mean, it’s just a few months until it’s sorted out.

“Let’s stop doing what really is tortuous to get step asides and all of that stuff. It becomes so complicated, and it’s a convoluted way of doing,” said Arum.

One reason why Arum has no interest in messing around with putting together a step aside deal for Joshua is that it would involve another deal that would need to be made with Whyte to get him out of the way.

With the World Boxing Council ordering Fury to face Whyte next, it further complicates what would need to be done to clear the way for a Fury-Usyk fight.

The likely second reason why Arum isn’t interested in putting together step aside deals is that he already knows the results of the two fights.

Arum is certain that Fury will defeat Whyte, while Usyk will do the job on Joshua a second time, making him regret that he decided to take the rematch.

Fury vs. Whyte split needs to be resolved

“That’s great news for Dillian Whyte. There’s still, of course, the situation of the split to resolve,” said Eddie Hearn to iFL TV on the WBC ordering the Fury vs. Whyte fight this week.

“I said to [WBC president] Mauricio [Sulaiman] on Saturday in Vegas that it’s difficult to negotiate a fight when you don’t actually know what the purse split bid is.

“So that needs to be determined before we can even consider deals, really, I think. Obviously, there’s a purse bid scenario, but we’re more than happy to do a deal if it’s the right terms for Dillian Whyte.

“We will be aggressive, and we would like to promote that fight. So we will be talking with our partners to find out what kind of bid we will make for that fight. Dillian will weigh up his options and decide what route to go down.

If Hearn and Whyte get too greedy and insist on the unrealistic 55-45 split, Fury and his promoters at Top Rank will likely walk.

In doing so, the WBC strap will be thrown overboard, treated like an unneeded ballast for a ship that is lightening its load by dumping unless weight.

While Hearn might momentarily celebrate Fury vacating his WBC title, he’ll soon realize that it’s an empty victory for Whyte because he won’t get the hefty cash fight with the Gyspy King.

Instead, Whyte will likely be ordered to fight the highest-ranked contender in the WBC’s top 10 rankings, which in this case would be #1 Deontay Wilder or #2 Andy Ruiz Jr. Either of those former world champions would be an absolute nightmare for Whyte.

If the WBC elevates Whyte to the new champion, as they did with Devin Haney through the email process, he would be viewed as a paper champion and likely ignored by Fury, Anthony Joshua, and Usyk.

“Obviously, what he wanted to do was rematch Oleksandr Usyk, and with the news of Dillian Whyte now, that’s almost certain the fight that will take place probably a month or so after Whyte against Fury.

Joshua likely never considered stepping aside because he wants a rematch with Usyk as fast as possible to try and redeem himself, as he did in 2019 after losing to Andy Ruiz Jr. earlier that year.

AJ may discover with Usyk that he’s an entirely different ball of wax. Joshua won’t be able to count on Usyk eating his way to obesity, skipping training sessions, and partying like it’s his last day on earth.

Usyk won’t be a slob. He will work hard, and he won’t be shocked if Joshua chooses to use his size & strength to overpower him. It’s almost a given that Joshua will try and stomp Usyk.

If Joshua tried something different than that, it would be a surprise to Usyk, so he’s going to be ready for his game plan next March.

It’s not surprising that Hearn wants to make sure that Joshua has the home country advantage for the rematch Usyk because he will need all the help he can get from his loyal boxing fans.

If Joshua loses the rematch, the gravy train could come to a stretching halt. Losing a couple of times is forgivable, but when a fighter starts piling up defeats like they’re going out of style, it’s time for Joshua’s fans to abandon ship.

Usyk wanted the rematch with Joshua to take place in his native Ukraine. He feels that he deserves to have the match occur in his home country because he won their previous fight in AJ’s home country on September 25th at the Hotspurs Stadium in London, England.

Hearn forgot he started the $40 million AJ step aside rumor

“No, I see some of this stuff sometimes, and I’m just like, ‘It would be nice,’ but that’s not the number that was discussed,” said Hearn when asked if Joshua was asking for $40 million for the step aside.

“I have absolutely no idea,” Hearn said when asked where the talk of Joshua wanting $40 million came from. “The mad thing is everyone runs with it, and everyone believes it. Sometimes it’s better just to ask me.

“I can’t give you the exact truth in certain situations, but at least I’ll tell you what’s bollocks and what’s not,” said Hearn in forgetting that it was HE who claimed recently that Joshua would need $40 million as a possible step aside.

Hearn seems to have forgotten that it was HE who started the talk of Joshua needing a $40 million step aside when he told an interviewer from Boxing King Media this:

“Seven figures? One million,” said Hearn when asked if Joshua was offered seven figures for the step aside. “If you want to get him [Joshua] not to fight Oleksandr Usyk, you better times that by about forty,” meaning Joshua would need $40 million in theory for him to step aside. 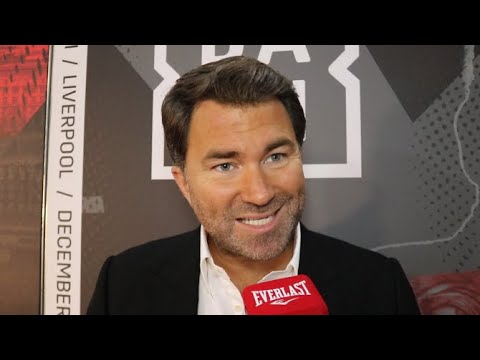