By Mark Eisner: IBF/WBC light heavyweight Artur Beterbiev (17-0, 17 KOs) overcame a slow start a terrible cut to come back to stop WBC mandatory Marcus Browne (24-2, 16 KOs) in the ninth round on Friday night in a drama-filled bout from start to finish at the Bell Centre in Montreal, Canada.

Beterbiev, 36, was cut badly from a clash of heads in the fourth round, and he was forced to up the pressure to rally to get the stoppage before the referee pulled the plug before of all the blood.

Throwing vicious body shots, Beterbiev knocked Browne down in the seventh and the ninth rounds to get the knockout. The time of the stoppage was at :46 of the ninth. 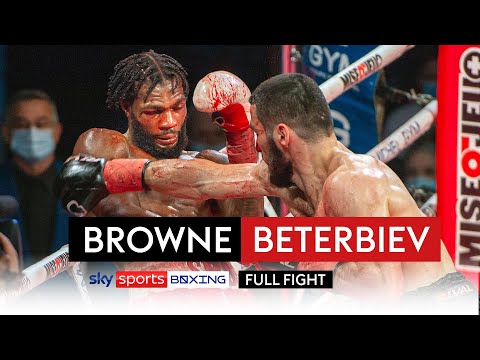 Speaking of Canelo (57-1-2, 39 KOs), he and his trainer Eddy Reynoso are expected to SCOUT out Beterbiev tonight, watching closely for signs of weakness that will make him an ideal opponent for next year.

Those two will be watching the two-time Russian Olympian Beterbiev like a pair of hungry hawks, focusing on any flaw to put it in their memory banks for later use.

That’ll be up to Canelo to decide if he wants to take the risk against Beterbiev because it’ll be a lot more complex than the Mexican star’s previous trip up to 175 against the shopworn, oddly passive Sergey Kovalev in 2019.

2020 was a bad year for the powerful IBF/WBC light heavyweight champion Beterbiev (16-0, 16 KOs), as he dealt with injuries and a Covid-19 illness that kept him out of the ring.

When Beterbiev did return to action last March against Adam Deines, he looked rusty and nowhere near the level he’d been at in his previous fight against WBC 175-lb champion Oleksandr Gvozdyk a year and a half earlier in October 2019.

Beterbiev eventually got Deines out of there in the tenth round, but it wasn’t the same performance from him that we’d become accustomed to seeing.

“I would look forward to May or September, the two dates that Canelo likes to fight, that he would fight one of those light-heavyweights,” said Top Rank promoter Bob Arum to Sky Sports about the possibility of Beterbiev facing Alvarez in May or September 2022.

Tonight, Beterbiev will need to fight much better for him to defeat the 31-year-old Browne because he’s a far better fighter than Deines, with power, skills, and the ability to end the fight with one punch.

Suppose the last two years have taken something out of Beterbiev. In that case, he’ll have problems with Browne because he’s still firing on all cylinders and will be looking to snatch his IBF & WBC titles to punch his ticket for a massive payday fight potentially against Canelo Alvarez next year.

If Beterbiev is as rusty as he was against Deines, Browne is going to push him and may wind up winning the decision. That won’t be easy obviously, given that the fight is taking place in Beterbiev’s adopted hometown of Montreal, but anything is possible.

Browne isn’t the type of fighter that Beterbiev can afford to have an off night against because he’ll make him look bad with his boxing skills.

What’s interesting about the undercard is the number of rounds the fights are scheduled for tonight.

Three of the undercard fights are 10 round affairs, and 3 are eight rounds. You don’t see that kind of thing in many cards nowadays.

Artur Beterbiev will have a lot riding on his title defense of his IBF & WBC light heavyweight belts against American Marcus Browne at the Bell Centre in Montreal, Canada.

Beterbiev – Browne card will be streamed on ESPN+ beginning at 8:00 p.m. ET

Besides his perfect 16-0 record that will be on the line for powerful Russian Beterbiev, he could win the Canelo Alvarez lottery in 2022 if luck is on his side.

Boxing News 24 will be giving LIVE update results below on tonights’ action for the Beterbiev s. Browne card: