By Matt Lieberman: Undefeated junior middleweight contender Tim Tszyu weighed in successfully at 153 1/4 lbs during Tuesday’s weigh-in for his 12 round headliner fight against Takeshi Inoue on Wednesday night at the Qudos Bank Arena in Sydney, Australia.

The visiting fighter, #7 WBO Inoue (17-1-1, 10 KOs), weighed in at 153 1/2 lbs and looked in great shape and ready for battle on Wednesday night. Inoue says he believes he’ll score a knockout of the 27-year-old ‘Soul Taker’ Tszyu in this fight.

Despite not possessing massive power, Inoue fancies himself as a slugger, and he’s going to be loading up on all his shots trying to take Tszyu out.

That could prove to be Inoue’s undoing, though, because he’s going to be putting himself in harm’s way by looking to knock Tszyu out.

We’ll see if Inoue’s strategy of fighting Tszyu’s fight will work for him, but on the surface, it doesn’t sound like a good idea.

“I got from two days before, I was cutting mostly the water weight, and I was able to get down [to 154] with no problem,” said Takeshi Inoue after successfully weighing in on Tuesday for his fight with Tszyu.

“I’m not just recovering, getting my energy back in and eating some good food, relaxing, and I feel confident I can make this a really good fight. Yes, I do still believe I’ll win by knockout,” said Inoue.

In the leaked sparring video of Inoue and Michael Zerafa this week, the Japanese fighter looked great. However, the sparring footage was from several years ago, making it difficult to know if Inoue has improved since then.

Inoue is a good fighter, but he lacks one-punch power, and the only way he’s going to beat Tszyu is by winning a decision.

That’s not going to be easy because Tszyu will be landing a massive amount of potentially fight-stopping power shots on Wednesday night.

Inoue will need an excellent chin for him to take the sledgehammer blows from Tszyu for a complete 12 rounds.

“It’s alright. At least I made, and I’m coming for his head now,” said Tim Tszyu moments after successfully weighing in at 153 1/4 pounds on Tuesday at the weigh-in. “Look, you’ve got to enjoy yourself, and it’s all part of fight week.

“This is fun.”I’m coming for him,” said Tim Tszyu on his fight with Inoue.

“I hope he [Inoue] has had a great holiday here. The holiday ends tomorrow. Let him do what he wants,” said Tszyu when told that Inoue is planning to try and knock him out.

Tszyu is coming into Wednesday’s fight with Inoue, having stopped in his last five opponents since 2019, and he’s going to be hard to beat.

Inoue doesn’t have a lot of power or speed going for him, which means he’s going to need to find another way to win.

The 31-year-old Inoue is fighting Tszyu on his home turf in Australia, which will make it challenging for him to win a decision.

“He’s just got better with every fight,” said Jeff Feneck to FOX Sports about Tim Tszyu. “There were times where I thought, ‘Will he be as good as his dad?’

“Sometimes I look at him and think he’ll actually be better, which is a huge statement because I think Kostya was one of the greatest fighters I’ve ever seen.

“But some of the things I see Tim do, the way he sets things up. Forget about the power, but with the way, he can bring and make out what you’re going to do, or he can make you do things.

“He sets up traps and fires off so well. I’ve never seen anyone like him. Recently, I said I think he [Tszyu] can fight Canelo, and I say that without any doubt. 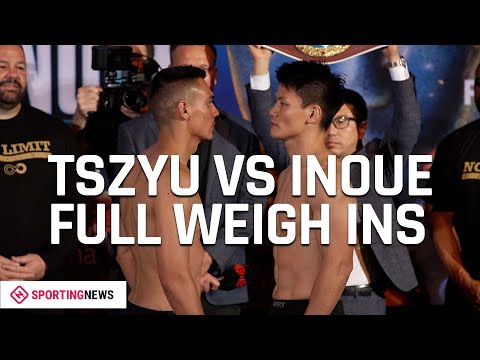 “People say, ‘Nah, Jeff is on drugs. Why is he saying that for?’ But if this guy [Tszyu] went up in weight, he’d be the guy that handled him.

“Yeah, it would be a great, great fight,” said Fenech on his vision of Tszyu going up to 168 to beat Canelo.

For Tszyu to have a chance to get a lucrative fight against Canelo, he’s going to need to do something special at 154 first by capturing one or more world titles.

It would be an excellent start for Tszyu to make a fight with Canelo a reality by taking care of business against Inoue on Wednesday in spectacular fashion.

An early knockout win for Tszyu would open some eyes, especially given the fact that former WBO junior middleweight champion Jaime Munguia couldn’t dent Inoue’s chin two years ago when he beat him by a 12 round unanimous decision in January 2019.

For Tszyu to have a realistic chance of getting a fight with Canelo, he’ll likely need to dethrone WBO 154-lb champion Brian Castano or IBF/WBA/WBC champion Jermell Charlo and then move up to 160 and pick off one of the champions in that weight division.


« Hughie Fury vs. Chris Arreola in the works