They felt that IBF super middleweight champion Plant (21-1, 12 Kos) fought scared against WBA/WBC/WBO champ Canelo (57-1-2, 39 KOs), and he didn’t attack him the way he needed to have a chance of winning.

Also, Rolly and Teofimo were disappointed by Plant talking with Canelo in the ninth round, complimenting him on his talent, and asking him for praise in return.

To them, it looked like Plant was trying to get reassurance in the middle of the fight, which was a bad sign. Granted, Plant was losing, but there was still more than enough time to pull out a victory if he’d gone all out against Canelo.

As a result of Plant showing fear and fighting in a passive way by mostly jabbing running, Canelo eventually caught up to him in the eleventh round and knocked him out after dropping him twice.

Teofimo believes that the 28-year-old Plant blew his chance and will likely never get another opportunity like that for a big payday.

Canelo obviously will probably never fight Plant again, and there’s no one else at 168 popular enough to give Caleb a similar $10 million+ payday that he received last Saturday.

“I’m sorry to say, but Caleb Plant, you’re not going to win fights against a puncher [Canelo] throwing boom-boom-boom [jabs], barely touching somebody, I’m sorry to say,” said Rolly Romero to Fighthype on Plant’s loss to Canelo Alvarez. “You got to hurt people; it’s as simple as that.”

“To me, to be a champion, you’ve got to do what no one is willing to do, and I don’t think Caleb Plant displayed enough of that when he fought Canelo on Saturday. He fought with too much respect,” said Teofimo Lopez. “It was way too much.”

“There was a point in time where Canelo was on the ropes and was just waiting there to see what Caleb would do next, what he is up against, and Caleb just conserved and just started throwing jabs and nothing to commit with. You have to commit, especially with a guy like Canelo.

“Canelo is not going to respect you when he’s in there,” said Teofimo. “He’s not going to give you your time to give you a chance to come back, and that’s why is undisputed. The right champion won. You give a man many times an option, and then he had to finish him [Plant] in the end in the 11th round. He went for the kill.

“I’m looking forward to seeing that next year for him. Keep his head up. You’re good, but you’re not great,” said Teofimo in wanting to see how Plant comes back from his loss to Canelo.

It’s academic that Plant looked completely terrified during the fight, especially in the later rounds when Canelo was walking him down and looking for a knockout.

You could see the fear in Plant’s eyes, and he was running from the seventh round on.

Plant was looking for acceptance from Canelo

“When they were talking?” said Rolly when asked what his thoughts were on the back and forth discussion Canelo and Plant had during the ninth round. “I’ll be honest with you. It looked like Plant was looking for some kind of acceptance from Canelo, and Canelo just ignored him like, ‘Bro, this is a walk in the park,'” said Rolly.

“F*** that,” said Teofimo in reacting to Plant having running dialogue during the ninth round with Canelo.

“Honestly, if you’re over there talking about respecting each other in the middle of a fight, do that s*** after the fight,” Rolando Romero said about Plant complimenting Canelo and looking for reassurance during the ninth round.

“At that point, it looked like he [Plant] was trying to have Canelo have mercy. That’s what it sounded like,” said Rolly.

“Of course, he’s going to say he respects his skills because he earned the right to fight Canelo,” said Teofimo. “I mean, everybody earns their spot, and some are given, but I know Caleb Plant earned his rightful spot to fight Canelo, but it’s like at that moment, you got to zone the f*** out.

“This is for your legacy, your family and for your kids, and so much more. Yeah, it’s good if you get a nice bag [paycheck] in that fight, but that’s the biggest bag you’re going to get from this point forward until a miracle happens.

“Usually, miracles only happen once in a blue moon. So now you’ve lost that opportunity, and now you’ve got to deal with circumstances,” said Teofimo about Plant.

It looked like Plant was trying to get Canelo to go easy on him in the ninth round by electing to start a conversation.

Talking is one thing, but what Plant was saying indicated that he wanted reassurance because his confidence was shot at that point.

“I think that s*** is great for boxing,” said Rolly on Teofimo standing on stage with his four titles alongside undisputed champion Canelo last Saturday night at the post-fight press conference after his win over Caleb Plant.

In hindsight, Teofimo shouldn’t have posed on stage with Canelo with his belts last Saturday after the Mexican star had collected his fourth belt to become the first-ever undisputed champion at 168.

It made Teofimo look like he was trying to pass himself off as an undisputed champion at 135 when in reality, he holds three belts and still needs the WBC title to become the undisputed honor.

Teofimo’s WBC Franchise title is more of an honorary trinket given out by the World Boxing Council to popular fighters, but it’s not a transferable belt unless the fighter asks to have it on the line. 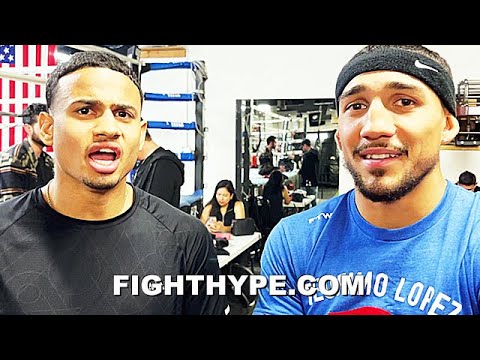 Terence Crawford: ‘Canelo getting the fights he wants, but I haven’t’ »