By Allan Fox: Teofimo Lopez and George Kambosos Sr. got into it a little bit after Friday’s weigh-in. Teofimo (16-0, 12 KOs) ran over and got in the face of Kambosos’ dad, who was in the audience and shouting at him.

IBF/WBA/WBC Franchise/WBO lightweight champion Teofimo might have wanted to get a little payback for Kambosos Sr. after getting into an altercation with his dad, Lopez Sr. earlier this week.

Lopez Sr. was so upset after the altercation that he told his son to make sure he knocked out Kambosos early within three rounds on Saturday.

“Australia is going to hate us,” said Teofimo Sr., moments after the verbal exchange between Teo and Kambosos Sr.

It’s unknown whether the ticket sales have been good, but you can’t say that Teofimo Sr. and Kambosos Sr. haven’t don’t their part to attract interest in their son’s fight.

“We’re walking him down, and I’m letting him know the game plan before it even happens,” said Teofimo Lopez Sr. to Kristal Hart on the game plan Teo will be using against Kambosos Jr. on Saturday.

“We’re walking you down and beating the s*** out of you. That’s all we’re going to do,” said Teofimo Sr. “I’m letting him know, so he better be ready.

“This fight is the most amazing fight of the world because people like knockouts, but we fight real fighters to knock them out, not like Tank. He fights chumps to make it look good.

“All I can say is we’re ready. Kambosos has nothing for us. We’re going to knock him out in the first round, and it won’t go past three, and I’m saying it right here,” said Teofimo Sr. in predicting a knockout win for Teofimo over Kambosos.

“I’m going to eat Kambosos on Saturday night,” said Teofimo Lopez to iFL TV. “I believe that for sure because, bro, you could make this fight happen,” said Teofimo when asked if Josh Taylor was afraid of him.

“Right now, I look forward to George Kambosos Jr, and then we can get back on that again.

“I’m starving to be a legend. I’m starving to be one of the GOATs. Yes, if you’re getting annoyed with me, I’m sorry to say that I’m not sorry. I’m going to keep calling you because everybody wants to see those fights happen.

“We make fights happen. I don’t know about that side [Josh Taylor], but we’re going to make those fights happen one way or another,” said Teofimo.

It’s still a bit early for Teofimo to be talking up a fight between him and undisputed 140-lb champion Josh Taylor.

Teofimo needs to take care of business on Saturday night first against Kambosos before being taken seriously by Taylor. 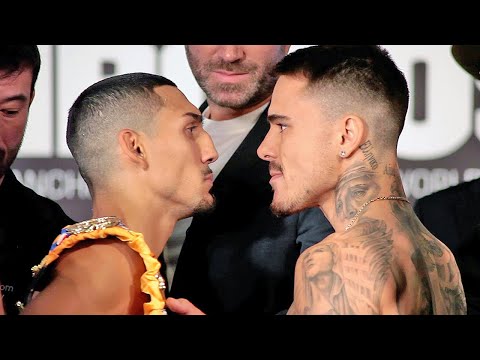