By Matt Lieberman: Teofimo Lopez Sr. got into it with one of the Team George Kambosos Jr. members on Tuesday at the fighter workouts head of this Saturday’s fight on DAZN at Madison Square Garden in New York.

Teofimo Sr. ran up on one of Kambosos’ team after some were exchanged, and we were then shoved. At this point, Teofimo Sr. had to be pulled away by the staff because he was frantic-looking and shouting obscenities left and right.

Surprisingly, Teofimo Sr’s son was as cool as a cucumber, melting into the background as if this was an everyday thing for him. Teo looked totally unconcerned that his dad almost came to blows with Team Kambosos.

Perhaps one reason why Teofimo wasn’t stressed out like his dad is that he’s a huge favorite to win the fight.

Kambosos, 28, can’t punch, and he’s not shown anywhere near the same talent that Teofimo possesses during his eight-year professional career.

“I’ve never seen him so ready for this fight, and he hasn’t fought in about a year,” said Teofimo Lopez Sr. to iFL TV on Teo’s fight against Kambosos Jr. on Saturday. 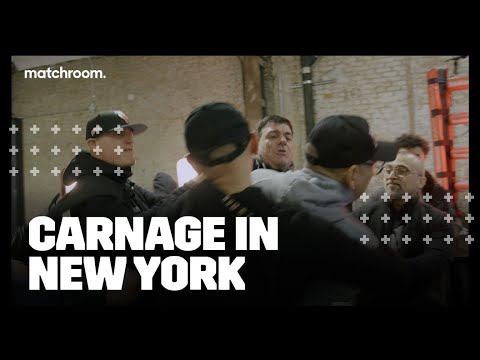 “He’s not a one-punch wonder, and I just feel bad for George Kambosos. Listen, I’m going to stop training him [Teofimo] if my son doesn’t take this guy out in three rounds.

“We’ve done that and been through that, and it makes my son a better fighter. All these chumps in the 135-lb weight division haven’t done s***. This fight with Kambosos, it was taken because we didn’t want to lose the IBF title, and it’s for the undisputed,” Teofimo Sr. said.

It’s pretty evident that Kambosos is in way over his head against Teofimo, and this match ends quickly, particularly if the Australian tries to use his high-volume attack to win rounds.

WBC Franchise title will be up for grabs

[WBC president] Mauricio Sulaiman just talked to me a couple of hours ago, and he told me the WBC Franchise will be on the line, so this fight is for undisputed,” said Teofimo Sr. Then we want Josh Taylor next.

“So take the breaking fight, it’s going to be big, and we can do it where you want. He’s f**** scared. He knows. When you’ve got a kid like my son, Lomachenko felt it. This idiot isn’t going to feel it when he hasn’t done s*** in the sport? Who the f*** has he fought? He [Taylor] hasn’t fought nobody like my son.

“We’re in the same company. Bob Arum is going to make it happen in the spring, so you better be ready, you piece of s***. I’ll go to the UK; I’ll go to his backyard. Screw that mother f****.

“He’s scared, and his legs are not going to be there,” Teofimo Sr. continued about Josh Taylor. “My son is going to walk him down and beat the s*** out of him.

“My son is a 147-pounder, bro. We’ve been at this weight for eight years, draining my son and still beating the s*** out of 135-pounders. We’re still draining him for this fight. We drained him for the Lomachenko fight.

“We drained him for the Commey fight. My son should have been out of the 135-lb weight division two years ago at least, but we’re doing this to show the public and the world that he is great,” said Teofimo Sr.

It’s good to know that Teofimo’s Franchise title will be on the line on Saturday, but that doesn’t change much. There’s not a great deal of interest in this fight because most boxing fans feel that Kambosos will be obliterated.

“Come on, man. That guy can’t even pop a cherry,” said Teofimo Sr. when told that Devin Haney might be able to go up to 140 and do well.

“They don’t got it, and that’s why they’re draining themselves to stay at 135 because they know when they go up to 140, they’re going to get popped up the a**.

“Power doesn’t come from training. Power comes from you, you’re body, and what you can do. My son always had it. I just implemented it and took it out of him,” Teofimo Sr. said.

The size difference between Teofimo Jr. and Kambosos will be huge on Saturday, and it’s hard to imagine that this fight will go more than three rounds. What Teofimo Sr. says about Teo being a true 147-pounder is accurate.

The only reason Teofimo can get away with campaigning at 135 is his youth. Young fighters can drain down to fight divisions that are well below their body size, but it’s something they can’t do forever.

That’s why Teofimo Sr. is talking about this being his son’s last fight at 135 because it’s hard on his body to drain down to make 135, even though it’s only temporary.

“Canelo is the only person that I respect in the game right now that is really doing it, and I want my son to be just like him or better.

“Canelo knows it. He shows his respect and love because one day, that fight could happen. He’s [Canelo] still young. What is he, 31-years-old? Four years from now, he’ll be 35. He’ll still be around, and that’s the fight I want for my son later on four years from now,” said Teofimo Sr.

It’s debatable whether Canelo will still be around in four years because he’s going to get beaten sooner or later. He can’t keep fighting guys like Ilunga Makabu, Caleb Plant, and Billy Joe Saunders without fans saying, ‘Enough’ and wanting Canelo to fight the elite guys. If Canelo starts losing, he’ll likely retire without fighting Teofimo.