Kambosos says Haney vs. JoJo Diaz Jr. winner must face him in Australia

By Sean Jones: Newly crowned IBF, WBA, WBC Franchise & WBO lightweight champion George Kambosos Jr. is now calling the shots, telling the winner of the December 4th fight between WBC 135-lb champion Devin Haney and Joseph ‘JoJo’ Diaz Jr. that they must come to Australia if they want a chance to fight for his four titles.

Kambosos (20-0, 10 KOs) finds himself in the position as the 800-pound gorilla to call the shots after his 12 round split decision win over previously unbeaten undisputed lightweight champion Teofimo Lopez (16-1, 12 KOs) last Saturday night at Madison Square Garden in New York City.

Having four titles all of a sudden gives Kambosos instant credibility that wasn’t previously there for him before his win over Teofimo.

Before his fight with Teofimo, Kambosos was seen as another obscure fighter that many boxing fans had never heard of and wasn’t viewed as a threat to the upper rungs of the lightweight division.

You can argue that Kambosos took advantage of a ring rusty, weight-drained Teofimo, who looked sluggish from the get-g0 last Saturday night, perhaps feeling the effects of long 13-month layoff and from having taken off a lot of water weight to get down to the 135-lb weigh-in limit.

Interestingly, after the fight, Teofimo’s dad announced that Teo would be moving up to 140 because it’s too difficult for him to make 135.

#andthenew Undisputed Champion of The World!

“I believed I would shock the world and win everything. I put on a masterclass performance,” said Kambosos to IFL TV.

“100 percent,” said Kambosos when asked if he’d be interested in fighting the winner of the December 4th fight between WBC lightweight champion Devin Haney and Joseph ‘JoJo’ Diaz Jr. “I’m here to fight the best of the best.

“Whoever the fans want to see, let’s do it, but they’ve got to come see me in Australia. I’ve had to earn my stripes, and I’ve had to go into the backyards year after year, fight after fight.

“Three champions in a row. Mickey Bey’s backyard. Lee Selby’s backyard and the undisputed champion’s backyard in front of a hostile crowd.

“I busted him up, and I deserve to have my homecoming fight back in Australia in front of 80,000 people. And I tell you now; we will fill out that stadium, and it will be something very special. We’re going to relax now,” said Kambosos.

The WBC’s decision to create the Franchise title has devalued their regular WBC champion at 135, making it a less important belt and irrelevant.

Suppose the WBC will refer to Kambosos as the undisputed champion at lightweight without him holding their regular belt. In that case, it essentially means that Devin Haney’s WBC title is a lower value belt.

In that case, Haney might as well toss the strap in the bin and go after Kambosos’ Franchise belt because that’s the title that the sanctioning body values.

“I want to train, but they’re not going to let me train today,” said Kambosos. “We’re going to get better and better, and you’re going to see a better ‘Furious’ when he steps inside those ropes next year.

“It was a war of attrition. Each round was a small battle, round by round. I busted him up round by round, and we’re here now, and we’ve got all the belts.

“When I walked in there [Madison Square Garden], they booed me. They wanted to put my head on a platter.

“But when I stood on the ropes at the end of the fight with my blood pouring out and my cheeks puffed up and bruised, they all clapped and applauded. When the announcement was made, and I won the fight, they applauded.

“I’m the emperor. If they want to come and try to get what I got, but they don’t realize that I’m a stubborn mother f****. If you want to come take what I got, you better be prepared for what Lopez got last night.

“I’m going to become an even better fighter now, that next level, 100 levels better,” said Kambosos. “The fans are supporting me, and I’ve got the world talking. Thank you for the support,” said Kambosos.

It’s a bit early for Kambosos to be calling himself the emperor of the lightweight division. Beating Teofimo was a good start, but he’s got to do more than that for him to be the #1 fighter at 135.

To become the emperor, Kambosos must beat these fighters:

Kambosos doesn’t care about his label

“Whatever it is, it doesn’t bother me. I’ve got all the belts. I’m champion of the world, and I’m the kingpin of the lower divisions and the champions of the world,” said Kambosos when asked if he’s the undisputed champion at 135.

“I’m the emperor, the undisputed, unified; I don’t give a damn. I’ve got everything. I hope last night we gave you a show that made up for the lost time.

“Thank you for the support. It’s good to have that support, and we move on to bigger and better things now,” said Kambosos.

It’ll potentially mean more money for Kambosos if he beat WBC lightweight champion Haney to become the undisputed champion in the true sense.

It’s one thing for the World Boxing Council to be calling Kambosos the undisputed 135-lb champion. Still, he won’t be viewed as the real four-belt champion until he beats the winner of the Haney vs. Joseph ‘JoJo’ Diaz Jr. winner to claim the WBC regular title. 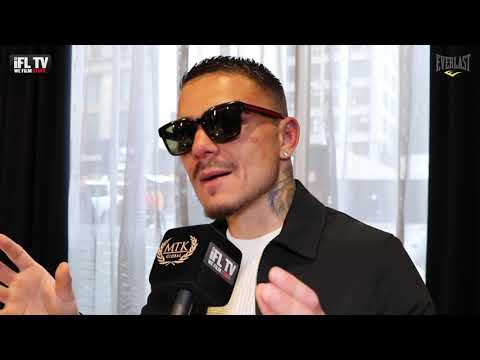