“Everybody knows he won that fight” – says Teofimo Sr. on Lopez Jr’s loss to George Kambosos

By Dan Ambrose: Teofimo Lopez Sr. is convinced that his son should have been given the decision last Saturday night against George Kambosos Jr. at Madison Square Garden in New York.

The judges felt otherwise, giving IBF mandatory Kambosos Jr. the victory by a 12 round split decision, which the crowd at MSG had no problems with.

Unable to admit that his son Teofimo Jr. had been outboxed by the clever Australian Kambosos (20-0, 10 KOs), Lopez Sr. bitterly complained afterward, saying that his son had been “robbed” and “stained” by the defeat.

Interestingly, Lopez Sr. said he has no interest in letting Teofimo fight Kambosos in a rematch. He says he’s going to move up to 140 to go after the undisputed champion Josh Taylor.

For starters, Teofimo will take a tune-up in February at 140 to get adjusted to the light welterweight division before challenging the unbeaten Taylor (18-0, 13 KOs) in the “springtime.”

“Everybody knows he won that fight. Everybody was upset; they booed the decision in MSG,” said Teofimo Lopez Sr. to Secondsout on Teo’s loss to Kambosos.

“To me, he won unanimous, but you can put it at ten to two, nine to three because of the knockdown [in round one],” said Teofimo Sr. on his view that Teo deserved a wide decision win over Kambosos.

“It was a flash knockdown [in the first round], but there’s no way this kid [Kambosos] beat us. So, we’re [Teofimo Jr] going to move on to better things, bigger fights, and this is not going to stain my son.

“Everybody is going to fill out the arenas for him, and that’s all I’m concerned about.

“I should have stood with Top Rank because those are the people that really love us. You learn from your mistakes.

“So we go back to Top Rank, and two pay-per-view fights next year, and then the ESPN fight. Everybody knows what happened,” said Teofimo Lopez Sr.

Teofimo Sr. is probably right about Teo selling out arenas after this loss, but if he continues to lose, his popularity will dim quickly. Kambosos is a good fighter, but let’s not get things twisted.

The top lightweights will  target Kambosos

Those guys would be dangerous for Kambosos because they wouldn’t run out of gas after three rounds as Teofimo did, and all of them are intelligent inside the ring.

Had that been those guys inside the ring with Kambosos last Saturday night, they likely would have beaten him. The only reason Teofimo lost is that he gassed out almost immediately, couldn’t throw combinations, and did a terrible job of cutting off the ring. Even small things like dealing with the holding.

A more experienced fighter wouldn’t have allowed Kambosos to hold as much as he did without hammering him with point-blank shots to the head while being clinched.

Teofimo looked clueless on what to do with all the clinching that Kambosos was using to prevent him from throwing punches.

It wasn’t a flash knockdown in the first, as Teofimo Sr. says about his son. Kambosos nailed Teofimo with a straight right hand, and he wasn’t expecting to be hit.

The shot from Kambosos landed flush on the jaw of Teofimo, sending him down on the canvas like a bowling pin.

“In this game, you have to knock everybody out,” said Teofimo Sr. “If you don’t knock them out, this is what happens. It was a complete robbery,” said Lopez Sr. on the results of the Kambosos fight.

“It is going to stain us because now we can’t say we’re better than Floyd Mayweather because now Floyd is going to say we got that loss. Listen, it doesn’t really matter. He’s [Teofimo] is the people’s champ.

“We dictated the fight from the beginning aggressively. Everybody is saying he [Teofimo] won nine to three, ten to two. The whole arena [Madison Square Garden] saw it, and it was disgusting.

“I could not believe what they just did to us, but you know what? They just stained us.

“We’re going to go up to 140 and get a fight in February, and then fight [undisputed light welterweight champion] Josh Taylor in the springtime. We’re still going to do what we said we were going to do.

“Everything can be bought, and that’s why I teach my boy that you got to take them out.

“If you don’t take them out, they can do something to us. He’s happy, I’m happy, and you know why? Because he’s the people’s champ,” said Teofimo Sr.

There’s no question that this loss stains Teofimo because he looked terrible on many levels.

It wasn’t just the fact that such a HUGE underdog beat Teo in Kambosos, but the way was beaten up around the face, knocked down, out-boxed, and then gassed out in the second half. 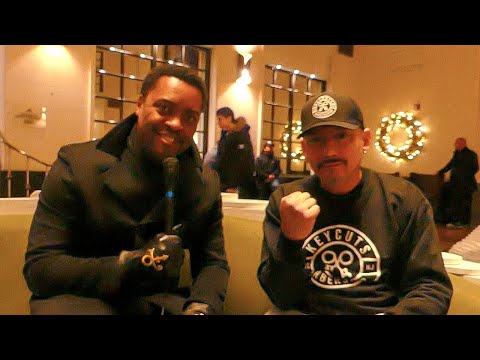