By Jeff Aronow: David Benavidez weighed in at 169 pounds on Friday for his 10 round fight against Kyrone Davis this Saturday night at the Footprint Center in Phoenix. Arizona. 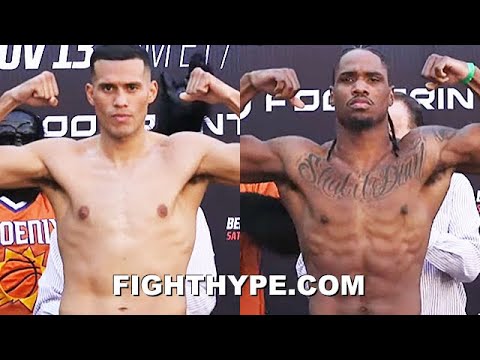 During the face-off, the former two-time WBC super middleweight champion Benavidez (24-0, 21 KOs) smiled at the 27-year-old Davis the whole time and appeared to unnerve him.

Later when Benavidez attempted a second face-off, Davis wanted no part of it and walked away. You could tell that he was uncomfortable with the face-off process with Benavidez and didn’t want to continue.

Benavidez is a big favorite to defeat Davis, who was brought in as the replacement opponent after Jose Uzcategui tested positive for a banned substance.

“He tried to fight Canelo the same way he fought Uzcategui, but that’s the only style he has,” said Benavidez to Fight Hub TV in reacting to Canelo’s win over Caleb Plant.

“He’s [Plant] not the type of fighter that if he needs to be in a brawl and stand there and have a shoot out because he doesn’t have the power.

“I feel if Canelo doesn’t respect your power, he’s just going to walk you down and eventually land his shot.

“Everybody wants to fight, but if they want me to go through all those guys, that’s exactly what I’ll do,” said Benavidez when told about a possible tournament to decide an opponent for Canelo.

“I’ll fight Anthony Dirrell again and [Jermall] Charlo too if that’s what it needs to happen for me to fight Canelo. I don’t mind doing that because I feel I’ll beat those guys anyway, and I’m very confident in myself.

“I’m willing to put up a chance to fight Canelo after, so I’ll fight all these guys,” said Benavidez. “I feel like that’s definitely what the division needs. You don’t need to give handouts.

“I’ve earned the spot, but if I have to fight those guys to get past it, then that’s what I’m going to do,” said Benavidez.


« Murodjon Akhmadaliev defends against José Velásquez on Nov.19th on Dazn