In the first round Lopez dominated until the final seconds when a counter right off a Lopez jab from Kambosos on the chin dropped Lopez for a 8-count from referee Harvey Dock. In the second round Lopez came back well but Kambosos seemed to outland him overall. In the third round Lopez kept coming forward while Kambosos had his feet planted countering with rights.

In the fourth and fifth rounds both had their moments with Kambosos finishing stronger to take the round. In the sixth round Kambosos suffered a cut on his left eyebrow. In the seventh round the jab followed by right’s had blood coming from the mouth of Lopez. In the eighth round it was close with blood coming from the nose of Lopez who seemed to do enough to win the round finishing the stronger of the two.

In the ninth round Lopez had his best round of the fight out landing Kambosos having him on the defense for the most part. In the tenth round a chopping right from Lopez on the chin dropped Kambosos who was pulling away for an 8-count from referee Dock. He managed to get through the round.

In the eleventh round Lopez suffered a bad cut on his left eyebrow from a Kambosos right. Kambosos dominated the round with the ring physician brought in to check the cut. In the twelfth and final round both were throwing bombs and both bleeding especially Lopez more so as Kambosos stood his ground landing rights.

Kambosos gave Lopez credit for a good fight but Lopez acted just the opposite thinking he got robbed.

In the first round it was all Ogawa and at the end landed his best punch a right on the chin of Fuzile. In the second round it was almost identical as the first even the finish with Ogawa landing a big right hand on the chin of Fuzile causing blood coming from his nose. In the third round Ogawa continued to outwork Fuzile. In the final twenty seconds a jab from Fuzile knocked back the head of Ogawa who came back landing a combination to the head of Fuzile. 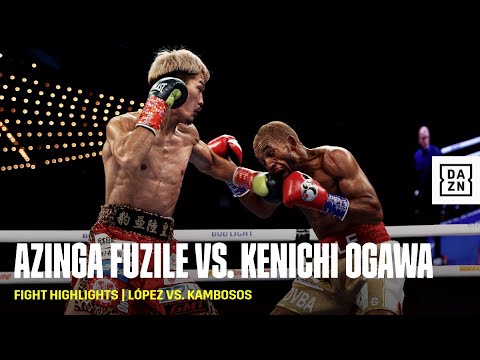 In the fourth round Ogawa dominated against Fuzile who used the shoulder roll to avoid most of the punches but delivered little. In the fifth round at the halfway point a right from Ogawa on the chin staggered Fuzile who took a knee to avoid any more punches for an 8 count from referee Ron Lipton. He got up with blood from the nose and mouth and ran the rest of the round. In the sixth and seventh rounds Fuzile did continue on his bike as Ogawa chased taking the round.

In the eighth round Fuzile with his head clear came back well enough to take the round. In the ninth round Fuzile suffered a cut on his right eyebrow from an Ogawa right. In the tenth round Fuzile did well but a clash of heads in the final seconds opened up yet another cut this one on the left eyelid.

In the eleventh round Ogawa continued to win round after round right from Ogawa on the chin dropped Fuzile for an 8-count by referee Lipton from a delay as he dropped to a knee. Seconds later again Fuzile landed a right on the chin with a delayed knockdown. Again another 8-count from referee Lipton. Fuzile showed a lot of courage losing quite a bit of blood throughout the fight.

In the first round Ford was the aggressor who landed a 3-punch combination against Caraballo who came back seconds later with a right of his own to the chin of Ford. Round was for Ford. In the second round Ford spent time against ropes allowing Caraballo to have landed a flurry of punches mostly blocked. In the final minute it was Ford who landed a 3-punch combination against Ford. In the third round Ford controlled until he got a warning from referee Ricky Gonzalez for holding behind the head of Caraballo. Caraballo had his moments with a minute remaining landing a hard right to the head of Ford.

In the fourth round both had their moments, with Ford landing a countering right to the side of the head of Caraballo stunning him in the final seconds of the round. In the fifth round Ford did well in the middle of the ring but allows Caraballo to back him against the ropes where he goes to the body of Ford. 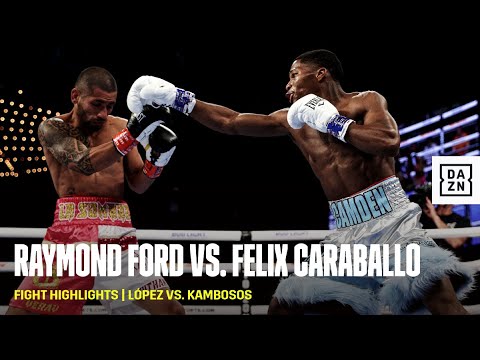 In the Sixth round it was all Ford who lands a flurry of punching with Caraballo covering up plodding forward but throwing few punches suffering swelling above his left eye. In the seventh round it was all Ford with little coming back from Caraballo except once in the final minute. In the eighth round Ford landed a dozen unanswered punches mostly to the body of Caraballo causing referee Ricky Gonzalez to step in and call a halt. Possible quick stoppage?

Caraballo hadn’t won a round. Ford dominated but with questionable power. Caraballo had lost his two previous fights.

In the first round Lewis outworked Zhang who stalked but threw few punches. In the second round Zhang maneuvered Lewis to a corner and landed an overhand left on the chin of Lewis who went down for an 8-count from Referee Shada Murdaugh. Lewis wobbled to his corner when the fight continued. Zhang stalked Lewis against the ropes and again landed a left on the head dropping Lewis again for an 8-count when the corner of Lewis wisely called a halt.

Lewis had not fought in over 2 years and had lost his last 3 fights and was brought in as a record builder for Zhang. It was the first time Lewis was ever stopped. 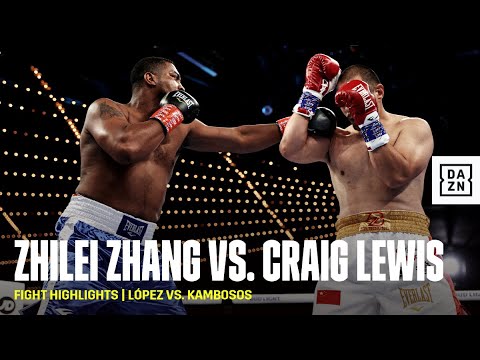