By Barry Holbrook: Eddie Hearn says he’s planning on bringing the Anthony Joshua vs. Oleksandr Usyk rematch back to the UK in London at either Tottenham Hotspurs Stadium or Wembley in March or April

Hearn said he’ll be meeting with IBF/WBA/WBO heavyweight champion Usyk’s promoter Alex Krassyuk this week to discuss the location for the fight. Krassyuk mentioned wanting to stage the rematch in Ukraine, the UK, or the Middle East.

Understandably, Hearn isn’t interested in those places. Joshua doesn’t fight well outside of the UK, and it’s important that he wins the rematch.

And Joshua can’t afford to be spaced out walking into the ring to face Usyk in Ukraine or the Middle East, as we saw in his loss to Andy Ruiz Jr. in New York in 2019.

Joshua vs. Usyk heading towards London

The winner, which Hearn admits that he’s hoping will be his fighter Whyte (28-2, 19 KOs), will then face the Joshua vs. Usyk winner for the undisputed championship. Hearn says his ideal scenario would be for Joshua to beat Usyk and Whyte to defeat Fury.

That would be two of Hearn’s Matchroom fighters in Joshua and Whyte squaring off for the undisputed heavyweight championship. It would only be Hearn’s hands on the gearshift of the promotion for a Whyte vs. Joshua 2 rematch.

“I think it’ll be in the UK really. The last time out at Tottenham was a stunning event, and I think that I’d like to do that again. I’d like to bring it to Wembley or Tottenham again,” said Eddie Hearn to Boxing Social about the location for the AJ vs. Usyk rematch.

“We’ll definitely talk to him [Usyk’s promoter Alex Krassyuk] about Ukraine and the Middle East, of course,” said Hearn. “We’ll be aggressive for that fight.

“I don’t think AJ really minds where that fight takes place, but we will start those discussions shortly. We’ve got a mad run coming up, but we’ll get together me and Alex and start planning the fight.

“It’ll be twice the size, but we didn’t expect it to go around like that,” said Hearn when asked about how big a fight between Joshua and Tyson Fury will be if AJ defeats Usyk in the rematch.

“Dillian is a very live dog against Tyson Fury, and hopefully the WBC orders that next week. I believe Joshua can beat Usyk. Listen, it’s a funny old game the way things come around in circles, but, of course, if that were the situation, it would be a huge fight.

“But Dillian against Anthony Joshua for the undisputed. The rematch is also a massive fight, and obviously, that’s a scenario we prefer,” said Hearn.

Whyte is too basic for him to be counted on to defeat Fury, and his style is a duplicate of Dereck Chisora. We saw what Fury did to Chisora in their two fights. 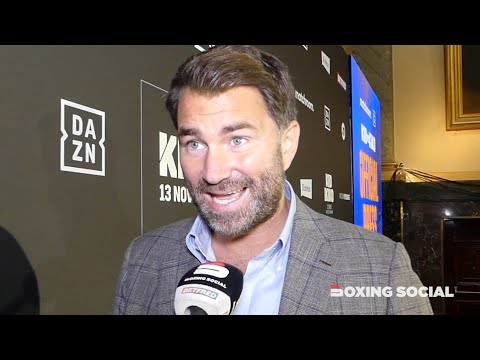 
« Kid Galahad statement on loss to Kiko Martinez, says “We will run it back”