Tyson Fury heated up after press conference with Deontay Wilder

When it came time for the traditional face-off between the 6’7″ Deontay and Fury, Top Rank promoter Bob Arum nixed that idea, telling both fighters that there wouldn’t be a face-off.

Fury looked like he hadn’t been told ahead of time, so it was a surprise to him that he couldn’t face off with Wilder.

Fury (30-0-1, 21 KOs) spent the last portion of the press conference talking over Wilder (42-1-1, 41 KOs), not letting him finish his statement when he said he didn’t regret saying he felt he cheated during their fight last year.

Although Fury won’t admit that he was angry, he was looked agitated, and he wasn’t going to let Wilder speak without interrupting him.

It didn’t help that the FOX host Kate Abdo lost control over the press conference and let Fury interrupt Wilder when it was supposed to be his turn to talk. It was like watching a presidential debate where one pushy candidate wouldn’t let the other one talk.

Even after the press conference was over, Fury was still troubled, and you could tell that Wilder had gotten to him with his snarky comments. Fury shouldn’t have been angry if what Wilder was saying wasn’t true, but who knows?

‘The Gypsy King’ Fury and ‘The Bronze Bomber’ will be meeting in the main event on Saturday at the T-Mobile Arena in Las Vegas. The fight card will be shown on ESPN+ pay-per-view and FOX Sports PPV.

“Because he’s mentally weak. I live in his mind rent-free,” said Fury after Wednesday’s press conference when asked why Wilder hasn’t accepted his loss to him.

“You saw here today. He can’t compete with me. All the stuff he spouted, he has no answers for.

“He can’t answer the questions. For sure, he’s at a severe disadvantage because he’s done all these accusations, and now he’s got it all the back up.

“If the case was that I did all the cheating that he said I did, then all he’s got to do is make sure there’s no cheating being done and turn up and win the fight.

“If he doesn’t do that, then he’s completely done for. His legacy is in bits right now.

“It was all good because any man can lose a fight but not come out with a load of rubbish excuses he comes out with.

“That tarnishes a man’s legacy completely. I’m already the King of boxing—the heavyweight champion of the world, the lineal, Ring, WBC.

“You can’t beat that—undefeated heavyweight champion of the world, me. I’m the undefeated champion in boxing already. I don’t need to win another fight to prove it. I’m already that man,” said Fury.

Hopefully, Fury can keep a lid on it on Saturday night and not continue to blow his stack. If he’s going to fight angry, he won’t last long against Wilder.

“He says he’s a religious man,” said Fury. “You heard him say, ‘An eye for an eye and a tooth for a tooth. Let me tell you.

“If someone strikes you on the left cheek, turn to the right to let them strike that also. I don’t believe in an eye for an eye and a tooth for a tooth. That’s done for. The way I see it, I’m doing what I love to do, and I’m getting paid for it. I’m really happy.

“Find out Saturday night,” said Fury when asked if he’s going to go straight at Wilder on Saturday.

“I don’t care. For one, he’s a loser,” said Fury about Wilder’s trainer Malik Scott coming up with a game plan to defeat him.

“Wilder doesn’t respect him because he’s already knocked him out in 30 seconds.

“So now is he going to take no to a man he’s already knocked out? It’s like me getting some guy I knocked out in one round and saying, ‘You know what, guy? Please train me because you can teach me,’ but I knocked him out in ten seconds.

“That’s just not relevant. I don’t think he [Malik Scott] can [train Wilder], but we’re going to find out Saturday night,” said Fury.

That’s an interesting turnabout for Fury in being guarded about his game plan. After all, Fury has been bragging during the run-up to the fight with that he has no fears about letting Wilder know what his game plan is, but then all of a sudden, he gets secretive.

Is that a sign of worry that Charles Brun detects from Fury? He may have sized Wilder up when they stood on the stage and noted how dangerous he looked as if he was ready to bounce on him and rip him to shreds. 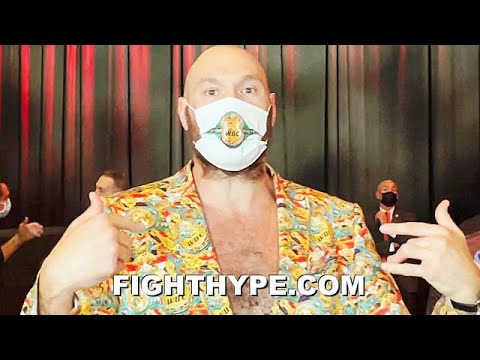