Three Historical Fights Where Victory Was Snatched Away!

By Ken Hissner: There were three historical fights this writer remembers well, as do thousands of fight fans. The first would be Marciano and Walcott.

It was September 23rd in 1952 when the challenger Rocky Marciano entered the ring at 42-0 with 38 by knockouts. “The Brockton Blockbuster” from Massachusetts as he was known was facing the champion, Camden, New Jersey’s NBA champion “Jersey” Joe Walcott, 49-18-1 with 31 knockouts.

Marciano was on a seven-fight knockout streak and the underdog coming in. Walcott was coming off a three-fight series with champion Ezzard “The Cincinnati Cobra” Charles, 69-5-1. Walcott had lost to Rex Layne, 25-1-2, yet got a title fight with Charles where he was knocked down in the ninth round and lost by a large margin 80-70, 84-66, and 83-67. How he got a rematch is a mystery. It took place at the Olympia Stadium in Detroit, Michigan.

In the rematch four months later, Walcott was ahead on the scorecards 5-1, 4-1, and 3-3 when he scored a knockout in the seventh round to take the NBA title from Charles. It took place at Forbes Field in Pittsburgh, PA. It would be almost a year in their third encounter when he took a close decision by scores of 9-6, 8-7, and 7-6. It took place at Municipal Stadium in Philadelphia, PA.

It was at Municipal Stadium in Philadelphia, PA, as previously mentioned in 1952, when Walcott would defend his title against Marciano. After twelve rounds, Walcott was well ahead and on his way to victory on the scorecards by 7-4, 8-4, and 7-5. Marciano would need a knockout to take the title from Walcott going into the thirteenth round. The crushing blow that Marciano landed on the chin of Walcott has been shown many, many times. The face of Walcott was so distorted you would think his head would be knocked off!

In the Walcott dressing room after the fight Hank Cisco, a stablemate of Marciano’s, informed this writer he heard the ring physician say, “this man should never fight again.” He had a cheekbone broken, and though he should have retired, the mob who controlled Walcott knew a big payday could be made betting on Marciano, whom the Walcott fans felt he would win a rematch being well ahead except for that “lucky punch!”

This writer’s first fight he ever watched was the rematch at the age of nine on my parent’s T.V. At the Chicago Stadium, in Chicago, IL, it only took 2:25 of the first round when Marciano would make his first defense a success! Walcott immediately retired after the fight.

Marciano would make five more defenses ending his career at 49-0 with 43 by knockout. His final fight was against light heavyweight champion Archie “Old Mongoose” Moore, 149-19-8, coming off the canvas in the fourth round to score knockdowns twice in the sixth, once in the eighth before scoring a knockout in the ninth round.

The second fight this writer remembers was June 18th in 1942, at the Polo Grounds in New York when heavyweight champion Joe “The Brown Bomber” Louis, 49-1, defended his title against the light heavyweight champion Billy “Pittsburgh Kid” Conn, 58-9-1. Louis weighed 199 ½, to Conn’s 174.

Conn was a “cutie” who boxed well enough for twelve rounds to be ahead on the scorecards 7-5, 6-6, and 7-4. The cocky Irishman wanted to take the title not by decision but by knockout and came out firing instead of continuing boxing when Louis lowered the boom knocking Conn out at 2:58 of the thirteenth round! This writer met Conn years later in Scranton, PA, and said how foolish he was to go for the knockout.

Both Louis and Conn would enter the Army eventually though Louis would go on to make four more defenses, all by knockout. Conn would win three fights by decision, with the final one over the former middleweight champion Tony “Man of Steele” Zale, 51-15-2.

On June 19th, 1946, the rematch between Louis and Conn took place at Yankee Stadium, New York. It was almost five years to the day since their first meeting. Louis was well ahead before scoring a knockout in the eighth round. It was his twenty-second title defense. 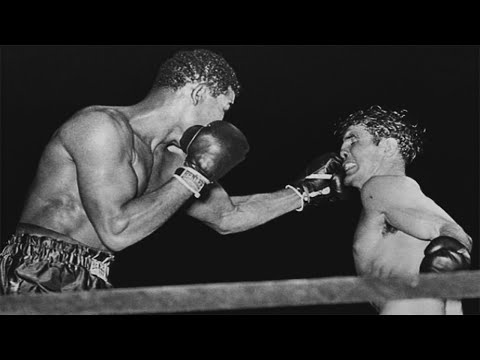 Taylor was upsetting the unbeaten champion on the scorecards going into the twelfth and final round by scores of 107-102, 108-101, and behind 105-104. All he had to do was last three more minutes, and both titles were his!

Near the end of the twelfth round, Chavez had Taylor pinned in a neutral corner when Taylor’s co-trainer Lou Duva started up the steps. Whether it was to congratulate Taylor or stop the fight, we don’t know. The other trainer of Taylor’s George Benton stood outside the ring.

While referee Richard Steele was watching the punches from Chavez against Taylor, Taylor took his eye off both, seeing Duva coming up the steps. Steele mistook it as Taylor quitting or Duva stopping it and waved it off with just two seconds remaining at 2:58 of the final round, cheating Taylor of victory. Talk about a title win being snatched from someone. It was Taylor!

Chavez would go on to win his next five fights before losing to the 1992 Olympic Gold Medalist Oscar “Golden Boy” De La Hoya, 21-0, by stoppage in four rounds. It took place at Caesars Palace, in Las Vegas, Nevada, on June 7th, 1996.

Marciano, Walcott, Louis, Conn, and Chavez would all be inducted into the International Boxing Hall of Fame. This writer hopes these three historical battles will bring back many memories to fight fans!