By Jim Maltzman: Ricky Hatton predicts WBC heavyweight champion Tyson Fury will demolish the always dangerous challenger Deontay ‘Bronze Bomber’ Wilder (42-1-1, 41 KOs) in the same manner as he did a year ago when the two meet on October 9th in their trilogy fight.

The former two-division world champion Hatton believes Wilder is mentally damaged from his terrible seventh round knockout defeat at the hands of Fury in February 2020.

Still shaken from the loss, Wilder has changed his training team and is trying to adopt a new fighting style in an eight-week cram course camp.

It doesn’t become second nature with any new change, and the chances are Wilder will spend most of the time fighting as he always had by throwing right-hand bombs.

Fury did mental damage to Wilder

“I think more mental damage to Deontay that Tyson did than I think we’re letting on,” said Ricky Hatton to BT Sport Boxing. “He [Wilder] questioned the corner work that was me. I think he said I put metal plates in the gloves, and what’s going on there?

“Mark Breland, who is a former world champion in his own right, and he said he put something in his water,” said Hatton about what Wilder was saying.

“Some of the stuff that was coming out. I don’t know if Deontay mentally struggled to accept [the loss]. He was the destroyer, Deontay. He was knocking everybody out and destroying everyone.

“Then, all of a sudden, he got destroyed. He’s been looking better on the pads now, warming up for the third fight [with Fury].

“So he might have mentally got himself back on track. I was just blown away by the statements he was saying about myself, Mark Breland, and other things. I think he was struggling to come to terms with his defeat,” said Hatton.

It’s pretty clear that Fury’s win over Wilder damaged the Alabama native mentally, resulting in him blaming others for his failures inside the ring.

Unable to face the truth, Wilder has come up with a whole host of excuses in trying to make sense of what happened to him.

Hatton: Tyson will be sharp as ever

“Tyson has got to be very, very wary,” said Hatton when asked about what does Fury have to focus on for the trilogy clash with Wilder.

“Obviously, one thing Deontay has proved in the first fight and even before the fight was mentioned, he holds such murderous punching power. Tyson knows Deontay can knock him on his a**.

“He’s got to go in there with that attitude. No complacency. I think if he does that, he’ll do the same as he did in the last fight.

“But Tyson, the one good thing is his boxing brain. I don’t think he’ll allow himself to take his eye off the ball.

“I think he’ll go in there as sharp as ever with a point to prove, and I think he’ll [Fury] do a similar job as he did in the last fight,” said Hatton in predicting Fury destroys Wilder as he did in February 2020.

Unless Wilder can get lucky with one of the right-hand bombs that he throws, he’s going to go down to defeat for the second time.

For Wilder to land with any degree of success, he’s going to need to take some of the power off his shots. He can’t throw with 100% power and expect to land his right hand often enough to knock out Fury.

The thing is, if Wilder takes power off his shots, he won’t be able to hurt Fury. 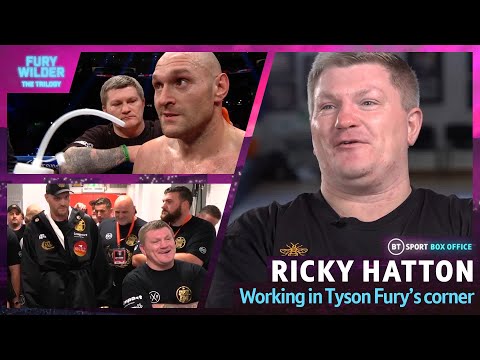