Herring, 35, apologized to his fans after the loss, congratulating Stevenson for his win, but he’s unsure which direction to go in with his career.

At 35-years-old, Herring isn’t young enough to slowly work his way into another title shot in two or three years. It might take a long time for Herring to get another title shot, and it’s unclear whether he can beat the young lions to get that opportunity.

The 24-year-old Stevenson was too fast, too accurate and too sharp for Herring last Saturday night. Shakur was picking Herring apart on the outside with his lightning-fast jab and single shots.

When Herring took the fight to the inside in the second half, Stevenson surprisingly proved to be the better fighter in that area too.

When the referee would separate them, Shakur would quickly fire off three-punch combinations before Herring could react. We saw this pattern repeatedly happen in the second part of the fight.

Referee Mark Nelson stepped in and stopped the fight in the 10th round after Shakur rattled off an avalanche of punches to the head of the bleeding Herring, who had been cut over his right eye moments earlier.

Herring thinking about his family

“I got to think about my family. I don’t know,” said Jamel Herring when interviewed after his loss to Stevenson. “Of course, my man BoMac wants me to wipe myself off and go back to the gym.

“There’s just no quit in me. I’ve been labeled as everything. I wanted to show that I would push through everything. At the same time, I do have to think about my family, especially my mom, my two daughters, who have autism.

“Like I said, no one expected me to get this far. I’m just grateful. I’ve got to wait and see what happens next.

Congratulations to Shakur Stevenson,” said Herring. “I want to apologize to everybody. I tried. My apologies; I tried. He’s sharp and slick,” Herring said of Shakur.

“His eye coordination is very good. I have no excuses. He was the better man tonight.

“I started slow, but as I said yesterday, I can’t do the chess match with him. I had to bite down, show that grittiness and push forward,” said Herring.

If Herring wants a title shot, he’s going to have to put the time in and likely win a title eliminator against one of these contenders at 130:

“He’s going to take over and continue being great,” said Herring on what he sees in the future of Shakur Stevenson. “No hard feelings. We made up; we’re not friends.

“Shakur will do great things. I have nothing against him. I know some people had a bad picture of him, but he’s not a bad dude.

“He’s a good kid, and that’s why I never took it personally. I just hope Shakur keeps doing what he do and gets the bigger fights, and I’ll enjoy being a fan and watching him behind the scenes.

I just want to thank everyone for their endless support. Congratulations to @ShakurStevenson, he was the better man, and even when I knew I was down I tired my hardest to push forward, no matter what. There was no quit in me, but overall I wish Shakur the best! Thank you all 🙏🏾

“He was younger faster, and he was sharp,” said Herring’s trainer BoMac McIntyre in talking about Shakur.

“He was sharp tonight. I take my hat off to Shakur and the whole team over there. And I didn’t expect that [Stevenson staying in the trenches].

“I thought he was going to move like in his last fight [against Jeremia Nakathilia] and another couple of fights.

“But hey, they had a good game plan, he executed, and he got the win,” said BoMac about Shakur.

We’ll see if Shakur can “take over” the super featherweight division. It’ll depend on Stevenson’s promoters at Top Rank, who will need to set up fights against these fighters:

Those are some exciting options available for Shakur at 130, but it’s questionable whether Stevenson will stay in the division long enough to fight more than one or two of them.

Shakur is likely to move up to 135 soon and go after the big names in that division, as that’s where the money is.

The super featherweight division isn’t popular with the boxing public in the U.S, and Stevenson can make a lot more money if he heads North to the lightweight division to take on Devin Haney, Teofimo Lopez, Gervonta ‘Tank’ Davis, Vasily Lomachenko, and Ryan Garcia.

It’s questionable whether Stevenson can beat Lomachenko or Tank Davis. Those guys are unique, and they would know how to deal with Shakur’s hand speed and sharp punching.

Top Rank boss Bob Arum might be hesitant at letting Shakur mix it up with Lomachenko and Tank, knowing what could happen to him if he makes those fights.

Stevenson has looked great at 126 and 130, but it might be a whole different kettle of fish at lightweight if he faces the wrong guy.

It’s good that Stevenson held his ground against Herring last night, as his tendency to ‘pull back’ repeatedly to avoid taking shots has annoyed the fans in some of his essential fights.

This isn’t just something that popped up for Stevenson against Jeremia Nakathilia in his last contest.

Shakur has used his safety-first fighting style since he turned pro, and it’s only recently that fans are taking notice due to the upgrade in his opposition. 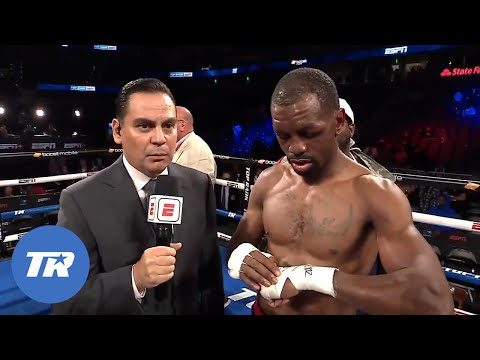 Dillian Whyte says Fury “slowing down,” expects to fight him next »