Scott is impressed with the boxing ability of Plant (21-0, 12 KOs), who is like another Floyd Mayweather  Jr., and he’s got the perfect style to take Canelo to school the same way Floyd did.

What does concern Malik about Plant is whether his stamina will hold out into the championship rounds against Canelo, as he ran out of gas late against Caleb Truax and Jose Uzcategui.

We saw that in Canelo’s last fight against WBO champion Billy Joe Saunders last May.

Billy Joe was making a monkey out of Canelo in rounds one through six, but he got tired in the seventh and suffered a fractured orbital bone in the eighth.

Plant is willing to  disturb Canelo

“What I like about is that Caleb isn’t playing a game. He’s not playing the opponent game,” said Malik Scott to Fighthype. “He’s willing to disturb Canelo, even if it means him smacking or getting smacked or whatever that was.

“So if he’s able to implement everything that he’s good at doing like the slick stuff and all of that.

“He’s going to give Canelo some issues. The thing is when it goes into the seventh, eighth, ninth, and tenth rounds, can he continue to stay alert?

“Boxing guys like Canelo, you can never take your foot off the gas ever. For him to be his age, he’s seen every style of boxing and dealt with it.

“Whether you felt he won fights or not, he’s dealt with it. No one has ever walked through Canelo ever, and he’s fought good fighters, great fighters,” said Scott.

Plant isn’t just giving Canelo grief because he’s trying to get into his head. He seems to despise what he stands for, with him testing positive for a PED in the past and winning controversial decisions repeatedly while fighting in Las Vegas.

That’s not the way Plant is wired. He’s a guy no-nonsense old-fashioned guy who doesn’t believe in being helped out by judges or putting anything into his body that shouldn’t be there to try and gain an edge against his opposition.

Plant would have fit in perfectly in the past, fighting during the era of old school fighters like Jack Dempsey, Joe Louis, Sugar Ray Robinson, and Jack Johnson.

Malik leaning towards Canelo to win

In my opinion, GGG [Gennadiy Golovkin] is basically non-existent since the two fights with Canelo,” said Scott. “Like that comes from that.

“Did he get beat up or destroyed physically? No. But just those two fights, the training he put in, the emotional energy he put into them.

“The way that Canelo handled them. A lot of that makes you not want to get up and run in the morning.

“A lot of that makes you want to say, ‘Ah, another one?’ Because why aren’t these guys busy like that? Why?

“Great fighters are not busy like that.  To me, it’s because he [GGG] really doesn’t have that same urge that he once had, and I grant that to fighting Canelo those two times.

“If I were a betting man, I’d go with Canelo, but it’s all about whether Caleb can do everything I know he can do.

“The thing is, I’ve never seen him do it on a high level. I’ve seen Canelo at that level before,” said Scott.

Right now, the whole world is picking Canelo to win the fight because he’s viewed as the #1 fighter in boxing, but that doesn’t mean he can’t lose to Plant.

We saw Canelo essentially get beaten by Erislandy Lara, Austin Trout, Miguel Cotto, and Gennadiy Golovkin twice. Canelo should have more losses on his record, but his popularity is likely saving him from losing.

Plant is more than capable of doing what those fighters did to Canelo, but doing it in a more decisive way where he would embarrass the judges if they DON’T give him the win.

If you think the judges that scored the first Canelo vs. Golovkin fight were criticized by the boxing world, wait and see how fans jump on them if they rob Plant.

That’s why the judges should call it the way they see it and forget about Canelo’s popularity.

This isn’t professional wrestling where the famous guys ALWAYS win. Boxing is supposed to be a sport, and once you turn into a popularity contest where the guy with the most fans wins always, it degrades it.

“Plant has shown me so much, and I like his pizzaz,” Malik said. “I’ve seen him knock guys out to the body.

“I’ve just not seen have do it on that level. For me to think you’ve got a chance to beat Floyd Mayweather, I’ve got to see you at the high-level handling guys under him.

“But I don’t consider [Jose] Uzcategui on  Canelo’s level. Good fighter, though. I’ll say that Caleb has got his hands full, and if Canelo is not on point, he’ll have a long night, though.

“I think Canelo really wants to hurt him, and I think when Canelo feels the way he feels about Plant, it makes him even better,” said Scott.

After watching Canelo go after Plant during the kick-off press conference two weeks ago in Los Angeles, it’s fair to say that he wants to hurt the Tennessean badly. He bloodied Plant’s right eye, and fortunately, it wasn’t a bad cut.

Canelo’s desire to hurt Plant will worsen with each press conference because he will continue to be trash-talked and reminded about his past positive drug test for the banned substance clenbuterol.

Plant knows how to anger Canelo, and he will make sure that he continues to push his hot buttons. In other words, his previous six-month drug suspension and the different fighters that have tested positive for banned substances working out under the same trainer Eddy Reynoso out of San Diego, California.

With Canelo’s stamina problems, he can’t afford to get too angry at Plant because if he runs out of gas against him, he’s going to get picked apart by the accurate shots that he throws.

Plant has a laser left hook that is dangerous and fast, and his jab is easily the best in the 168-lb division. If Canelo runs out of gas against Plant, he’s going to be in for a world of hurt.

The way that Floyd Mayweather Jr. made Canelo look like a rank amateur will be nothing compared to what Plant can and will do to him if he fades against him.

Whatever Canelo has been doing to take care of his stamina problems that used to be a problem for him put until 2020, he needs to keep doing it as long as it’s legal.

Saunders had success with Alvarez

“A lot of people with the Billy Joe Saunders fight and Canelo fight,” Scott said.  “We’ll say surface-wise, he was actually beating Canelo in some of those rounds.

“But just because you’re winning rounds doesn’t mean the energy of the fight is going your way.

“Even though Billy Joe was doing some good things in the round, the energy and the momentum of the fight was going towards Canelo, and he eventually caught up to him.

“Most of his success is from a high guard. Does he get hit through a high guard sometimes?

“Yeah, but even people that got other kinds of defenses to get hit through that guard as well.

“But it’s almost like he’s a target to get hit, he’s not easy to get hit, but can’t nobody never really beat him up, and he’s been in there with a lot [of top fighters].

“You got to be a little bit awkward built, and I even think he’s seen fighters like that.

The former two-division world champion Billy Joe Saunders could have possibly beaten Canelo if he’d not run out of gas after seven rounds, but he looked like he had nothing left by the eighth.

Although Billy Joe is still young at 32, he’s an OLD 32, and he was nowhere the fighter he’d been four years earlier when he defeated David Lemieux in 2017.

That version of Saunders would have beaten Canelo, but the Mexican star and his promoters at Golden Boy Promotions wanted no part of fighting him back then. It was only until Billy Joe got older and slowed down that Canelo chose to fight him.

Other than running out of gas, the other big mistake Saunders made against Canelo was leaning forward with his hands down by his sides.

He was trying to lure Canelo to throw punches, but he didn’t have the reflexes to get out of the way of the Mexican star’s uppercuts, which is why he suffered his eye injury in the eighth. 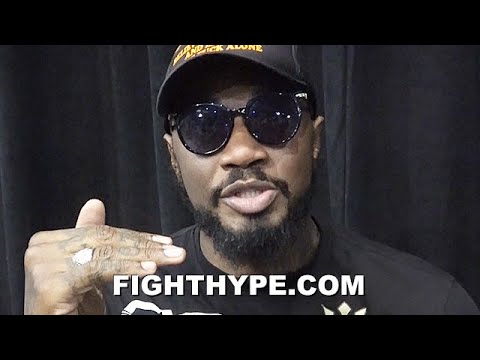 Tyson Fury not interested in Dillian Whyte being his WBC mandatory »