Eddie Hearn expects Tyson Fury vs. Dillian  Whyte to be ordered at WBC’s next convention in November

By Barry Holbrook: Eddie Hearn says he expects the fight between WBC heavyweight champion Tyson Fury and interim champion Dillian Whyte to be officially ordered by the World Boxing Council at their convention next month on November 14th to 19th.

Hearn is confident that once the WBC orders the Fury-Whyte fight, he’ll be able to negotiate a deal quickly to get the match done for early 2022.

He doesn’t believe Fury (31-0-1, 22 KOs) will try to avert the fight with Whyte by going the Franchise route with the WBC, as he feels that it’s the biggest match out there for him.

Hearn wants to stage the Fury vs. Whyte fight in the UK in a large stadium, believing it’ll do well.

Whyte (28-2,19 KOs) has taken some flak from boxing fans for pulling out of his October 30th fight against Otto Wallin with his shoulder injury excuse. Fans believe the 33-year-old Whyte faked the injury to avoid another loss.

WILL DILLIAN’S SHOULDER BE A PROBLEM?

If Whyte’s injury is valid, we could be entertaining into a period of postponements for the Fury fight.

With Whyte having shoulder problems, Fury might be better off going the Franchise route to avoid sacrificing all of 2022  dealing with Dillian’s injury.

Fury isn’t young enough to sacrifice a year of his career waiting for Whyte to be healthy enough to fight him eventually.

“Fury vs. Whyte, we have to look at when that will take place. It’s pretty obvious that it will,” said Eddie Hearn to iFL TV today. “It’ll be called by the WBC, yeah. “I don’t see it, no,” said Hearn when asked if Fury could be elevated to Franchise champion.

“It’s pretty much been called for already,” said Hearn about the World Boxing Council calling for Fury to defend against interim champion Whyte next.

“It’s been on the WBC’s website, and also their convention is coming up in two weeks, so I think you’ll see it then. The WBC will say, when a fight is called when a mandatory is called, you have 28 days for negotiations.

“If both parties don’t agree to terms, we’ll go to a purse bid.  Yeah, I don’t see why not?” said Hearn when asked if he believes he’ll be able to agree to terms for the Fury vs. Whyte negotiations. No, I’m not looking to be difficult,”  said Hearn.

Can Whyte be depended on to make it through training camp?

Fury’s promoter Bob Arum isn’t sure whether he’ll make the fight with Whyte next, as he mentioned Joe Joyce as a possible option. If the WBC attempts to take it out of Arum’s hands by ordering Fury to defend against Dillian next, Tyson may go the Franchise route.

NEGOTIATIONS WON’T BE A PROBLEM

“Dillian wants to get what he deserves for that [Fury] fight, but he also wants the fight,” said Hearn. “I don’t see why we can’t sit down with Bob Arum and make that fight.

“Again, massive fight, a stadium fight [Fury vs. Whyte]. When was the last time that Fury boxed in the UK? Five years ago? His [Fury] profile is bigger than it’s ever been, and Dillian is a big draw. It’s a stadium fight.

“Anything is possible, but the word that I’ve seen from the WBC and the work that’s going on behind the scenes with the legal teams, I don’t think so, no.

“I hope not,” said Hearn about the possibility of Fury being elevated to Franchise champion. “It’s [Whyte]  the best fight out there for Tyson Fury away from AJ and Usyk. Andre Ward never agrees with me, and Andre Ward thinks Tyson Fury should box once a year or retire. Why not stay active?

“Fury is on a great run. He probably wants to stay active himself, and he makes an absolute fortune for that fight [with Dillian]. He’ll believe he can win it, so why not be active?

“When you’re talking about creating a legacy and being a great heavyweight, you have to beat other people in the division other than one guy [Deontay Wilder] over the last three years.

“Right now, people think Fury is so good, and he is a brilliant heavyweight. Maybe he beats them all, so why wouldn’t you want to go through them all to create that kind of legacy? I think Fury vs. Whyte is a tremendous fight.

“Can you imagine if we got to a stage where we had Fury vs. Whyte and AJ against Usyk in the first half of next year, both in the UK? Imagine your numbers?” said Hearn.

Fury vs. Whyte would bring in big numbers on PPV and sell many tickets, but what good is it if the fight doesn’t take place until 2023 due to Dillian’s bad shoulder?

It’s too risky for Fury to agree to fight a guy that just pulled out of his last fight with Otto Wallin.

Can Fury and Arum count on Whyte making it through training camp without needing to postpone repeatedly?

Fury went through that torment when he attempted to fight David Haye many years ago. The last thing Fury needs now is to fight another fighter with injury problems. 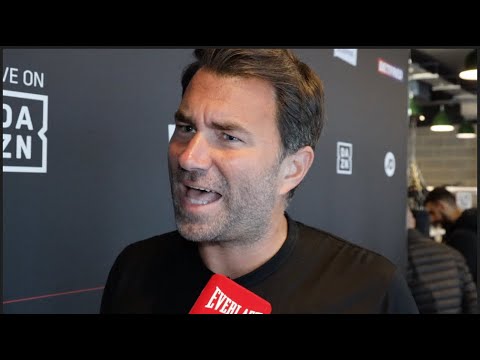 Anthony Joshua will be “ruthless” against Usyk – says Hearn »