By Dan Ambrose: David Benavidez says he plans on becoming the first guy to knockout Jose Uzcategui when the two square off on November 13th in their fight at the Footprint Center in Phoenix.

The Benavidez vs. Uzcategui fight winner will be the IBF & WBC 168-lb mandatory challenger to the winner of the November 6th undisputed clash between Canelo Alvarez and Caleb Plant.

Benavidez (24-0, 21 KOs) is hoping that he can get a title shot against the Canelo vs. Plant winner, but he’s not entirely sure that’ll happen. If Plant beats Canelo, those two will likely fight an immediate rematch.

Canelo said recently that he wants to move up to 175 after he faces Plant, so that’s what we’re probably going to see.

Uzcategui (31-4, 26 KOs) could be a tough fight for Benavidez if he chooses to slug with him as he did in his last contest against Ronald Ellis.

“I’m going to be the same fighter I always him, going in there looking for a knockout, ripping the body at a fast pace in an action-packed fight,” said David Benavidez during his press conference on Monday with Jose Uzcategui.

“This is my biggest fight to this day, and this is what the fans expect, so why would I go and change my style up. I feel like I want to make a statement.

“I’m going to go in there and do what I always do. I’m always looking for a spectacular win and spectacular knockout,” said Benavidez.

“I feel like this is the type of fighter I am, and this is the way I train as well. I put my heart and soul into a training camp, and I’ve been working extremely hard.

“Even if Canelo and Caleb Plant weren’t on the other side, my main objective is to go in there and give the fans the best possible fights available and give them a great stoppage.

“That’s been my whole plan this whole training camp. I know Uzcategui is a strong fighter, I know he’s a powerful fighter, but he’s never been stopped.

“He’s never been stopped for a reason. So my main objective is to go in there and stop him. It’s not going to be an easy task, but I feel like I’m the best super middleweight in the division right now,” Benavidez said.

It would be impressive if Benavidez stops Uzcategui, as like he says, he’s never been knocked out before.

But it won’t be a big deal otherwise for Benavidez to beat him because Caleb Plant already did it in 2019, and he dropped him twice.

In Uzcategui’s nest fight after his loss to Plant, he was beaten by Lionel Thompson and dropped in that fight in December 2019.

With those two defeats in his last five fights, it’s peculiar that Uzcategui is being given a chance to fight in an IBF/WBC title eliminator. Indeed, there are better fighters that are more deserving to fight for that position.

“I just want to show everybody that if he’s a brawler, I can brawl,” said Benavidez. “If he’s a boxer, I can box. So I  have everything it takes to become a champion again, and that’s my main objective to get back my titles.

“Whoever I got to go through, it doesn’t matter. I’m going in there trying to knock everybody out.

“Hopefully, after this fight,” said Benavidez when asked when we’ll see him as a world champion.

“First things first, we got to take care of business on November 13th. I’m very excited. Hopefully, it’s going to be sold out because I’ve got all my people there. It’s going to be a great performance.

“After when it’s all good, it’s going to be against Canelo or Caleb Plant. I feel like, after this fight, I’m going to be the champion again,” said Benavidez.

The excellent news for Benavidez is he will soon get a title shot against one of the four belts.

Unfortunately for Benavidez, it’s very likely the titles that he fights for will have been vacated by the winner of the November 6th fight between Canelo and Plant.

It’s not going to mean as much for Benavidez to fight for a vacant 168-lb title if he gets past Uzcategui, but it shows how much Canelo and Plant respect him. If they thought Benavidez was a soft touch, they would have fought him long ago.

“I don’t think he’ll [Canelo] go in a different direction,” said Benavidez when asked if he believes Canelo will choose not to fight him after his November 6th match against Caleb Plant.

“I feel like a lot of people are putting pressure [on him]. I feel like this fight right here for the WBC, and IBF title eliminator, the winner of this fight, has to fight Canelo definitely.

“It’s not only because it’s the fight that people want to see, but because we earned the right.

“This is my second title eliminator. My last one was with Ronald Ellis. If you fight two back-to-back title eliminators, I feel like they have to give you the opportunity, no matter what they want to do.

“I feel like if he [Canelo] does have different things he wants to do, the WBC after I win this fight, it’ll be a second title eliminator. They can’t skip me like that.

“Sometimes things happen, and there’s not much they can do. I’m going to be ready.

“My main objective is to win the fights, and that’s what it is. I don’t know,” said Benavidez when asked if he’s not sure if he’ll get a title shot if he wins the WBC title eliminator against Uzcategui.

“It’s the WBC and IBF title eliminator. So the winner of Canelo vs. Plant, they both have those belts.

‘So whoever is holding those belts, we have the right to fight. That’s why they have title eliminators. I worked hard for this fight; I know it’s going to be a great fight,” said Benavidez.

It sounds like Benavidez hasn’t been paying close attention to what Canelo has been saying in the media recently because he’s not talking about wanting to fight him next after Plant.

Canelo said he would like to fight Jermall Charlo or move up to 175 to take on champions Artur Beterbiev or Dmitry Bivol if he’s victorious against Plant.

When Canelo was asked if he would be interested in fighting Benavidez, he didn’t look enthusiastic when saying he’d welcome a fight with him. You could tell that Canelo has no intentions of fighting Benavidez anytime soon, if ever. 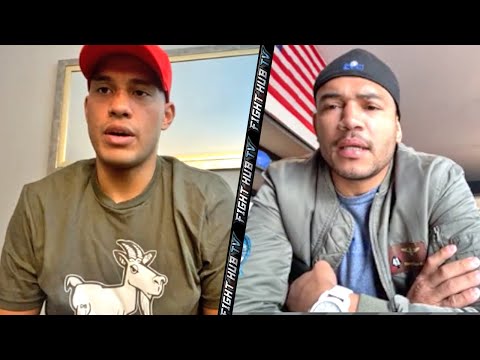