Brock Jarvis to fight on Teofimo vs. Kambosos card on Nov.27th

If Teofimo and Kambosos aren’t careful, Brock Jarvis could steal the show from them with his exciting fighting style. He’s a throwback to the era of Ray ‘Boom Boom’ Mancini in the 1980s.

The undefeated Australian Jarvis had a close call when he was unexpectedly hurt in the second round by the 25-year-old Frias in his first fight in the 135-lb division last Saturday night on the undercard of Mikey Garcia vs. Sandor Martin at the Chukchansi Park in Fresno, California.

Brock Jarvis almost fell out of the ring

Jarvis, 23, looked like he was ready to fall out of the ring when Frias had him on the verge of being knocked out in the second round. The referee showed a lot of patience in choosing not to step in and halt the fight.

Frias was pulled out quickly in the fifth round when Jarvis landed several hard shots after trapping him against the ropes. Frias looked in shock at the quick stoppage because he was upright, seemingly fine, and fighting back.

It was the right move by the referee, though, because Brock looked like a prime Ray ‘Boom Boom’ Mancini with the way he was unloading on Frias with nonstop punches in the fifth. Jarvis would indeed have taken him out in the round if the referee hadn’t stopped it when he did.

With the fast turnaround for Jarvis, it would be an excellent idea for his promoters to match him against a softer touch for his next fight on November 27th.

Jarvis should consider returning to the super featherweight division because power and style are more suited to that weight class than lightweight, where there are some real killers in that division.

“I knew it was going to be a hard fight, but I know that I’m better than that,” said Brock Jarvis to iFL TV in reacting to his performance against Frias. “I did things a bit sloppy, but that’s boxing. You make mistakes. You always strive to be perfect,  and I learned a lot from the fight.

“I did,” said Jarvis when asked if he thought he would get the stoppage of Frias. “I was in my corner, and [coach] Jeff [Fenech] was saying, ‘He’s getting tired, he’s almost finished.’ I’m ready to go ten rounds like that; that’s fine. And I was trying every round and working hard in there.

“I did feel like I was going to get there eventually, but I felt like I was winning the rounds regardless apart from one [round 2], but that’s boxing. You’re not going to win every fight easily, so you’re going to have some adversity. That’s just the way the game goes,” said Jarvis.

“I wanted to settle him down,” said Brock Jarvis’ trainer Jeff Fenech. “I didn’t want to jump up and down or scream or get overhyped.

“And I just wanted him to relax, breathe and throw some cold water on him, and let him know it’s about recovering. I know he’s super fit, and I know he’ll recover, and he’s got more in him.

“I just thought that when the referee did stop it, it was a hard stoppage. You can’t let that guy [Frias] take that for another round and a half, and then you can say what you want to say. If that was my son, I’m happy the referee stopped it,”  said Fenech about Frias taking punishment from Brock in the fifth at the time of the stoppage.

“We’re open for a rematch, no problem with that. I’ll let Brock fight him any day of the week. I don’t believe he can beat Brock.

Trainer Fenech says it was a good  lesson

“It was that he got lucky very early, and we did something that we shouldn’t have done.

“We weren’t as smart as we were supposed to be early, but that’s boxing. It was a great fight, and people loved it, and we won it. It’s a win, and we carry on from here.

“Let me tell you what happened,” said Fenech in talking about Brock’s preparation for the fight. “During sparring for this whole thing, we bashed this guy up; we beat up this guy, we walked through this guy.

“He [Jarvis] got out of training, and instead of setting it all up and making it happen collectively, he thought he would just do the same. It was just going to be a matter of time.

‘We’ll just get out there and start punching this guy, and I’m going to stop him.’ Well, guess what? The guy wants to punch you back.

“We’re both human, and we both can be hurt, and that was what we seen today. But like I said, it’s a great lesson for him [Jarvis].

Brock to stay in America to train

“I know that Brock will be much, much better from this, and I’ll be better for it as well because my instructions early will be even more severe. I’ll make sure that I let him know that he has to listen early.

“Just continue to learn and continue to get better,” said Fenech when asked what he wants to see from Jarvis moving forward.

“We’re over here in America, and we’re going to stay here for a little while and get some great sparring. We’ll take it from there, but for me, it was a hugely positive day.

“Yeah, we had a long camp, and we’re going to enjoy the victory,” said Brock.  “I’m just going to take it easy now and have a rest.”

The crowd at ringside were booing Jarvis and the referee immediately after the fight, letting them know their displeasure at the quick stoppage in the fifth. There was nothing that Brock could do about it. The referee made the call, and he wasn’t going to complain about it. 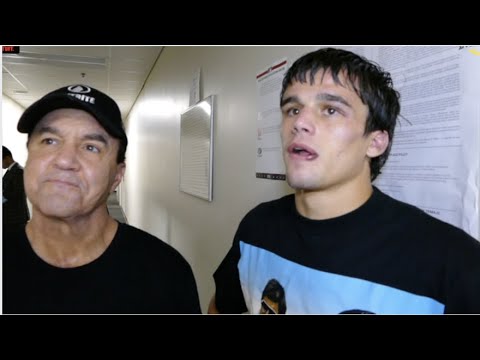 Schaefer Proud To See Probellum Representing Fighters All Over The World »