Bob Arum warns Dillian Whyte to “watch out” for Otto Wallin on Oct.30th

Hearn said on Tuesday that he thinks Whyte, 33, would do the same thing to Deontay Wilder as Fury did last Saturday night in stopping him in the 11th round.

Whyte (28-2, 19 KOs) is the mandatory to WBC heavyweight champion Tyson Fury. The World Boxing Council will likely attempt to force ‘The Gypsy King’ to face the winner of the Whyte vs. Wallin fight next.

Arum isn’t sure what Fury will do next, which could indicate that he’s not going to go along with the idea of Tyson defending against the Whyte-Wallin winner.

On Wednesday, the Top Rank promoter Arum didn’t sound enthusiastic about a fight between Whyte and Fury when he was brought up to him.

“If I were Eddie Hearn, I would tell Whyte to watch out for Wallin. Wallin is no Swedish pastry. Wallin is a hell of a fighter as he showed when he fought Tyson Fury,” said Bob Arum to iFL TV when told that Hearn said that Whyte would do the same to Wilder as Fury did in being too big and too strong.

“Remember, he’s [Wallin] the guy that bloodied Tyson’s eye, but that may be luck that he cut Tyson like that. But he took all of Tyson’s punishment without seeming to be affected by it. So, I’d favor Wallin if I bet on the fight; I’d favor Wallin over Whyte.

“If he [Whyte] gets knocked out by Wallin, how can he be the mandatory. He [Fury] already fought Wallin; give me a break. Luckily in [WBC president] Mauricio Sulaiman, we have a real boxing guy, who is very sensible,” said Arum.

If Wallin can stick around and drag Whyte into the championship rounds as Mariusz Wach did in 2019, he could stop him. Whyte gets tired late in his fights, and he’s vulnerable.

This fight arguably means more to Wallin than it does to Whyte because he’s not making PPV money the way Dillian is on Sky Sports Box Office.

Whyte can afford to lose to Wallin and continue to fight on PPV on Box Office. But Wallin isn’t in the same position, and he needs a win over Whyte to face Fury for his WBC title and make a ton of money from that match.

Fury won’t be made Franchise champion

“No, all Mauricio said to me is he’s a great admirer of Tyson Fury,” said Arum when asked if Fury will be elevated to WBC Franchise champion by the World Boxing Council. “Also, Mauricio showed me pictures.

“He’s apparently a friend of the pope. He’s going to arrange for Tyson and his wife, Paris, to have an audience with the pope. That’s essentially when I talked about it with Mauricio. That would be a great honor, and I know that Tyson would revel in that.

“I think Anthony Joshua couldn’t take a shot like that from Wilder and recover,” said Arum. “Usyk, we don’t know. We haven’t seen Usyk down yet. Until you see it, you can’t predict,” said Arum.

Don’t be surprised if Fury is soon made the WBC Franchise champion without any publicity.

If Fury asks the WBC to make him the Franchise champion, they’ll likely do it in a second, which would leave the Whyte vs. Wallin winner high & dry without the option to challenge Tyson for his belt.

I mean, the Whyte-Wallin winner would likely be elevated to the full WBC champion status outside of the ring, but that wouldn’t be the same as it would if they fought Fury and defeated him for the belt. 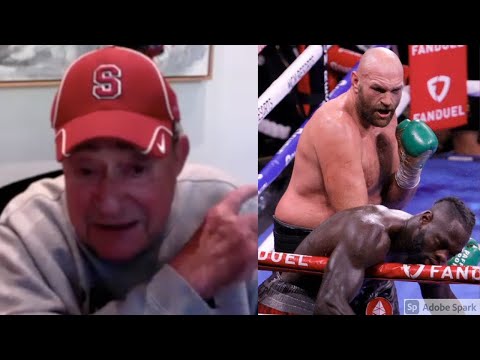 
« Deontay Wilder needs hand surgery, will fight in April or May