By Jeff Aronow: Eddie Hearn says he’s now targeting early 2022 for the trilogy fight between featherweight contender Mauricio Lara and Josh Warrington after their rematch on Saturday night ended in a second round technical at Headingley Stadium in Leeds, England. Lara (23-2-1, 16 KOs) was cut badly over his left eye in a deep laceration. The cut was from a clash of heads in round two.

Hearn reveals that the severity of Lara’s cut precludes him from returning to the ring in December to face Warrington (30-1-1, 7 KOs) in a trilogy this year. The two will likely fight in the first quarter of 2o22. 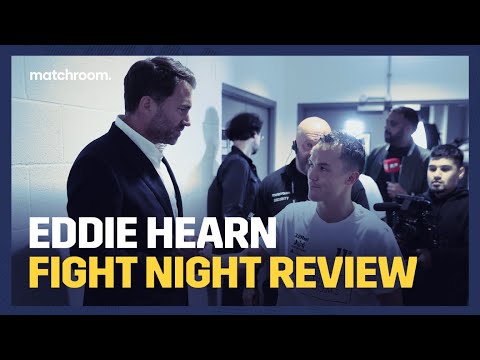 In the meantime, Hearn says he wants to get Warrington back in the ring for a fight before the end of the years. Hearn isn’t saying who he wants to match Warrington up with, but IBF super featherweight champion Kid Galahad is a possibility.

One downside of Warrington fighting Galahad or any top fighter at 126 is the possibility of him losing. If he gets beaten, it’s probably going to delay the trilogy match with Lara.

At the very least, the interest from boxing fans in seeing the trilogy match between Lara and Warrington will decrease if Josh loses his fight in November or December.

There are many people expressing doubt about Warrington meeting Lara for a trilogy match. In other words, they’re not buying what Hearn is saying about Josh fighting Lara in early 2022.

They think Warrington wants no part of a third fight with Lara because he was struggling from the power on his shots when the cut occurred from a head-butt initiated by the British fighter.

Warrington saw it as an easy fight

“I need to get the slate clean, and I need to get a W,” said Warrington when asked if he wants to fight Lara again.

“I thought I was [going to win], especially after I sat down after the first round and thought, ‘This is mine for the taking.’ I could even see myself having an early night, but not in this kind of a scenario.

“Weeks of weeks of promotion, and all these people come out. I’m just sorry. I can only apologize. I will have my redemption eventually. I wanted to say thank you [to the fans] by getting the win,” said Warrington.

Lara didn’t throw many punches in the first round, so it’s understandable why Warrington saw himself having an easy time. That was a feeling out round for Lara.

But in round two, Lara came out with a vengeance, nailing Warrington with big shots and backing him up. However, Warrington launched himself at Lara repeatedly in the round, hitting him with head-butts.

Lara wasn’t bothered by Warrington’s punches, which did little to slow down his forward movement. What did affect Lara was the head-butting from Warrington.

Hearn: Lara had one of the worst cuts

“I’ve never had that before,” said Eddie Hearn to iFL TV in reacting to the Lara vs. Warrington 2 fight ending in a technical draw

. “I’ve never had a main even fight end in a technical draw inside four rounds. I’ve sometimes seen that on other shows and thought, ‘It was a meh,’ and it was meh.

“Please, another two or three rounds because it was just warming up so good, but we move on. Josh is healthy, Lara is good. Like I said, one of the worst cuts I’ve seen,” said Hearn.

It was a bad cut because Warrington rammed his head into Lara’s left eye, causing the cut to occur. There were many head-butts from Warrington in both of the two rounds, but the cut didn’t occur until round two.

Eddie Hearn: Warrington would have won against Lara »