John Fury: Anthony Joshua is next for Tyson after Wilder

By William Lloyd: John Fury says Anthony Joshua will be next for Tyson Fury after dealing with his October 9th trilogy match against Deontay Wilder in Las Vegas. John doesn’t view Wilder (42-1-1, 41 KOs) as any threat to his son, Tyson.

With all the work that Fury’s trainer Sugarhill Stewart has done with him, Tyson will be well-prepared on the night to defeat Wilder for a second time.

However, John isn’t certain whether Joshua (24-1, 22 KOs) can get past his next opponent Oleksandr Usyk on September 25th because that’s a tough out for him.

Joshua is going overboard a little with him taking off a lot of weight in training camp for the Usyk fight, and he’s counting on using his trimmed-down physique to deal with the boxing ability of the Ukrainian fighter.

It could be a mistake for Joshua to have taken off so much weight. We’ll soon see on September 25th if Joshua made the right move with his weight reduction, but it could wind up being a failure on his part.

AJ comes next for Fury

“He said, ‘Dad, I’ve learned me with Sugar Hill than I’ve ever learned in my life,'” said John Fury to iFL TV in reflecting what Fury told him recently about his trainer.

“He’s happy with Sugar, and that’s good enough for me. If he don’t know where he’s come from. His uncle is Emanuel Stewart, the great Emanuel Stewart.

“They’re jelling well. Tyson likes him, and he likes Tyson. They got rid of all the crap in the fight camp. People that didn’t need to be there are gone.

“So yeah, Tyson is the happiest man in the world. He’s made adjustments in camp himself, and he knows what needs to be done. I’m more than happy about what’s gone on here.

“Tyson doesn’t fear anyone in the division, and he will prove it. Will get this bump in the road flattened out, and then we’ll be on to the next move.

“It’ll be AJ because there’s no other fighter out there. But AJ has his own problems with Usyk. He’s got to deal with him because that’s not forgone conclusion by any means.

“We will not let you down,” said John about Fury’s fight with Wilder on October 9th. “Tyson is going to win everything and defend everything. We’re on a new mission now,” said John.

Fury was talking about getting his mandatory defense out of the way against Dillian Whyte in December.

That’s an ambitious goal that Fury has to return to the ring so soon after his October 9th fight against Wilder, but if he doesn’t sustain any damage, why not?

The main problem that will keep Fury from fighting Whyte in December is that the fight’s promotion would be rushed. Instead of three to four months to market the Fury vs. Whyte fight, they would only have eight weeks.

John: Wilder won’t be a problem

“It won’t be a problem for Tyson because the camp is good, and everything is in order as it should be, nobody else,” said John on the Fury vs. Wilder 3 fight.

“I see it being a great night. I’m not worried at all. He’s in good hands with Sugarhill. Sugar knows what he’s doing. So, yeah, it’s probably one of the best camps he’s had.

“Yeah, he’ll bring a few different things to the job, Deontay Wilder. He has a new trainer, which is the case, but Tyson can deal with anything. He’s the best heavyweight by a country mile in this era. So I’m not worried at all. As long as he’s prepared right, and his mind is right, he’s unbeatable, Tyson.

“They’re going to need to be, aren’t they?” said John Fury when asked if he’s surprised at how confident Wilder is. “What’s the use of going into a WBC world title fight if you’re not confident.

“I don’t like Deontay Wilder. I’m not making any bones about that. He’s not a man in my book.

“He’s a sore loser. He’s a liar, and like I said before. If he’d done that to me and I was in charge, he’d been in the court of law.

“But that’s another matter. He’s there so Tyson can beat him up on the 9th of October and beat him up real good,” said John Fury.

Interestingly, John doesn’t understand why Wilder is bitter about what happened the last time they fought.

Either John hasn’t watched the replay of the second fight between Wilder and Fury, or he’s on board with the fouling Tyson used.

With the way Fury roughed up Wilder, he has a reason to be unhappy about it still.

Let’s see what Deontay has got

“He probably is,” said Fury when told that Tyson said that Deontay is the second-best heavyweight in the division.” Listen, I’m not knocking the man’s fighting ability.

“He behaved like a big girl. He embarrassed himself. What can I say about him. You got to be honorable in defeat. If a man defeats you fair and square, shake his hand and say, ‘I’ll get you next time, mate.’

“Go back to the gym, start again, see what you did wrong, and see if you can make adjustments on that for the better.

“But not crying up and down and making excuses, this that and the other. You know what? There’s a lot of bizarre people around him. On the 9th of October, let’s see what he’s got,” said John Fury.

Sugarhill Stewart is a good trainer, but he’s not going to be able to stand in there and take the blows for Fury.

Last time, Sugarhill came up with the aggressive roughhousing strategy that Fury used to pressure Wilder and wear him out.

If that’s all Sugarhill has up his sleeves from his many years of training at the Kronk Gym in Detroit, it might not be enough.

John’s supreme confidence in his son Tyson could evaporate on October 9th if Wilder can land one of his big power shots. 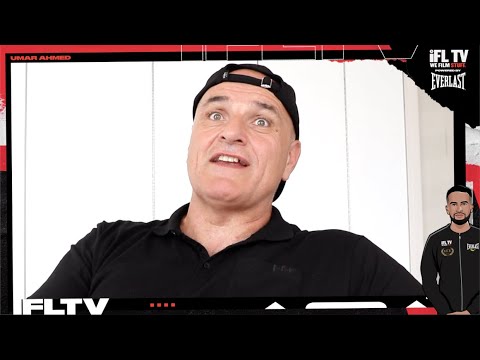 
« Announced: Mikey Garcia vs. Sandor Martin on Oct.16th to headline on Dazn

Why Hasn’t Vitali “Dr. Ironfist” Klitschko Gotten His Due Greatness? »