By Charles Brun: Promoter Eddie Hearn says he’s four former world champions that he’s considering as options for welterweight contender Conor Benn’s next fight should he get through his clash this Saturday night against journeyman Adrian Granados (21-8-3, 15 KOs) at the Headingley Rugby League Stadium, in Leeds (live on DAZN).

The leading candidate for Benn’s next fight is 34-year-old Amir Khan, who hasn’t fought in two years and hasn’t beaten a top 15 contender since 2014.

Hearn views Khan as a great option for the 24-year-old unbeaten Benn (18-0, 12 KOs), but unfortunately, that’s not likely to happen. Khan has expressed zero interest in being a stepping stone for Benn to rip to shreds to help make him look better than he actually is.

If Hearn isn’t able to entice Khan into taking the fight with Benn, he’s interested in matching Conor against these shopworn ex-world champions:

Neither guy looked good, though, and many boxing fans viewed the fight as an old-timers match.

As far as the former four-division world champion ‘The Problem’ Broner goes, he might be open to fighting Benn, but it would require that Hearn give him a huge payday.

It probably wouldn’t be worth it for Hearn to pay Broner the type of money he’d be asking for to be the opponent for Benn.

Benn’s options for the next fight

“A tough job. It’s a proper fight against Adrian Granados,” said Eddie Hearn to iFL TV on Benn’s fight this Saturday against journeyman Granados. “You know what? Granados really fancies it as well.

“This is the perfect fight,” Hearn said of Benn facing journeyman Granados, who has a 1-2-1 record in his last 4 fights. “Once you come through that, I want the Amir Khan fight [for Conor Benn].

“That is the fight for British boxing, and if Conor can put in the kind of performance in that I think he can on Saturday, people will really start calling for that fight [Khan vs. Benn].

“There are other names [for Benn]. There’s [Robert] Guerrero, there’s [Victor] Ortiz. Victor Ortiz, not Vergil, and there’s Broner. I love the Broner fight, but that’s all to come. There’s so much to come for Conor Benn, but we’ve just got to take care of Saturday first,” said Hearn.

These fighters are totally over-the-hill at this stage in their sagging careers, and the only thing Benn can gain from fighting them are big paydays.

That likely is the only reason Hearn wants to match Benn against those faded older ex-world champions.

Also, Benn will get more attention focused on him fighting Khan, Ortiz, Broner, or Guerrero than he would against another journey or lower-level fringe contender.

Not surprisingly, Hearn didn’t mention Kell Brook as one of the guys he’d like for Benn to fight, and you can understand why. Brook can still fight a little, and he’s got the power to ruin Benn and Hearn’s dreams of making money.

Brook would be a VERY dangerous opponent for a fighter with a reckless fighting style like Benn. The main thing Benn has going for him is his last name, which is connected to his famous dad, Nigel Benn.

Thus far, Hearn has been careful not to mess things up for Benn by matching him against a dangerous fighter like David Avanesyan, Vergil Ortiz Jr., or Jaron Ennis.

Benn is making good money fighting fodder opposition in the UK, which will likely continue for the next three to four years, perhaps longer.

Eddie has got to know what he has in Benn, a fighter that is the equivalent of ‘Old Spindletop’ oil well in Texas, bringing in massive money.

For all intents and purposes, Hearn is sitting on top of a huge oil well with Benn, making money passively without putting him in risky fights.

Hence, you see Benn facing the fodder opponent Adrian Granados on Saturday instead of a quality contender. Eddie isn’t going to mess up the gravy train money flow for Benn by putting him in with a live body and watching him get obliterated.

Hearn predicting a war on Saturday

“All this talk about Broner and Khan and all this kind of stuff; just get the job done on Saturday,” said Hearn of Benn. “This is going to be a good fight for him.

“This is the kind of fight that we need Conor Benn to come through when we’re talking about all those other names. So let’s just handle business on Saturday. Conor is a consummate professional.

“I feel like he’s [Granados] is more confident now than he was the first time he come,” said Hearn in alluding to the original July 31st date for the Benn-Granados fight, which was postponed after Conor’s positive test for COVID-19.

“Conor Benn is improving all the time. He’s getting better and better. He’s vicious, he’s spiteful, he’s fast, and he’s in unbelievable shape. I think it’s going to be a war, I really do. Conor has just got to stay switched on,” said Hearn.

Granados, 32, is always good for a nice little war, but he’s older now and not a true welterweight. His best weight was at 140, and he’s like a fish out of water at 147.

Although Benn hasn’t proven himself to be a high-level fighter at 147, he’s got some power, and he likes to unload with flurries on his opponents.

With Saturday’s fight taking place in the UK, there’s a good chance we could see another quick stoppage if Benn unloads with a storm of punches on Granados.

It would be a good idea for Granados to be cognizant about the possibility of Benn trying to get a premature stoppage, like in his last fight against Samuel Vargas.

So if Benn throws a flurry of wild shots, Granados will need to make sure he throws something back in between if he doesn’t want the referee to jump in to stop the contest quickly.

“I’m really proud of him as well because that was a real kick in the nuts when he tested positive for COVID,” Hearn continued about Benn. “He regrouped, and we didn’t rush back. He had his little days and weeks to recover.

“He comes back to the gym, we tested him, and he’s still firing on all cylinders. He just finished camp, and he’s good to go on Saturday.

“I think his[Benn] match-making has been brilliant. [Sebastian] Formella, [Samuel] Vargas, and Granados. It’s a great run of events for someone at that stage of his career.

“We could all get carried away; we could all start talking about all these fights. We’re going to do it right with Conor Benn.

“This young man has a very high ceiling, both commercially, both financially, both in terms of legacy and achievements in the sport. To do that, you’ve got to guide a fighter properly,” said Hearn of Benn.

You hate to say it, but the only way that Benn will be able to reach his commercial and financial ceiling is by Hearn continuing to match him the way he’s been doing carefully.

Right now, Benn, 24, is making big bank fighting lower-level opposition at 147, fighting washed-up guys or fringe contenders that lack the talent to give him problems.

Hearn must keep him away from these fighters:

These guys have too much talent, experience, and the overall ability for Benn to be facing.

To keep the gravy train rolling with Benn in terms of the dough Benn is bringing in, Hearn has got to keep matching him the way he’s been.

If Hearn makes the mistake of throwing Benn into the deep end of the pool at welterweight, it could be awful. We’d likely see Benn get pounded as he did in his fight against little-known Cedrick Peynaud four years ago.

Benn was dropped twice by Peynaud and shockingly wound up winning a highly controversial six round decision. 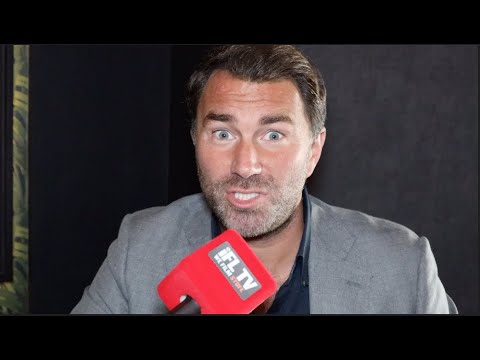 Dillian Whyte vs. Chris Arreola being finalized for Oct.30th »