By Scott Gilfoid: Eddie Hearn unleashed his dogs of war on Tyson Fury on Wednesday, saying that he’s “struggling” to peddle his October 9th trilogy fight with Deontay Wilder with him trashing him during interviews.

In an interview on Tuesday with the Overlap, Fury called Hearn a “Wa***er” and said he’s just a “Businessman” that wants to be a fighter.

It was a weird interview because Fury was more focused on Hearn and Anthony Joshua than his next opponent Deontay.

On top of that, earlier on Wednesday, Fury was squawking about wanting to fight Dillian Whyte in December and Joshua twice in 2022. Again, nothing about his opponent Wilder (42-1-1, 41 KOs), who he’s choosing not even to mention.

It appears to Gilfoid that Fury is using a sneaky method to build up interest in his fight with Deontay by getting boxing fans excited about seeing him fight Joshua and Whyte.

So by blabbering 24/7 about wanting to fight those guys, Fury uses a backdoor method to create interest in his trilogy match with Deontay on October 9th. It’s a smart move by Fury, but so despicable.

Hearn: Fury is struggling to sell his fight

“You’ll probably see a lot more of that in the next couple of weeks in the build-up to his fight. I don’t know why he said, ‘Eddie Hearn isn’t a champion.’

“Obviously, I’m not a champion. I’m a promoter. He said, ‘Eddie Hearn is just a businessman.’ Correct. Congratulations. I’ll tell you one thing me and Tyson Fury have in common. We both have the same amount of heavyweight world title championship defenses, which is absolutely zero,” said Hearn.

Fury is utterly overconfident that he’s even considering Wilder as having even a slight chance. This is a perfect example of a fighter that is drunk on his own power.

Fury’s delusional fantasies of how the rematch with Wilder will play out has gone completely to his head, giving him this grandiose sense of how worth it. I hate to say it, but I see Fury heading towards his own Waterloo on October 9th, and it’s too late for him to turn back.

“He doesn’t want to fight AJ anymore?” said Hearn when told that Fury said on Wednesday that he wants to fight Dillian Whyte in December after beating Wilder on October 9th.

“I don’t know. You never know what to believe with Tyson Fury, but good luck to him,” said Hearn.

Fury is thinking he’s going to make easy work of Wilder on October 9th, and then he’ll be able to swoop back for a title defense against Whyte in December in a stadium fight in the UK. Fury is totally disengaged from reality, and it’s going to be bad for him when Deontay starts unloading. 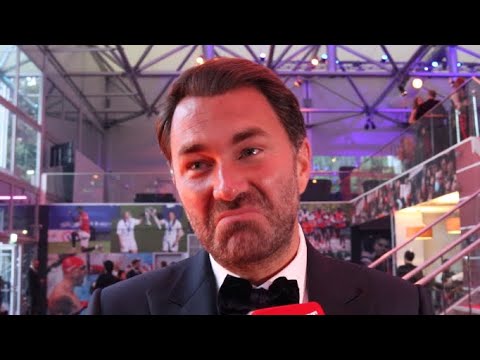 Announced: Mikey Garcia vs. Sandor Martin on Oct.16th to headline on Dazn »