By Charles Brun: Promoter Eddie Hearn sounded off on Friday on the Oscar Valdez ruling, Conor Benn vs. Adrian Granados, and the Mauricio Lara vs. Josh Warrington 2 fights this Saturday.

Hearn’s show this Saturday night at the Headingley Rugby League Stadium, Leeds, sees former IBF featherweight champion Warrington (30-1, 7 KOs) trying to save his career when he takes on the 23-year-old Lara (23-2, 16 KOs) in a rematch.

In the co-feature, welterweight contender/prospect Conor Benn (18-0, 12 KOs) will be facing Adrian Granados (21-3-1, 15 KOs), a second-tier journey, who has mixed it with many top fighters during the course of his 13-year pro career.

Hearn hopes that Benn can deal with Granados in a better fashion than fighters like Adrien Broner, Danny Garcia, Shawn Porter, and Javier Fortuna did.

But like in Benn’s last fight against the well-seasoned journeyman Samuel Vargas, he fought a guy that had a ton of mileage on him and wasn’t the same fighter he’d been years earlier.

The same applies to Granados. He’s not the same guy that Porter, Danny, Fortuna, and Robert Easter Jr. fought years ago. As such, Benn won’t be able to get the credit that he would if he’d taken on Granados when he was younger and still fighting at a high level.

The reality is, Granados’ record in his last fought fights is 1-2-1, and his only win was against Arturo Herrera Cario (9-33-1).

Granados’ other wins in the last five years since 2016 were against these no-names:

Warrington was massacred in nine rounds last February when he fought Lara in London at the Wembley Arena in what he thought was going to be a stay busy fight.

Warrington found out that he was in over his head against the bigger, stronger, and much younger Lara. The fight was like watching a young George Foreman batter Joe Frazier.

I mean, it was a mismatch from the word go, and Warrington never stood a chance.

Hearn says that it’s not going to work for Warrington to change his fighting style 100% to do what Anthony Joshua did in his rematch with Andy Ruiz Jr. by choosing to box instead of slug.

Firstly, that won’t work because Lara didn’t pig out and eat his way to obesity the way Ruiz Jr. did before his rematch with Joshua.

Additionally, Lara was still dominating Warrington even when the Leeds native tried to box from the outside. Lara had the reach and was bouncing huge power shots off his grill at a distance.

“Yeah, I don’t think he can fight like that,” said Eddie Hearn to Boxing Social when asked if Josh Warrington will follow the Anthony Joshua blueprint that he used for his rematch with Andy Ruiz Jr. by boxing when he faces Lara on Saturday night.

“Josh’s strengths are throwing combinations and work rate, so you don’t just want to become a target in this game in getting walked down by Mauricio Lara.

Tomorrow night… They do it again!

“So, yes, I do see him [Warrington] fighting a little bit like Joshua in the Ruiz fight to a game plan, but he has to do the things that made him the best featherweight in the world, which is combinations, work rate, and outwork his opponent.

“When you try to outwork an opponent, you put yourself in the firing line to engage. Work Mauricio Lara’s body, move in and out, stop trading up.

“But it’s going to be one of those fights where you watch through your fingers because every single exchange, you know, is dangerous but ultimately leads to a great fight to watch,” said Hearn.

I have a bad feeling about this fight for Warrington because he’s not cut out to be a boxer, and he’s going to have to box if he wants to have a shot at beating Lara.

The last time they fought in February, Lara only had two weeks to prepare for the contest. This time he’s got a whole camp, and he’s going to be more than ready to defeat Warrington a second time.

Hopefully, Hearn has already thought out what he wants to do with Warrington if he loses again.

He can keep Warrington around and continue to sell his fights in Leeds, but he needs to start matching him the way he does with Benn by putting him in with non-punchers because he doesn’t have the right fighting style to compete with those guys.

Hearn expects Benn vs. Granados to be competitive

“I want him to fight Amir Khan,” said Hearn about his hopes for Conor Benn’s next fight should he defeat Adrian Granados on Saturday. “I know Amir is looking at one more fight before he hangs them up.

“This [Granados] is the type of fight that will tell us where he’s [Conor Benn] is at. [Samuel] Vargas was a good example of that, but this is a step up from Vargas.

“This is not just hype. We’re just saying he’s Nigel Benn’s son. This guy [Conor] is a world-class welterweight and he’s a huge draw, and he’s so exciting to watch.

“I’m looking forward to it and it’s a proper fight for Conor Benn on Saturday,” said Hearn.

Granados has looked dreadful in his last four fights, and it doesn’t seem realistic for him to be competitive with the younger, faster, stronger, and bigger Conor Benn.

If this fight does turn out to be competitive, it would be a bad sign for Benn’s career because Granados would be food for young talents like Vergil Ortiz Jr. and Jaron Ennis.

“I haven’t seen the news or the WBC ruling on it. I’ll have a look and catch up to you tomorrow and give you my opinion,” said Hearn on the Commission in Arizona ruling that Oscar Valdez can still go ahead with the fight against Robson Conceicao on September 10th.

“In all these situations, there are so many things you hear and don’t hear,” Hearn continued on the Valdez vs. Conceicao fight, being allowed to continue despite Oscar testing positive for phentermine.

“It doesn’t sound good, but I don’t know anything about the ruling or the investigation or anything. We’ll have a look and I’m sure there will be plenty of people talking about it over the next 24 hours.

“In a lot of those situations, it depends on what the Commission acknowledges. Do you remember the Billy Joe Saunders situation. It was an argument with UKAD that was fine, but in the VADA test, it wasn’t.

“It’s so confusing. I think there needs to be a universal situation where governing bodies or commissions just acknowledge one list because you’ve got a situation there where a fighter might think a substance is fine, but it’s not on that list.

“Well, it was on that list, and that’s confusing. Whether a fighter is guilty or not guilty, that gives them the opportunity to say, ‘This is the list that I got and it’s not on that list.’

“It’s a mess, as it always is. I think the only way, and I don’t believe in that fight [Valdez vs. Conceicao]. I believe that was a random test from the WBC.

“AJ, Dillian Whyte, all of these fights, even Warrington vs. Lara. Lara was tested three times by VADA during camp. Not a random one by the WBC. We pay for that.

“It’s about twenty-five thousand dollars per fight, and this is the problem, the cost.

“It’s impossible too, but for the main event with so much on the line for those kinds of fights, we have to be invested in testing.

“The problem with VADA is, they can’t sanction. So they report, and then you’re left with someone else to sanction. So, someone can be completely cheating, but if someone else says, ‘That’s okay,’ they’re fighting.

“By the way, VADA, Margaret Goodman, I think they do a good job. Still, if the Commissions, testing companies, and the results don’t align into a conformed decision, you’re always going to get bad decisions or controversial decisions.

“There also needs to be a situation where the governing bodies get together and say, ‘If you test positive for a substance, these are the sanctions, and these are the process.’

“At the moment, it’s case by case, and to be honest with you, there are many people who test positive in all sports who are not cheating.

“But there are also many people who do test positive who are cheating. So, it’s very, very tricky.

“Without knowing anything about the Valdez situation, I didn’t know that substance wasn’t on the ban list of WADA. So that brings in another complication. I’m sure it’ll roll on and on,” said Hearn.

With WADA ruling that phentermine can be used by boxers outside of competition, there’s not much that can be done about Oscar Valdez to penalize him for his positive test.

WADA allows the use of the banned substance up to a day before a fight, which is shocking. VADA doesn’t allow phentermine to be used during training camp, and there’s where the problem is.

According to ESPN, Valdez reportedly signed up to have VADA testing for the fight with Conceicao, yet he’s choosing to go with WADA to be allowed to fight after his positive test. 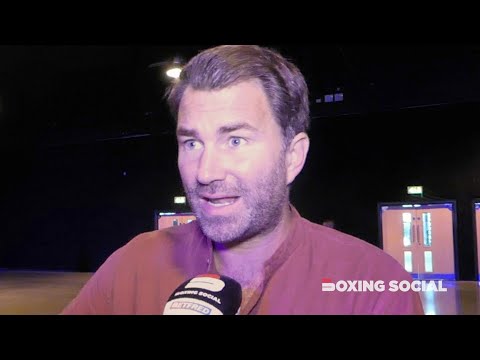