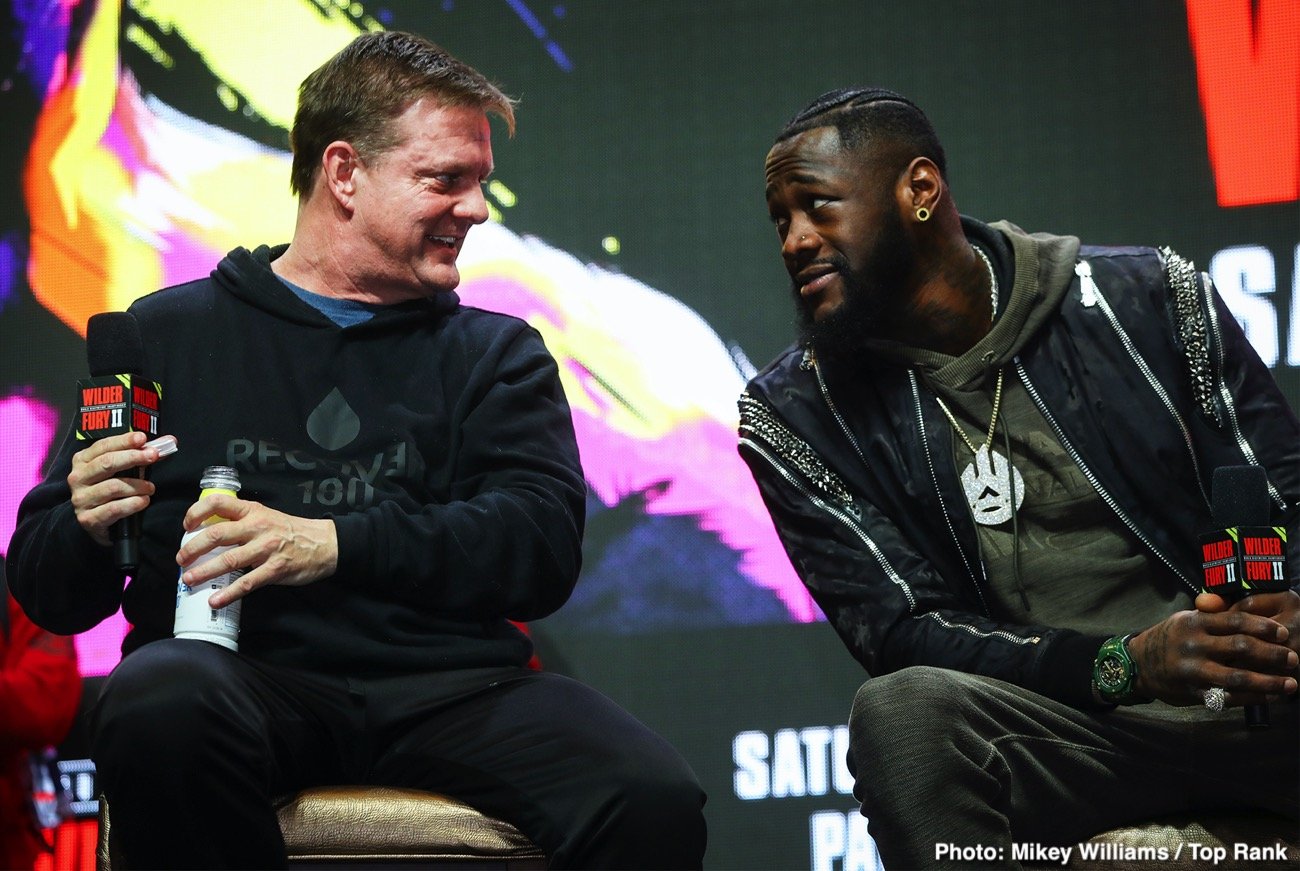 By Max Schramm: Tyson Fury is building up the status of Deontay Wilder by complimenting him ahead of their trilogy fight on October 9th at the T-Mobile Arena in Las Vegas. Fury is arguably doing a better job of rebuilding Wilder than his own promoters at this point.

In what appears to be a strategic move to create interest in the third contest and ensure that he’s given plenty of praise afterward, Fury is spending time boosting the status Wilder (42-1-1, 41 KOs).

This is a self-serving move for Fury, and he’s likely been told to do this to rebuild Wilder in the boxing public’s mind. Fury must make Wilder look invincible again because many fans have given up on him, seeing him as having no chance of winning.

The reason why Fury needs to rebuild Wilder is that it’s affecting his bottom line.

Unless fans believe Wilder has a shot at winning, they won’t purchase the fight with Fury on FOX Sports PPV on October 9th. In turn, that’ll hurt Fury in the pocketbook because he’ll make less money off the fight.

“Deontay Wilder is a good fighter. He’s one of the best of our era,” said Fury to Frank Warren’s Queensberry Promotions. “So many fights, so many wins, and so many great nights of entertainment.

“Just because he loses to me doesn’t define him as a fighter. I’ve tried to say that before in another interview.

“Losing fights doesn’t define us as fighters. It’s what we do from there, how we come back, and how we go over, and how we welcome back in life.

“Muhammad Ali had five losses, and Mike Tyson had the same. A lot of great fighters lose fights, but it doesn’t define their careers.

“Then you’ve got some fighters that are undefeated and don’t fight anybody. That’s not as good. They don’t get remembered as one,” said Fury.

It’s hard to believe that Fury really means what he says because he’s so transparent in his overall goal. This isn’t about Fury rebuilding Wilder because he likes him personally.

It’s about making the boxing fans believe Wilder has a chance, which they currently don’t.

Tyson certain of victory over Deontay

Wilder will lose again. I’ve already foreseen, and I’ve already said it. There’s no way Wilder can beat me,” said Fury. “It’s not a thing. He couldn’t beat me after all the years I was out of the ring and all the weight loss and everything.

“When I had a proper training camp for the second one, he got obliterated, and the third time, I’m expecting more of the same.

“To be fair, that doesn’t mean to say he can’t everybody else in the division with one hand tied behind his back because I do believe he’s the most dangerous, even including myself.

“He’s more dangerous than I’ll ever know how to be. Deontay Wilder is the most dangerous fighter on this planet.

“All weights, it doesn’t matter. Deontay Wilder is the most dangerous man of them all,” said Fury.

In terms of power and hand speed, Wilder is the most dangerous heavyweight in the division right now.

Fury is on the level by talking about Wilder being the most dangerous fighter on the planet, but it’s hard to take him at face value because he’s clearly got an ulterior motive with his compliments.

We’ve already seen that Wilder can beat Fury from their first fight when he knocked him unconscious in the 12th round. The fight could have been stopped at that point, and no one would have complained about it.