By William Lloyd: Undisputed light welterweight champion Josh Taylor had his fight with WBO mandatory Jack Catterall announced on Wednesday for December 18th at the SSE Hydro in Glasgow, Scotland.

Although Taylor (18-0, 13 KOs) freely admits that it’s not a big fight, he feels that he owes it to Catterall (26-0, 13 KOs) because he stepped aside last May so that Josh could face WBC/WBO 140-lb champion Jose Ramirez in an undisputed clash in Las Vegas.

All four of Taylor’s titles will be at stake when he faces the 28-year-old Catterall on December 18th in Glasgow. It should be an interesting fight for as long as it lasts.

On paper, it’s a mismatch because Catterall hasn’t faced anyone at world-class during his nine-year professional career. The only notable name on Catterall’s 26-fight resume is Ohara Davies, who he defeated by a narrow 12 round unanimous decision three years ago in October 2018.

Davies is more of a domestic-level fighter rather than a top-tier 140-pounder, so basically, Catterall has yet to cut his teeth against a world-class-level fighter during his career.

Obviously, the World Boxing Organization has their reasons for why they chose to rank Catterall at #1, but they clearly didn’t put him at that spot due to his resume because he’s fought no one.

Interestingly, Catterall is ranked by the WBO above many fighters that would easily beat him.

You can argue these contenders deserve to be ranked above Catterall in the WBO’s top 15 rankings at 140:

“I’m looking forward to getting back home. It’s kind of a Scotland vs. England type of match,” said Josh Taylor about his December 18th fight against Jack Catterall in Glasgow.

“So I’m buzzing being on a platform that I deserve on Sky, having Sky on the back of me raising my profile. I’m going to be involved in massive fights after I get through Jack Catterall.

“I’m on the precipice of huge legacy fights and I’ve got Sky backing me to become a huge star. Now I’m getting the backing so people can see my fights, so I’m absolutely buzzing.

“It’s a massive fight, all the belts are going to be on the line,” said Josh Taylor about his December 18th fight against Catterall.

“Jack Catterall did a good thing for me, stepping aside and letting me fight Jose Ramirez first and let that fight happen. Obviously, there was some method behind his madness.

“He stepped aside knowing that whoever the winner was, he’s going to get a shot at all the belts rather than getting a shot against Ramirez for the WBO.

“He’s getting a shot at all the belts, and I think he knew that was the best move for him. Having said that, he agreed to step aside and let me have my fight. So I’m like to honor my word, which I am, and giving him his chance to have a go.

“It’s going to be a great fight. We knew this would be the next fight, so we’ve already started breaking him down, and I’ve got a good idea.

“I’ve watched Jack coming through the ranks as well and I knew I would have a potential fight soon. I’ve always known that I have the beating of him, and obviously, I have to prove it on the 18th of December.

“But I have absolutely no doubt that I can win that fight. The things that I see in his game that I can exploit as well.

“Having said that, he’s a very, very good fighter. He’s 26-0, and he’s beaten everyone they’ve put in front of him. He is a very skillful fighter, he’s very clever,” said Taylor about his fight with Catterall.

Taylor vs. Catterall will play out well in the UK, but not elsewhere. That’s the negative. Catterall isn’t well known outside of the UK and not rated highly by the boxing fans worldwide that have seen him fight.

It would have been interesting to have been a fly on the wall when the WBO met to rank Catterall at #1. He’s a basic light hitter with a weak resume. Again, the WBO gave Catterall a ranking that he clearly doesn’t deserve.

At best, Catterall should be ranked at the #15 spot, but he seems out of place even right there. Catterall is more of a second-tier type of fighter, not a top 15 level guy.

“Listen, I’m not going to go looking for a stoppage, but if it comes it comes,” said Taylor when asked if he’s going to try and knockout Catterall on December 18th.

“But I just believe 100% I’m going to win this fight. I believe I’m on a good roll at the minute.

“I’ve got good momentum and good form, so I believe it’s going to take a really special fighter to beat me at the minute. Either that or if I have an off night, a really off night, but I can’t see it happening.

“I’ve been back in the gym for a couple of weeks, ticking over and getting myself back in shape.

“I’ve been celebrating and taking time off with the media stuff as well. I’ve been keeping myself in decent shape, but now that the fight has come around, and I know what’s happening, the mentality is changing. It’s straight back in the gym.

“I want to go up there to 147 to challenge for a couple of big fights, and then come back down and defend my belts and then maybe fluctuate between the two weights.

“I can make the weight at 140. There are big fights at 140 and big fights at 147. So in and around the two divisions, there are massive fights. They soon will,” said Taylor when told that nobody knows him at 147.

It’s easy for Taylor to say that he will float between the 140 and 147-lb weight classes, but it may prove more difficult than he thinks.

Unless Taylor is a modern-day Henry Armstrong, he’s going to have problems returning to the 140-lb division once he goes up to 147.

Moreover, Taylor may not enjoy the same success at 147 that he did at 140. He barely beat Jose Ramirez, which showed his limited ceiling.

“I think it was a little bit tongue in cheek,” said Taylor in reacting to a comment from Manny Pacquiao’s trainer Freddie Roach, who said, “Who is Josh Taylor?” when asked if he’d be interested in seeing Pacquiao fight Taylor next.

“So he just replied to a question that was completely off the topic. I didn’t get anything from that. I’m not offended. It takes a lot to offend me.

“You need to try harder than that to offend my feelings. I think he’ll [Pacquiao] fight again. I’d like to see him hang it up because he seemed like he was a little off the pace.

“He’s still a very, very dangerous fighter and one of the best and still at the top of the game kind of, but he just looked a little off the pace, and a little bit old, which was, for me was really hard to see.

“The Manny Pacquiao from a couple of years ago would have taken care of Ugas no problems,” Taylor said.

Manny Pacquiao’s trainer Freddie Roach seemed annoyed by the question about whether Manny would fight Taylor next or soon. Hence, Roach’s response to the interview question by saying, “Who is Josh Taylor?” Roach was basically letting the interviewer know that he was straying off-topic.

“I think it’s a great fight. I think Porter gives everybody a tough night no matter who you are with his all-out aggressive fighting style,” said Taylor in reacting to the Terence Crawford vs. Shawn Porter fight that will be taking place later this year.

“I think he [Crawford] can weather the storm with Porter and quite easily outbox him. That’s what I took from my sparring sessions with him [Porter] in Las Vegas.

“Yeah, I’d love to fight any of these guys and I fancy my chances against every single one of them.

If Taylor is going to challenge the winner of the Terence Crawford vs. Shawn Porter fight, he’s going to need a lot of luck for him to have a shot at winning. Crawford is still in his prime, and Porter has a difficult style.

Taylor would have an excellent chance of beating Porter, who looks like he’s on the downside of his career following his fights with Errol Spence Jr., Yordenis Ugas, and Sebastian Formell. 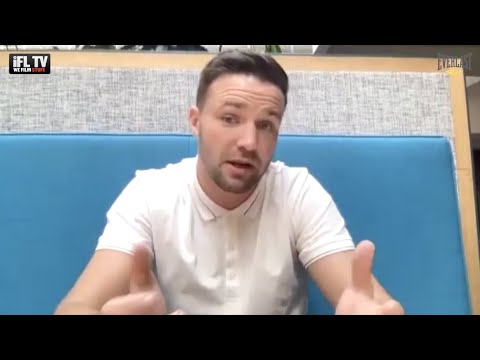