By Matt Lieberman:  Andy Ruiz Jr will be returning to the ring before the end of the year to face Luis Ortiz or Charles Martin. According to ESPN, those are the two potential opponents that are being considered for the former IBF/WBA/WBO heavyweight champion Ruiz (32-2, 22 KOs) to fight next.

Ruiz looked decent in coming off a long year and a half layoff last May to defeat Chris Arreola by a 12 round unanimous decision on FOX Sports PPV in Carson, California.

Is Ruiz taking too much weight off?

The dramatic 57-lb weight loss for Ruiz, 32, may have continued to him being knocked down in the second round by the former three-title world title challenger Arreola in that fight. Ruiz Jr got back up and fought for the remaining ten rounds to win a wide 12 round unanimous.

Ruiz has seemingly lost even more weight since his fight with the 40-year-old  Arreola. In recent videos and photos of Ruiz, he appears to be in the 240s, heading towards the 230s. It could be a terrible mistake for Ruiz Jr. to be changing his body weight at this stage in his career.

He’s found success as a heavy fighter, and he could be barking up the wrong tree in losing so much overnight. Some believe that Ruiz’s punch resistance has decreased due to all the weight he’s taken off.

From watching Ruiz’s fight with Arreola, we already know that his power isn’t the same as it was before in fights against Anthony Joshua. Like many people who go on crash diets, they’re weaker after having lost the weight.

Ranked #2 WBC, Ruiz Jr. hopes to fight for a world title soon against whoever wins the championships in 2022 after the smoke clears from the fights involving Tyson Fury, Deontay Wilder, Anthony Joshua, and Oleksandr Usyk. 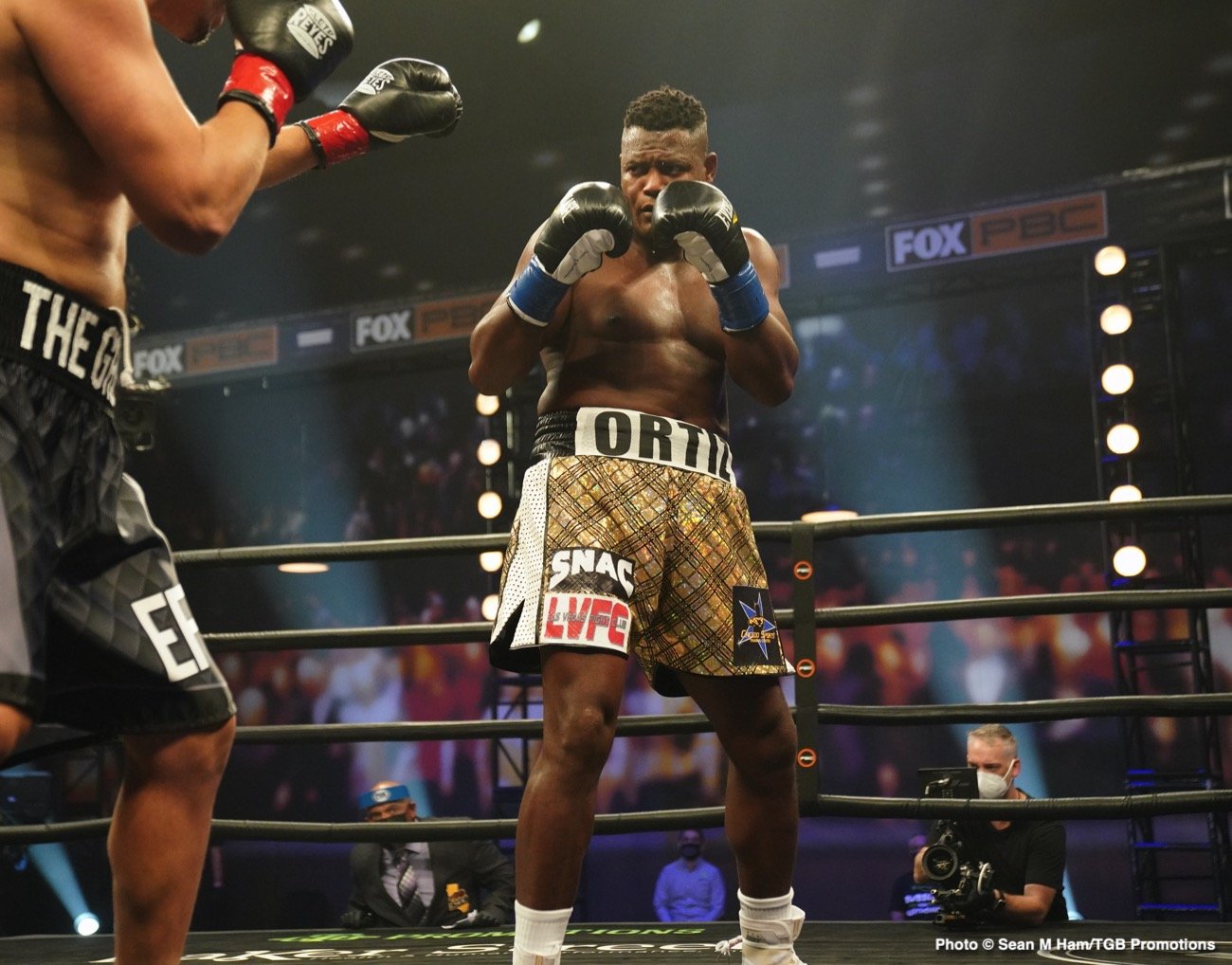 If Ruiz Jr. wants to impress fans, he’ll take on the talented 42-year-old Cuban Luis Ortiz (32-2, 27 KOs) next. Ortiz is fighting at a high level despite his age, and he would give Ruiz a perfect test.

There’s a chance that Ortiz could beat Andy if he fights the way he did against Arreola because he doesn’t look like he can take a solid punch any longer.

If Ruiz wants to create interest in a trilogy match between him and  IBF/WBA/WBO heavyweight champion Anthony Joshua, facing Luis Ortiz is the right way to go.

Ortiz recently destroyed Alexander Flores by a first round knockout last November. Before that, Ortiz lost to former WBC heavyweight champion Deontay Wilder by a seventh round knockout in November 2019.

Ortiz had won the first six rounds easily against Wilder and looked to be on his way to an easy lopsided 12 round decision win when he was caught by a huge right hand in the seventh round and put down.

Ortiz is ranked #4 with the World Boxing Council and looking to get a third-world title shot.

If Ruiz isn’t any better than he was against Arreola, Ortiz will knock him out quickly. The southpaw Ortiz is faster, stronger, and better skilled than Ruiz, even at 42.

Coming from Cuba, Ortiz has unmatched technical ability, and Ortiz couldn’t make the same mistakes against him as he did against Arreola and survive for long.

#15 WBC Charles Martin (28-2-1, 25 KOs) is the safer fight for Ruiz, but with less upside. Martin has won his last three contests against low-level opposition since losing to Adam Kownacki by a 10 round unanimous decision in 2018.

Ruiz would likely easily beat the 6’5″ Martin, but he won’t get much credit because he’s viewed as being on the same level as Arreola.

Martin would be a good option if Ruiz’s management wants to play it safe with him, but it won’t do much to help rebuild his image following his loss to Anthony Joshua in their rematch in 2019.

Deontay Wilder on Tyson Fury: ‘I just want to beat his a**’ »