Yordenis Ugas: ‘Errol Spence Jr is the next one on the list’

If so, likely, that won’t happen until the first half of next year, unfortunately. In the meantime, Ugas will need to fight someone else, be it Pacquiao or one of the top contenders in the World Boxing Association’s rankings.

With that being said, the way Pacquiao was talking at the post-fight press conference last Saturday night about how his body is starting to give him problems, it sounds like he’s going to retire from boxing and not face Ugas a second time.

The talented Cuban Yordenis took advantage of Pacquiao’s limited size and his inability to maneuver around the ring as he’d always done.

Additionally, the lack of snap of Pacquiao’s punches made them too weak to bother Ugas, who walked through them and landed his bigger shots throughout the fight.

“Now the plan is to unify the titles at welterweight,” said Yordenis Ugas immediately after his win over Pacquiao. “Everybody said he [Pacquiao] was the champion. Now they know who the real champion is.

“He’s the next one on the list, but most of all, I’m praying that he recuperates,” Ugas said in revealing that he wants Spence next.

UGAS WANTS SPENCE JR👋@YordenisUgas wants to unify the welterweight titles and has @ErrolSpenceJr on his list💪 pic.twitter.com/itKOGeeTEn

“I scored Yordenis Ugas winning the fight 8 to 4, maybe even 9 to 3, depending on what you were looking at and what you like,” said Shawn Porter to SnowQueenLA in him seeing Ugas beating Pacquiao.

“I thought Yordenis Ugas did an amazing job; he was well prepared and clearly more prepared than Manny Pacquiao.

“There’s really nothing you can say about it. Age is something that you can’t predict what’s going to happen and when it’s going to happen, and it did last night,” Porter said about age catching up to the 42-year-old Pacquiao.

“I still think that’s a fight where a healthy Errol Spence beats Yordenis Ugas,” Porter said in predicting Spence beats Ugas. “But what we did see last night was Ugas has what it takes to beat a certain fighter.

“He did what it takes to beat Manny Pacquiao,” Porter said of Ugas. “Before fighting me, he was still doing that. “I think with me, he got caught a little bit in the moment and couldn’t make adjustments.

“But I can see him [Yordenis] making adjustments with about anybody out there and beating them.

“I’m waiting to fight out. The WBO has mandated a fight between myself and Terence Crawford, so that’s what we’re looking for,” said Porter.

Right now, the obvious choice is to pick Spence over Ugas if that fight happens, but we don’t know if it’s going to. Spence’s eye injury could preclude the fight between him and the 2008 Cuban Olympian from ever happening.

We likely won’t know if Spence will come back from his eye surgery until early 2022 or later. When Spence returns, his management at PBC will likely have him take a tune-up fight rather than putting him in with the heavy-handed Yordenis.

I mean, it would be a wrong-headed move on Spence’s part to face a big puncher like Yordenis coming off of surgery because it would be getting hit with a lot of big shots right on his eye in that fight.

The safe thing for Spence to do is come back against a weaker puncher at 147 to make sure his eye can take getting hit. The ideal guy for Spence to face in his first fight back would be the 2016 Olympic gold medalist Daniyar Yeleussinov, who is unbeaten but doesn’t possess a big punch.

“Manny always brings excitement and always brings great crowds and a fan-friendly fight. He [Pacquiao] to bring the fight, but Ugas was just a better fighter. He just caught him in the better exchanges.

“As far as Manny, he’s just going to go back to his own country,” said Arreola. “He’s going to be the governor of the Philippines.

“The president, exactly. So he’s got bigger fish to fry. Maybe he’ll fight, or maybe he won’t. But the thing is, he doesn’t have to.

“I personally thought that Errol Spence was going to win that fight,” said Arreola when asked how he thinks Pacquiao would have done against Spence.

“The last three rounds, the last four rounds, he was slowing down,” Arreola said of Pacquiao.

The comments from Arreola about Spence likely to have knocked Pacquiao out were echoed throughout the boxing forums and on social medial last Saturday night.

Fans noticed how deteriorated Pacquiao looked against Ugas, and they felt that Spence would have destroyed the Filipino star in that state.

But at least had Pacquiao lost to Spence, he would have gone out against the #1 welterweight in the division. There would have been less of a fallout for Pacquiao getting beaten by a big star like ‘The Truth’ Spence than against the relatively unknown Yordenis.

Spence vs. Yordenis = the fight to make

“There are so many fights to be made,” said Arreola about Yordenis having a lot of options for profitable fights.

“He’s going to be studying this fight and studying all the fights. You’ll have the best of Spence against Ugas,” Arreola said.

Spence will have done his homework to figure out the ideal game plan to defeat Ugas should that fight happen, but you can expect the Cuban talent’s trainer Ismael Salas to do the same thing.

Salas came up with an excellent game plan to defeat Pacquiao last weekend, and it worked to perfection. If Spence is going to beat Ugas, he’ll need to do it the old-fashioned way by getting in the trenches and going to war with him for 12 hard rounds.

The main worry with Spence is whether his left eye will hold out on him in that type of back and forth fire-fight with a huge puncher like Yordenis.

If Spence’s eye is unable to hold up when getting hit, it’s going to swell up and cause him problems.

When Sugar Ray Leonard returned from eye surgery, his eye swelled up when he started fighting again. If that happens for Spence, he may not make it through a full fight with Yordenis without the match needing to be stopped. 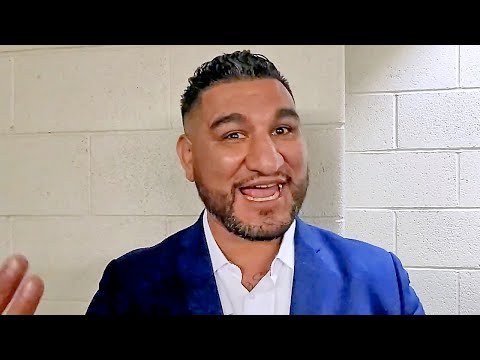