Why didn’t Canelo pick Golovkin to fight on Sept.18th?

By Sean Jones: Canelo Alvarez’s decision to revisit the negotiations with IBF 168-lb title holder Caleb Plant rather than offering the fight to Gennadiy Golovkin to save the September 18th date is a little perplexing.

Canelo could have saved the Mexican holiday date for September 18th had he asked Golovkin to fight him. Why didn’t Canelo do that? Would it have been too hard of a fight for Canelo, or is he holding a grudge against GGG?

There are arguably more boxing fans that would prefer to see Canelo (56-1-2, 38 KOs) fight Golovkin in a trilogy match than they would in seeing him facing a much less known Plant, who has exclusively faced weak lesser opposition since winning his IBF 168lb belt two years ago.

If Canelo had picked Golovkin, the fight would have been a perfect one for DAZN, and the fans would have to pay $75.99 as they will with him fighting Plant in a mismatch in November.

Although Golovkin is being talked about fighting WBA 160-lb belt-holder Ryota Murata in December, he would have likely accepted an offer from Canelo for September 18th if he’d been asked.

“Were you surprised that there wasn’t a quick pivot to Gennadiy Golovkin?” said Chris Mannix on Boxing with Chris Mannix on Canelo choosing not to pick Golovkin to save his September 18th date when he bailed on the Dmitry Bivol match and chose to move to his next fight to November. 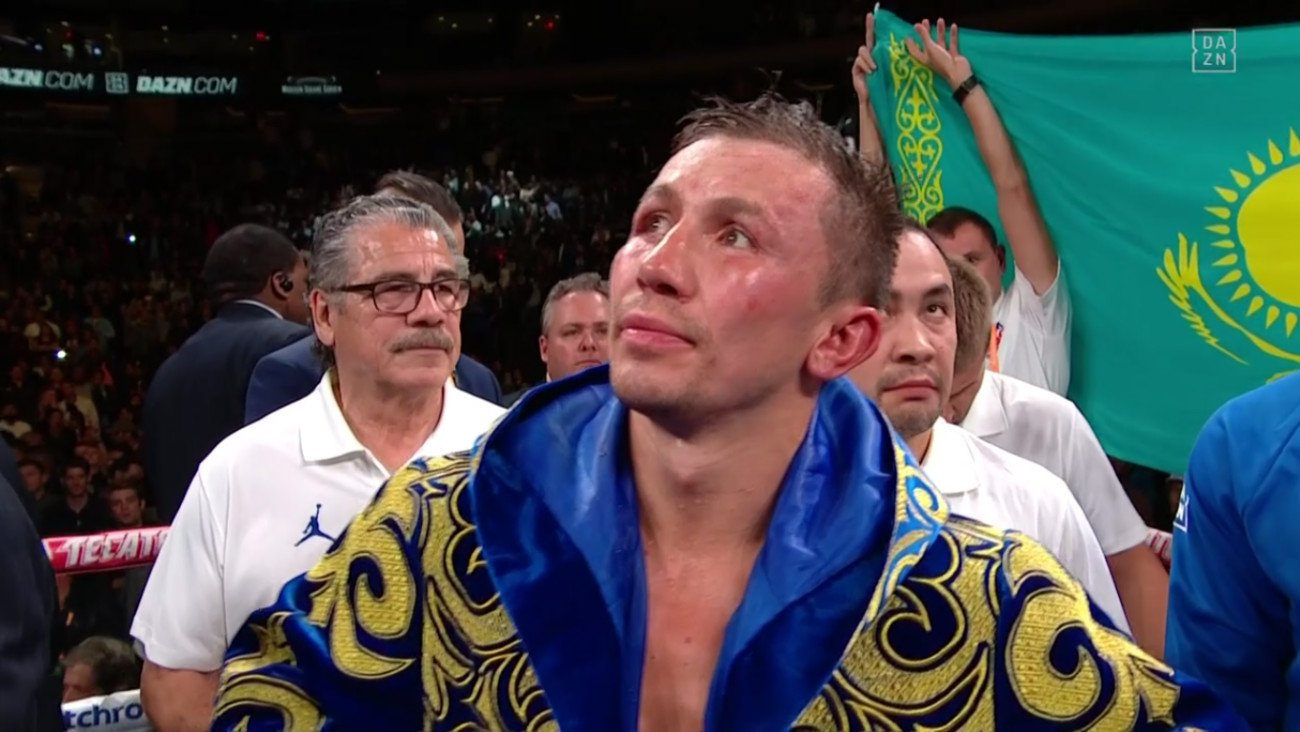 NEWS:   Joe Smith Jr. could get Canelo Alvarez fight in May if he wins tonight against Geffrard

“I know Golovkin is waiting for December for the Murata fight, but we also know that Golovkin wants to fight. He just doesn’t want to fight Demetrius Andrade or Jermall Charlo or any of these guys that are out there at the moment.

“I kind of for a split second, I thought, ‘Alright, the stars may be aligned.’ The two fighters [Canelo and GGG] are aligned with DAZN, the money is there, and DAZN still wants the fight.

“Golovkin, I don’t think would make a stink about going up to 168 for it [trilogy match with Alvarez]. Are you surprised we didn’t get that fight for September?” said an exasperated-sounding Mannix.

“Yeah, surprised, I’m stunned. It’s there for the taking,” said Lance Pugmire. “Gennadiy Golovkin absolutely wants this fight [with Canelo]; there’s no doubt about it.

“Even though he’s kind of gone into hiding and has been a little bit of a pouty kind of sullen guy after losing that fight against Canelo [in 2018].

“He wants that shot, and though he is at the advanced age of 39 now, it’s something he feels is a big part of his legacy,” said Pugmire.

If you’re Canelo and you’ve got a chance to make $40 million fighting a weak champion like Caleb Plant or make similar or greater money fighting Golovkin in what would be a much harder fight than could close, which direction are you going to go in?

“It also speaks of the resentment that Canelo Alvarez still harbors about Gennadiy Golovkin about taking the positives Canelo had with the clenbuterol and inflating it to something that Gennadiy said was super, super sinister,” said Pugmire.

“Look, they’ve kind of changed the rules since then. It was a small dose, and he was penalized for it,” said Pugmire about Canelo receiving a six-month suspension for his positive test for clenbuterol.

“It’s water under the bridge at this point. By all accounts to the people that I talk to in drug testing, Canelo Alvarez has been very adamant in making sure that he’s tested to the highest level.

“So Gennadiy Golovkin, whether it’s trying to make a phone call to Canelo Alvarez or doing whatever he needs to do. Some kind of mediator could have been brought in.

“Eddie Hearn is probably the perfect guy to calm these guys down and say, ‘Look, you want to talk about the richest fight possible right now. It’s you guys [Canelo & Golovkin] fighting for the third time.’

“It’s just stunning to me that no one can effectively have that conversion with Canelo to make that happen, because like you said, it’s a slam dunk, especially where they are right at this second,” said Pugmire.

“And it’s still a fight that generates more mainstream interest than all but two or three fights in boxing,” said Mannix on the trilogy match between Canelo and Golovkin.

There’s no other way of looking at it other than Canelo freezing Golovkin out because he’s upset with him and/or he sees him as too tough of a fight compared to the soft 168-lb champions he’d been beating to pad his credentials in a miserably superficial way.

Canelo is going to find out that unifying the 168-lb division against the weak paper champions will not do anything to further his legacy.

In fact, it’s a complete waste of time for Canelo because the fans now and from future generations aren’t going to be impressed that he unified the 168-lb division against no-namer paper champions. Fans remember Muhammad Ali from his fights with George Foreman, Ken Norton, and Joe Frazier.

When they think of Ali, those fights matter more to boxing fans than him fighting obscure guys. Canelo seems to be more into winning world titles for the sake of winning them and not caring about WHO he’s facing.

If they have a title at 168, Canelo wants it. But for some reason, Canelo never showed interest in winning world titles at 168 when David Benavidez was a champion. I wonder why?

Fans remember fighters based on them fighting great opposition. Canelo, unfortunately, has stopped doing that since his rematch with Golovkin in 2018.

Was it such a bad experience against GGG for Canelo that it put him off taking hard fights? It could be.

“The boxing insiders, you and I included, we understand that Canelo would be a heavy favorite in a fight like that,” said Mannix.

“Golovkin is in an advanced stage in his career, didn’t look great against Sergiy Derevyanchenko, has fought low-level fights since then, but that doesn’t matter to the average fan out there.

“‘Oh, GGG – Canelo 3, I’m in.’ That’s what DAZN recognizes, and that’s why they’re willing to pay a premium for a fight like this,” said Mannix.

“You know in Gennadiy Golovkin’s mind, he can’t trust the judges,” said Pugmire. “This guy is going to be starting with an all-out assault on Canelo Alvarez.

“This fight is bound to end with a hellacious knockout, which hasn’t happened in the first two fights. It’s going to be the best of the three fights, and like you said, everyone knows these two combatants.

“So why wouldn’t you try to make it done? DAZN, where are you? Eddie Hearn, where are you? Talk to Canelo. Make this thing happen,” said Pugmire on the Canelo vs. Golovkin III trilogy fight.

“You talk about a big crowd; you could do eighty + thousand with Jerry Jones in Dallas there,” said Mannix on the Canelo – GGG 3 match.

“I would love to see that fight in New York. You could probably do a massive gate at MSG [Madison Square Garden].

“It wouldn’t have the same crowd size as Jerry world or at Allegiant Stadium [in Las Vegas], but you would do a big number in New York City.

“Wouldn’t that be a great place to kind of continue that rivalry? I don’t know what’s going to happen with them. Is it [Dmitry] Bivol? Is it Golovkin? Do they wait for Plant?” said Pugmire.

It is more than a little strange that Canelo has preferred to take smaller fights against far less popular fighters like Billy Joe Saunders, Avni Yildirim, Rocky Fielding, Callum Smith, Danny Jacobs, and Sergey Kovalev in the last three years rather than face GGG again.

In November, Canelo’s likely fight against Caleb Plant is another example of the Mexican star taking a less popular guy than Golovkin.

For the average boxing fan, it’s hard to figure out why Canelo would purposefully use up three long years of his career fighting opposition LESS popular than Golovkin and not someone that they were asking him to fight.

No one ever asked Canelo to fight Saunders, Fielding, Jacobs, Kovalev, Smith, or Yildirim, yet those are the guys the Mexican star has faced.

When you know that Canelo would likely make more money fighting Golovkin than those guys, why would he choose to take the lesser paying fights?

Is Canelo bitter about being given grief by GGG over his positive clenbuterol test from there years ago, or is he afraid of how hard it’ll be to face him a third time?

You have to admit that it’s been a heck of a lot easier for Canelo to defeat the weak paper champions he’s been feasting on at 168 for the last three years than it would be if he were to have fought Golovkin in a trilogy match.

Vergil Ortiz Jr: I’m taking the fights the other fighters won’t do »