Ugas reacts to Pacquiao saying he was “easiest” opponent

By Max Schramm: Yordenis Ugas finally reacted to Manny Pacquiao’s comments this week about being one of the “easiest opponents” of his career.

Ugas defeated Pacquiao by a 12 round unanimous decision to successfully defend his WBA ‘Super World’ welterweight title at the T-Mobile Arena in Las Vegas.

In the weeks before the fight, Pacquiao had been grumbling about how the World Boxing Association had stripped him of his WBA ‘Super World’ 147-lb title and given the belt to Ugas earlier this year.

It didn’t sit right with Pacquiao that he was stripped of his title by the WBA and thought Ugas should have had to earn the belt by winning it inside the ring against him.

#PacquiaoUgas Many people write to me, they ask me about Pacquiao’s statements that I have been one of his easiest rivals in his career. The only thing I can say is that he goes to his house in peace, he recovers and that I respect him for being one of the best boxers in history.

Ugas resisted the urge to fire back at Pacquiao the way that some fighters likely would have done if they’d been told that they were one of Manny’s “easiest opponents” of his career.

Of course, Ugas is hoping to get a rematch with Pacquiao, and it wouldn’t make sense for him to anger the legendary former eight-division world champion by firing back an abrasive comment.

“Have you ever seen that punch?” said Porter referring to the wide looping right hands that Ugas was hitting Pacquiao with the entire fight.

“He [Yordenis] never hit me with that. You have a Hall of Fame corner. How do you not make an adjustment off of that?” said Porter about Pacquiao’s trainer Freddie Roach failing to come up with an adjustment to counteract the looping right hands Ugas was hitting him with the entire fight.

“Why hadn’t Manny tried rolling underneath that right hand? The adjustment that he made, which is a good adjustment, was keeping the left hand at home, but beyond that, if you roll, it gives you the opportunity to counter. 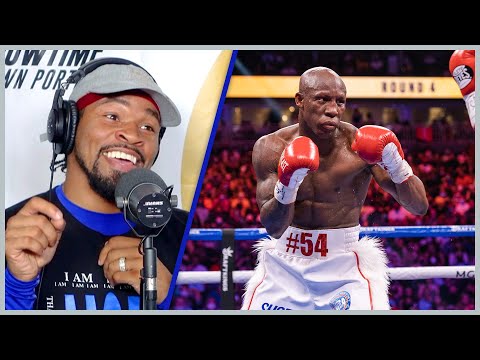