By Scott Gilfoid: Light heavyweight Tommy Fury sounded to some fans like he was begging YouTuber Jake Paul for a fight after his poor performance beating the tiny 5’7″ MMA fighter Anthony Taylor by a four round unanimous decision last Sunday night at the Rocket Mortgage FieldHouse, Cleveland.

Tommy, 22, beat Taylor by the scores 40-36, 40-36, and 40-36. It was a difficult fight to score because Taylor pressed the action the entire four rounds, whereas Fury spent the entire time missing and clinching.

Taylor had the better hand speed and looked like he was landing the more telling shots throughout the contest. There was no improvement in Tommy’s game from his last dreadful performance against domestic level fighter Jordan Grant last June.

“He has no excuse to not take the fight. Let’s get it on, Jake Paul,” said a desperate-sounding Tommy Fury after the fight. The way that Tommy was talking, he sounds like he has a sense of entitlement about Jake needing to give him a fight just by him fighting on his undercard.

“Just say you want the fight or not,” Tommy Fury continued. “If not, then just say it, and I can move on. I’ll go my way, and you can go your way but stop using my name.

“You need to stop running my friend!”

“Take the fight!”@tommytntfury and @jakepaul finally came face-to-face backstage and it was absolute chaos! 👀 pic.twitter.com/1398ZTZzMZ

“Four of his security team broke it up because the man can’t fight,” said Tommy Fury about his brief altercation with Jake in the hallway backstage after the fight.

“Imagine him in a street fight. He wouldn’t last two seconds. If he had no security team with him, he would have walked straight passed me.

“I’m not begging or pleading fight. I didn’t ask to be on this undercard. I’ve done my part tonight. He did his part tonight. Why not make it next? It’s the fight on the tip of everyone’s tongue. No one wants to see him fight another MMA kid,” said Tommy Fury. 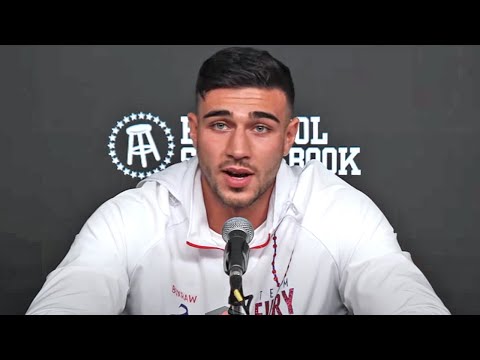 It sure did sound like Tommy Fury was begging Jake Paul for a fight afterward, didn’t it? Instead of Tommy talking about his fight with Taylor at the post-fight press conference, he spent the entire time asking Jake to fight him.

Why does Tommy want to fight a YouTuber instead of a real boxer? That’s a question that Gilfoid would like to know.

It sounded like Tommy wants the cash-out payday that he would get in a fight with Jake so that he can retire from boxing because he’s clearly going nowhere with his career.

Tommy hasn’t shown any talent in his game that suggests that he’ll be good enough to mix it with a top-tier light heavyweight one day.

You can argue that the ONLY reason Tommy Fury was added to the social media influencer Jake Paul’s card last Sunday night is because of his last name, Fury. Jake obviously wanted to get some boxing fans to purchase his PPV card on Showtime.

He has no intention of Fighting Tommy, and for a good reason. The guy has a godawful fighting style, even more, boring than Tyson Fury.

With how Tommy spoiled the entire four rounds against Taylor, it would be a mistake on Jake Paul’s part to choose to fight him next or at any time in the future.

Tommy Fury is nowhere near the level of Jake Paul right now. Maybe with more experience, Tommy might develop some skills, but he’s too flawed, and he has the same ugly spoiling style as his half-brother WBC heavyweight champion Tyson Fury with all the clinching and back peddling.

Tyron Woodley: I won the fight with Jake Paul »