Crawford (37-0, 28 KOs) had been waiting/hoping to fight Pacquiao for the last eight years, and all those wasted hopes evaporated overnight last weekend with the 42-year-old Filipino superstar being soundly beaten by the unheralded Cuban fighter Ugas (27-4, 12 KOs) at the T-Mobile Arena in Las Vegas.

Crawford should have gotten a fight against Pacquiao a long time ago when they were both signed with Top Rank. Ultimately, it would have been an easy one to make if Pacquiao was interested in that fight.

Manny making excuses after his loss

Pacquiao was quick to make excuses after the fight, blaming his defeat on his legs cramping up in the second round. Further, Pacquiao said he overtrained and would have beaten Ugas if not for his legs gave him problems.

We saw of the fight, though, that Pacquiao was having problems even in round one, and it didn’t matter how much he moved around the ring. He was always in range of the Cuban. Ugas was able to nail Pacquiao with shots using his long reach, causing him to hesitate.

“Looks like @ErrolSpenceJr gone need me, after all, though😁. “I know you were really mad about that fight last night because I was 🤣🤣🤣, but not in a hating way, just in a missed opportunity way.

“Don’t beat yourself up about it. Get well, Champ🤝,” said Terence Crawford on Twitter after watching Pacquiao lose to Ugas.

Spence, more than anyone, is the guy that watched his hoped-for fight with Pacquiao down in flames last Saturday night.

After all, Spence (27-0, 21 KOs) was the one that was supposed to have been fighting Pacquiao last weekend, if not for an eye injury he sustained in training camp.

As Spence’s trainer Derrick James said after watching Pacquiao lose to Ugas, ‘what’s the point’ in trying to fight the Filipino star now? Spence won’t get any credit if he beats Pacquiao, and the boxing public won’t want to see that right now.

It’s funny how they walked @YordenisUgas into saying fight a injured man🤔 now they already tying to put that fight in the media. Makes me think a little bit?🤣🤣 they play a dirty game don’t they.

I think what Crawford is talking about is that Ugas was lured into talking about Pacquiao not being 100% for the fight due to his legs cramping, which kept him from getting the full credit that he otherwise should have received for the victory.

Spence would have knocked Pacquiao out

“It’s about timing, not about speed,” said Spence’s trainer Derrick James to Fighthype in reacting to Ugas’ win over Pacquiao.

“If you can time him and he keep Pacquiao offbeat, [you can beat him. [Yordenis] Kept him off balance, and he kept hitting him to the body, and Pacquiao didn’t want to engage him.

“I think Errol’s a more vicious puncher, and he probably would’ve knocked him [Pacquiao] out,” said James.

“What’s the point of [Errol fighting Manny Pacquiao) now?” said James in remarking that there’s no reason for Errol to fight Manny after watching him lose to Ugas.

It doesn’t sound like Pacquiao will continue his career after this loss. The only way Pacquiao could come back is to fight Yordenis in a rematch at this point, and he didn’t sound overly excited about wanting to return to the ring when speaking at the post-fight press conference.

Assuming Spence does come back from his eye injury, his only hope for big money fights at 147 is to take on Yordenis first in a unification match and then face Crawford for the undisputed championship.

If Ugas fights the way he did last Saturday, he could give Spence a lot of trouble and might even beat him. 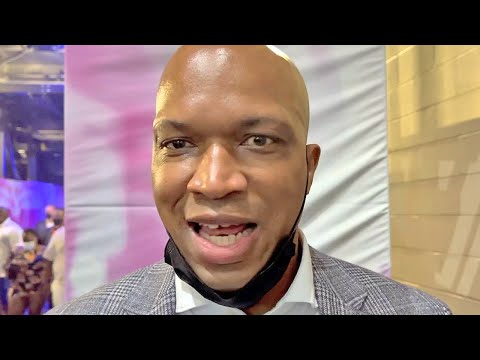