By Matt Lieberman: Marco Antonio Barrera says Manny Pacquiao fought well in a losing effort against Yordenis Ugas last Saturday, and he’d like to see him rest and then return to face Errol Spence Jr.

It’s obviously easier for Barrera to take Pacquiao’s losses in stride, as that’s how he dealt with defeats during his own long 23-year pro career.

Barrera didn’t let defeats stop him from continuing to fight, and he had a lot of success after losing to Pacquiao, Junior Jones, and Erik Morales earlier in his career.

It seemed that Pacquiao was uncomfortable with pressuring Ugas, as he was getting caught by big right-hand shots to the head and occasionally to the body from the Cuban fighter.

With Pacquiao’s legs not working well for him because of the cramping, he was coming forward in straight lines, making him an easy target for Ugas’ right hands.

It’s unclear if Ugas had a problem with his left, but he mostly used his right hand throughout the fight as his primary weapon. But the right hand proved to be enough for Ugas to control Pacquiao’s attacking style to keep him in check.

As far as Pacquiao coming back to resume his career, he sounded like he was planning on retiring and not continuing his career.

“The Cuban fighter did a good job and had a good game plan,” said boxing great Marco Antonio Barrera to Litle Giant Boxing on Yordenis’ win over Pacquiao.

“What was missing [for Pacquiao] was him to pressure more to do something different. But he [Ugas] won the fight well, and it was a great fight.

“That’s boxing; they changed the game plan at the last minute,” Barrera said about Pacquiao needing to switch from preparing for Errol Spence Jr. to replacement opponent Yordenis. “I think Pacquiao should rest and continue with his plans to fight Errol.

“I think Pacquiao vs. Spence would be 2x the fight this was and more pressure in the fight,” said Barrera.

Spence is out with an eye injury, and he might not be back until 2022. If Pacquiao wants to wait that long for the Spence fight, it’s possible they can still fight.

The wildcard in all of this is the presidential election in the Philippines in early 2022. Pacquiao is running for office, and if elected, that would end his boxing career anyway.

At this point, Pacquiao might not want to risk fighting again this year and possibly getting beaten a second time. It wouldn’t be a good thing for Pacquiao to lose right before the election in March.

Pacquiao passed the torch to Ugas

“He’s very fast and has a good jab. He was throwing his right hand at Manny Pacquiao all night,” said Barrera when asked about his thoughts on Ugas’ performance against Manny.

“Pacquiao was getting hit flush with that right hand, but not with a lot of power.

“I think Pacquiao passed Ugas the torch, so he could now fight Errol Spence. And I think it would be a good fight.”

You’d get a strong argument from boxing fans that Pacquiao didn’t pass the torch to Ugas as the next star in the sport. If it were that easy, Jeff Horn would have been transformed into a star after beating Pacquiao.

“I think he should rest,” Barrera said of Pacquiao. “He’s an extraordinary fighter. Even though he’s 42-year-old, Pacquiao looked really good. Rest up and take the Errol Spence fight.

“Why not? I would love to see Pacquiao vs. Spence fight. That’s why I came. Thank you for the tickets, Pacquiao.

“We talked, and he [Pacquiao] gave me tickets to his fight. Rest up, Manny. Take it easy. Whatever happens, you have many more things to accomplish,” said Barrera. 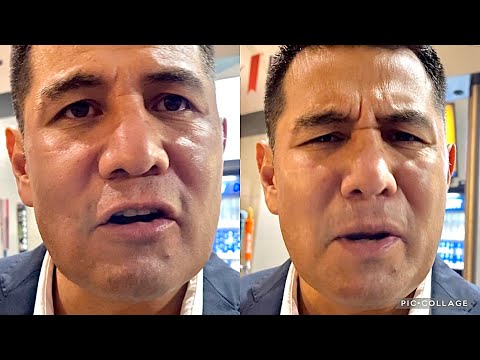