By Allan Fox: Oscar De La Hoya will be taking his first step towards what he believes will lead him back to become a world champion when he takes on Vitor Befort on September 11th at the Staples Center in Los Angeles, California.

De La Hoya turned 48 last February, and he hasn’t fought since 2008. Despite his ripe age and his 14-years of inactivity, he believes he can accomplish what heavyweight George Foreman did when he won a world title at age 45 in 1994 against Michael Moorer.

It’s going to be more difficult for De La Hoya to win a world title than in his 40s than it was for Foreman because he’s not a huge puncher like he was, and he doesn’t have the size that he possessed.

Moreover, Foreman had the perfect champion for him to win a world title against in taking on the much smaller Michael Moorer, who started his career at 175. Moorer never had the size to beat the larger heavyweights, so it was an ideal situation for Foreman.

With De La Hoya weighing around 175, he’s going to have a lot of problems if he attempts to capture a world title at light heavyweight against champions Artur Beterbiev, Dimitry Bivol, or Joe Smith Jr.

Those guys have a lot of power and skills going for them, and they would very likely KO De La Hoya.

“It’s a challenge to fight a style that is totally different. It’s a big challenge for me,” said Oscar De La Hoya on fighting former MMA star Vitor Belfort. “No sparring yet. I want to peak at the right time.

It would be advisable for De La Hoya to get in the best shape possible before he begins sparring because if he’s slow and fat, it might take away his motivation if he gets beaten up in sparring.

“The punches are coming from different angles. Everything is a challenge,” said De La Hoya about how different it’ll be fighting a former MMA guy. “It’s 9/11, which stands for something huge. The stars are aligned or whatever.

“Yeah, 9/11 and the whole Mexican weekend. I’ve been thinking about the exhibitions that we’ve seen. It just doesn’t do it for me,” said De La Hoya in giving his rationale for why he decided to make his fight with Belfort to count on the record books as a true fight.

“If I’m going to go into the ring and sacrifice my life, then let’s go all in. I have nothing against Belfort or his legacy. He’s going to get some punches in and it’s going to hurt the next day and the following day, but it’s going to be fun. This is what I miss. I’m getting myself into this. I love this.

“I believe so,” said De La Hoya when asked if he can become a world champion again and replicate Bernard Hopkins.

“And I think with this mentality and this mental strength that I have now. With training smarter with my motivation with life in general, it’s a different route that I’m taking.

It’s literally been groundhog day for me for many years, doing the same s***, but now it’s like I’m taking a different route. This route here, it’s much easier. 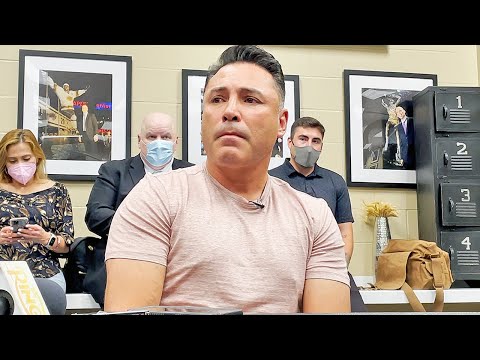 “It’s strenuous, it’s hard, it’s difficult for your body, it’s tough. I’m 48, but this different route is much easier. S*** why didn’t I figure it out a long time ago.

“The fact that George Foreman has done it and Bernard Hopkins has done it. Hey, maybe it’s my time,” said De La Hoya.

Hopkins wasn’t out of boxing for 13 years the way De La Hoya was, so using him is a poor example. Foreman was out of the sport for over 10 years, but he was living a clean life.

Yeah, Foreman had to lose a lot of weight when he came back at age 39, but he wasn’t 48 like De La Hoya. Also, Foreman had the power and the size to succeed. He also chose his opponents well. He didn’t fight the Klitschko brothers, Lennix Lewis or Mike Tyson.

De La Hoya’s only chance of winning a world title is if he melts down to 168 and faces Caleb Plant for his IBF belt. Plant is a vulnerable champion.