By Charles Brun: EBU welterweight champion David Avanesyan’s manager Carl Greaves says Conor Benn turned down a fight with David for his EBU title. It’s obviously interesting that Benn’s team doesn’t feel he’s ready to fight Avanesyan because of the way he talks; he sounds like he feels he can beat anyone.

Greaves says the team for Benn (18-0, 12 KOs) feels he’s not ready to face a fighter like Avanesyan (27-3-1, 15 KOs), so instead, they’re opting to fight journeyman Adrian Granados this Saturday night on September 4th in Leeds.

Carl views the Benn vs. Granados fight as “clever match-making” by Conor’s promoters at Matchroom Boxing in putting him in with a veteran nearing the end of his career. Benn will get a good name on his resume and avoid a potential loss.

Avanesyan will be defending his EBU welterweight title against Liam Taylor (23-1-1, 11 KOs) on October 2nd. They were originally going to defend against EBU mandatory Jordy Weiss (29-0, 3 KOs) of France, but he suffered an injury and was replaced by Liam Taylor.

When that fight failed to happen, Avanesyan chose to keep his EBU title and defend it.

“The situation with Jordy Weiss is the [EBU 147-lb] mandatory,” said Avanesyan’s manager Carl Greaves to Pep Talk UK. “He’s 29-0, but he withdrew with an injury. #2 is Conor Benn; he didn’t want the fight.

“Obviously, we knew that from the start. Anyway, he made that clear, and then we went down to #3, Liam Taylor, and he accepted the challenge.

“We went out to purse bids, and Sky Sports won the purse bid. So he’s [Avanesyan] going to be defending his European title on October 2nd on Sky Sports,” said Greaves.

“He’s not ready for David; he doesn’t want to fight David,” Greaves said when asked why Conor Benn didn’t take the fight with Avanesysan.

“We knew that from the start anyway. We were told by his trainer and Eddie that he [Benn] wanted two more fights before David.

“We knew they [Team Benn] would never entertain the fight. They wanted us to just vacate on the condition that they’d get David a big fight, but they couldn’t manage to do that.

“So, we’re not vacating. We’ve kept the European to keep David busy and keep him earning good money.

“Obviously, he’s got a family and bills to pay. So he’s going to keep busy defending the European title. It’s one of the belt titles out there, and then hopefully get a final eliminator for a world title.

“Definitely, it was a fight there,” Greaves said when told that a fight between Avanesyan and Conor Benn was a fight to be made after Davis’s win over Josh Kelly last February.

“He [Conor Benn] was going to fight Josh Kelly, and then when David upset the applecart and spoiled the party, it would have been an ideal fight to make between Conor Benn and David, but they [Team Benn] didn’t want it.

“So, it’s a shame because it would have drawn big numbers in England. David is a big name over here in England. So we move on,” said Greaves in expressing disappointment about Benn not wanting to face Avanesyan.

If Conor Benn isn’t ready for Avanesyan, it means he’s probably not ready to face any of the champions at 147 or even the top contenders like Vergil Ortiz Jr., Shawn Porter, Keith Thurman, or Jaron Ennis.

“It’s clever match-making, really,” said Greaves when asked how Benn does against Adrian Granados next Saturday.

“Granados at the end of his career. Conor is fresh, young, hungry, and up and coming. It’s a good name to have on his record, but he’s [Benn] getting him at the right time, I think.

“But you never know. These veterans always have one good fight left in them, but we’ll see.

“Again, the European title,” said Avanesyan. “On October 2, I’ll do my best. One week before I start training. October 2nd is the fight. Liam Taylor.”

“I’m happy to have this fight, this win. Josh Kelly is a good boxer,” said Avanesyan reflecting on his stoppage win over Josh Kelly last February.

Obviously, the journeyman Granados is a gimme type of opponent; someone brought in for Benn to showcase his talent without looking bad or getting beaten. 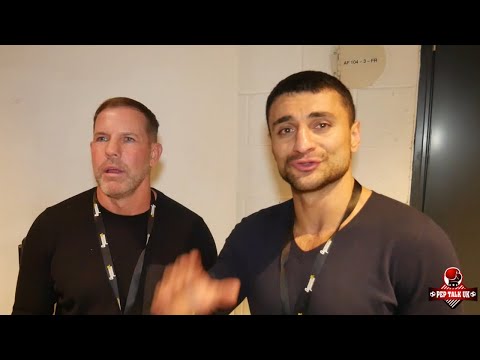