By Sean Jones: Canelo Alvarez has been given a warning from Keith Thurman about the ‘American style‘ that Caleb Plant has going for him that could cause him problems when the two meet on November 6th for their undisputed 168-lb championship.

IBF super middleweight champion Plant (21-0, 12 KOs) has the Floyd Mayweather Jr style down pat, knowing it better than anyone in the 168-lb division and far better than Canelo, who copied the American style that Floyd uses, according to Thurman.

Thurman notes that Canelo (56-1-2, 38 KOs) used to be a flat-footed come forward type of fighter until Mayweather Jr showed how ‘limited” his fighting style was when he schooled him in 2013, winning a 12 round decision.

After that fight, Canelo more or less copied Floyd’s style, depending on who you ask. When you Canelo now, you see a lot of Mayweather’s style on him, but obviously, the copy is imperfect.

Although Canelo does many things Mayweather did, he’s not copied it well enough to avoid struggling when fighting quality guys.

Thurman says Canelo got exposed a little in his last fight against Billy Joe Saunders last May before he shattered the British fighter’s left orbital bone in the eighth. Before the injury occurred, Saunders was winning rounds, taking advantage of Canelo’s low work rate and stamina problems.

“Great fight; I love what he brings into the ring. We know Canelo, whatever pork he’s been eating, he’s strong. Do you know what I’m saying?” said Keith Thurman on Friday.

“Damn, we know he’s strong, you know? And we know that Plant has never been in with nobody that strong.

“I think it’s a great fight. I didn’t watch it. Some people say he [Canelo] got a little exposed [by Billy Joe Saunders] because he’s got his movement now.

“You know how to step back now. It’s not in a lot of Mexican fighter’s protocol, that nice little step back. Mayweather taught him a few things.

‘Oh, I can duck. I can pull and take to the left.’ Now, Canelo has a little bit of this and that, but American fighters, we had that for a long time, Canelo.

“We had that for a long time. Not to say what you do ain’t pretty. It’s pretty, boy, because you was flat-footed, you was walking forward, and Floyd [Mayweather] showed you how limited that style was with his speed and athletic ability.

“No one else has done it [to Canelo]. He’s had great challenges. GGG should have took him in the first rodeo. He didn’t. It went to a draw, and Canelo out-performed him. What happened, GGG? We don’t know. We don’t care no more.

“Canelo went past that. I do think in different divisions; there are great challenges for Canelo and this Plant fight. I think this fight is a great challenge for both fighters at this point in their careers,” said Thurman.

It certainly looks like Canelo is now using an abbreviated form of Mayweather’s ‘American style,’ but he’s still using the style he had before. It’s a mix now.

Lately, Canelo seems to be using more of his old style of fighting, which involves him walk down his opponents and looking to hit them with everything he has. It’s worked for Canelo because he’s been fighting weak 168-lb champions Callum Smith, Rocky Fielding, and Billy Joe Saunders.

You can argue those guys would have never won a world title at 168 if guys like David Benavidez, David Morrell Jr, and Carlos Gongora held the belts at the time those fighters fought for their titles.

“Just box smart, box hard,” said Thurman when asked what does Plant has to do for him to defeat Canelo.

“One of the biggest keys to victory is don’t get caught by that power. Look, I love that match-up; I love so many of the match-ups that are happening now.

“I think the Mayweather stuff is over. Staying undefeated,” said Thurman about how fighters like Mayweather were protecting their records by carefully picking beatable opponents.

“Now, it’s going back to the MMA stuff. You win some; you lose some. And you get back in the ring and do it again. Great champions fall, and they rise back to the top. It’s any given Sunday,” said Thurman.

For sure, Plant can beat Canelo if he boxes start and don’t make the same dumb mistakes that we saw from Callum Smith, Saunders, Rocky Fielding, Sergey Kovalev, and Avni Yildirim.

You don’t stand in front of Canelo in a stationary manner unless your name is Gennadiy Golovkin. And if your name is Golovkin, you’re not going to get a fight with Canelo. 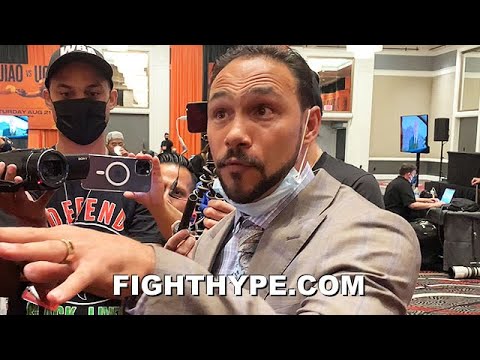 
« Keith Thurman: Ugas is a bad style for Pacquiao