By Barry Holbrook: Promoter Bob Arum says he’s confident that the undisputed heavyweight clash between his fighter Tyson Fury and Anthony Joshua will occur between February and April of 2022, provided both champions win their next title defenses.

As long as everything goes smoothly for Joshua and Fury, the two will meet in the first quarter of next year, confirms Arum. What he’s not sure about is precisely where the fight will take place.

Ideally, Arum would like to stage the Joshua – Fury fight in the UK inside a large football stadium during April.

Arum says he’s serious about placing the fight in the UK. He’s displeased with Joshua’s promoter Eddie Hearn questioning his true rationale for wanting it there.

It’s disappointing to Arum that Hearn is so suspicious of his motives for wanting to set up the Joshua-Fury fight for the UK.

Hearn believes the worst and is invalidating what Arum has to say about giving a gift to the UK fans by staging the fight there.

In an interview this week, Hearn said that Arum isn’t serious about wanting to stage the Joshua vs. Fury fight in the UK and that he’s just talking so that he can get fans to focus on the Fury vs. Wilder III fight on October 9th.

“February, March, or April of next year, I believe that to be the case,” said Arum to iFL TV when asked if he believes he can make the Joshua vs. Fury fight in early 2022.

“Absolutely, it’s the fight that should be had that everybody wants to see. So I believe that fight will take place in the first quarter of next year,” said Arum.

As long as Joshua and Fury both do their part by winning their interim fights against Usyk and Wilder, the two will be ready to meet in their long-awaited undisputed bout in early 2022.

It’s important that Joshua not overlook the threat posed by his WBO mandatory Usyk (18-0, 13 KOs) because this isn’t a guaranteed win like his last title defense against 40-year-old Kubrat Pulev.

Usyk, 34, is smart, and he’s not going to get hit with repeated uppercuts as we saw with Pulev, who never made any adjustments during their fight last December.

Joshua – Fury must happen in the UK – says Arum

“What does a fight with Fury – Wilder have to do with what I’m saying about wanting to do Fury – Joshua,” said Arum in trying to understand Hearn’s recent comments about him being disingenuous on wanting to place the fight in the UK. 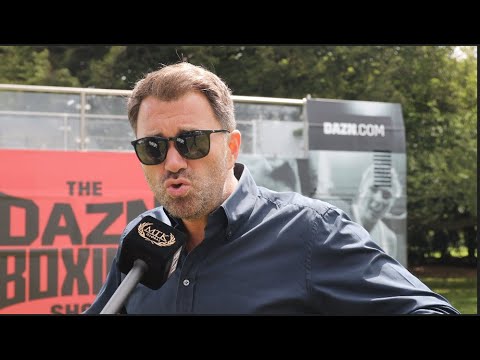 “But again, that’s a man [Eddie Hearn] who is talking about thinking. What I’m saying is, I would love to do Joshua & Fury, where it belongs in the UK.

“You have great arenas in the UK. Do it in April, the sun’s out, it’s beautiful, and the fight would do a tremendous amount of money. Would it do the same money as a crazy site fee from Saudi Arabia?

“The pay-per-view numbers, the numbers at gates. That we should all be talking about how we can make it work in the UK.

“There are other aspects other than ticket sales. What about a company sponsoring the whole event and getting behind it and getting all the credit for keeping it in the UK.

“There’s a lot of ways to make it happen. But if you throw up your hands and say, ‘There’s so much more money in Saudi Arabia or Qatar than there is in the UK, so forget about it,’ then you’re not going to accomplish it.

“I think we in boxing have every obligation to make the fight happen in the UK,” Arum said.

Staging the epic battle between Joshua and Fury in the UK makes perfect sense, and Arum clearly has the right idea. It’s a great move on this legendary promoter’s part to forget about the money and place the fight where it should be in the UK.

“He’s talking before he’s thinking,” said Arum when told that Hearn doesn’t think he truly cares about the UK fans when he talks about wanting to stage the Joshua vs. Fury fight in Great Britain.

“What is it that I’ve said means that I don’t care about the UK fans? That’s a non-sequitur.

“If I say ‘the fight should be in the UK because you can,’ and he [Hearn] says, ‘Arum doesn’t care about the UK fans,’ that’s a non-sequitur.

“What does that statement have to do with anything with what I’m saying about the [Joshua – Fury] fight should be in the UK?

“Again, I’ve now analyzed people who talk without thinking. We had a guy that was the president of the United States, and that was his big vice other than others that he had.

“That’s the problem with Eddie Hearn. He talks before he thinks. It makes no sense that I’m saying that ‘let’s do everything we can to make the fight happen in the UK,’ and he says, ‘Bob Arum shows that he doesn’t care about the UK fans.’ What does one have [to do with the other?]. What’s he talking about?” said Arum.

For the sake of the UK fans, Hearn should give Arum the benefit of the doubt and assume that he’s serious about wanting to stage the Joshua vs. Fury fight in the UK.

Of course, if Hearn is deadset against staging the fight in his own country, it makes sense for him to cast doubt on what Arum says.

It would be better for Hearn just to come out and tell the fans that he can’t stage the Joshua-Fury fight in the UK because he can make more money from a site fee if he stages the contest in the Middle East.

It seems like Hearn has a lot of distrust of Arum for some reason,. That’s too bad because he sounds serious, and he’s not the type of promoter that would talk about using a separate fight location to help drum up interest for one of his others.