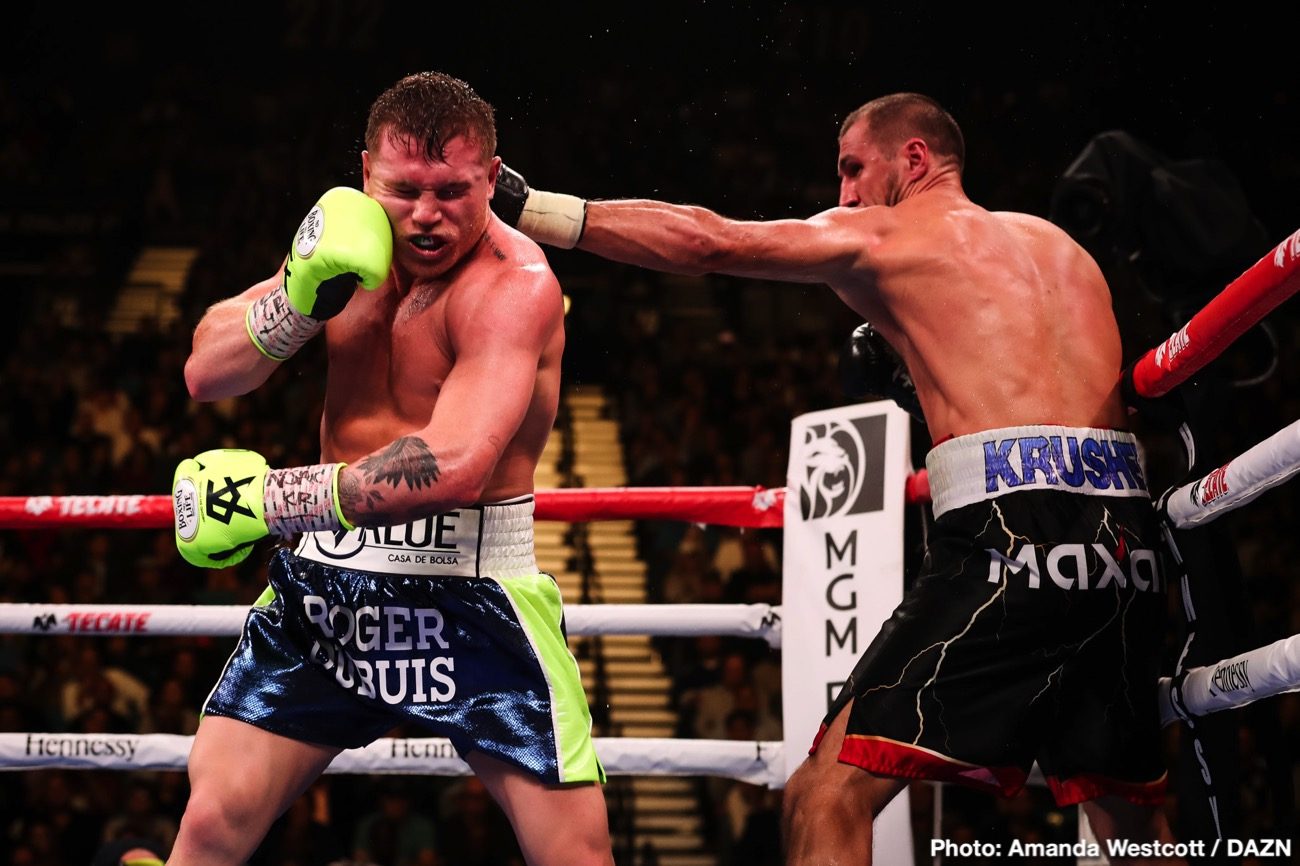 By Dan Ambrose: Former light heavyweight champion Sergey ‘Krusher’ Kovalev is calling out Canelo Alvarez on social media, asking for a rematch to avenge his eleventh round knockout loss from their fight in November 2019. Kovalev says he’ll fight Canelo for “free,” which would obviously be hard for fans to believe.

Canelo needs an opponent for his September 18th fight after his negotiations with IBF super middleweight champion Caleb Plant failed to pan out.

According to Matchroom Boxing promoter Eddie Hearn, WBA light heavyweight champion Dimitry Bivol is the Plan-B option for Canelo. Still, it’s possible that talks could be revived for a clash with Plant (21-0, 12 KOs).

Canelo wants Plant’s IBF strap to become the undisputed, and it’s a much easier fight for him than taking Bivol or IBF/WBC 175-lb champion Artur Beterbiev, another fighter mentioned as a possibility.

The 38-year-old Kovalev (34-4-1, 29 KOs), who hasn’t fought since his loss to Canelo almost two years ago, claims he wasn’t in the best condition for the fight. 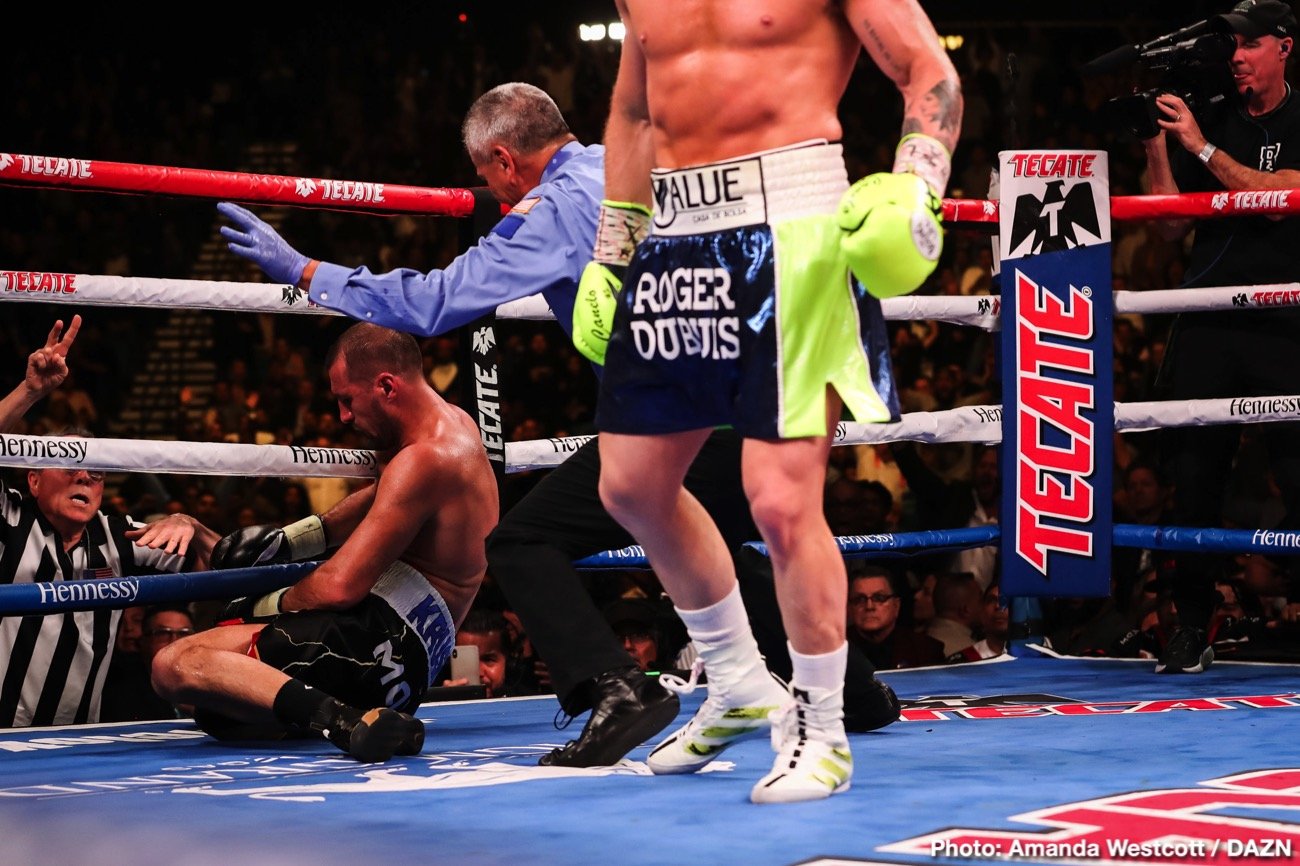 Canelo isn’t going to take Kovalev seriously because the Russian fighter hasn’t been active since his loss to the Mexican star in 2019, and it’s not a fight that the boxing public would be interested in seeing at this point.

NEWS:   Dmitry Bivol must decide next opponent now that Canelo Alvarez out of picture

Trying to sell a rematch between Canelo and Kovalev would be next to impossible, given how their fight ended. It’s not just how the match ended.

It was the odd way that the match played out, looking like Kovalev was in first gear the entire contest and not putting power into his shots. It looked like Kovalev was literally taking it easy on Canelo out of gratitude for being given the fight.

Although Kovalev claims he’ll fight Canelo for free, that’s not believable. Obviously, he’ll want to be paid for a second fight with Alvarez (56-1-2, 38 KOs).

Many boxing fans thought the Canelo-Kovalev fight looked fixed from 2019, as Kovalev didn’t appear to be putting any power into his shots. It looked like Kovalev was having a light spar with Canelo.

In the one round that Kovalev briefly turned on the head on Canelo in the eighth, he looked like he could have stopped him.

Instead of continuing to take the fight to Canelo in rounds 9 through 11, Kovalev went back to boxing him and not attacking the way he’d done in the eighth.

“Hey, Canelo! @canelo @goldenboy @klimasmanagement @main_events. First of all, I’ll be honest with yourself, and then let’s make a rematch if you are a real champ and want to prove that you are the best boxer in the world.

“Right now, you have a lot of choices of boxers who want to fight you because of a lot of money. But I’m ready to fight you in our rematch just for free to approve that you got me when I was not in my best condition.

“It’s for me is the most motivation fight in my life and my boxing career. And I’m sure that I will get a victory under you. Let’s make this fight if you are the REAL man to happen this fight 🥊
P. S. I’m here! Just call me👊🏼”

If Kovalev had continued to fight for the last year and a half since his loss to Canelo, he would have a better shot at getting a rematch.

It would still be improbable Canelo would entertain the possibility of a rematch, but Kovalev would have at least room to make an argument that he deserves one. 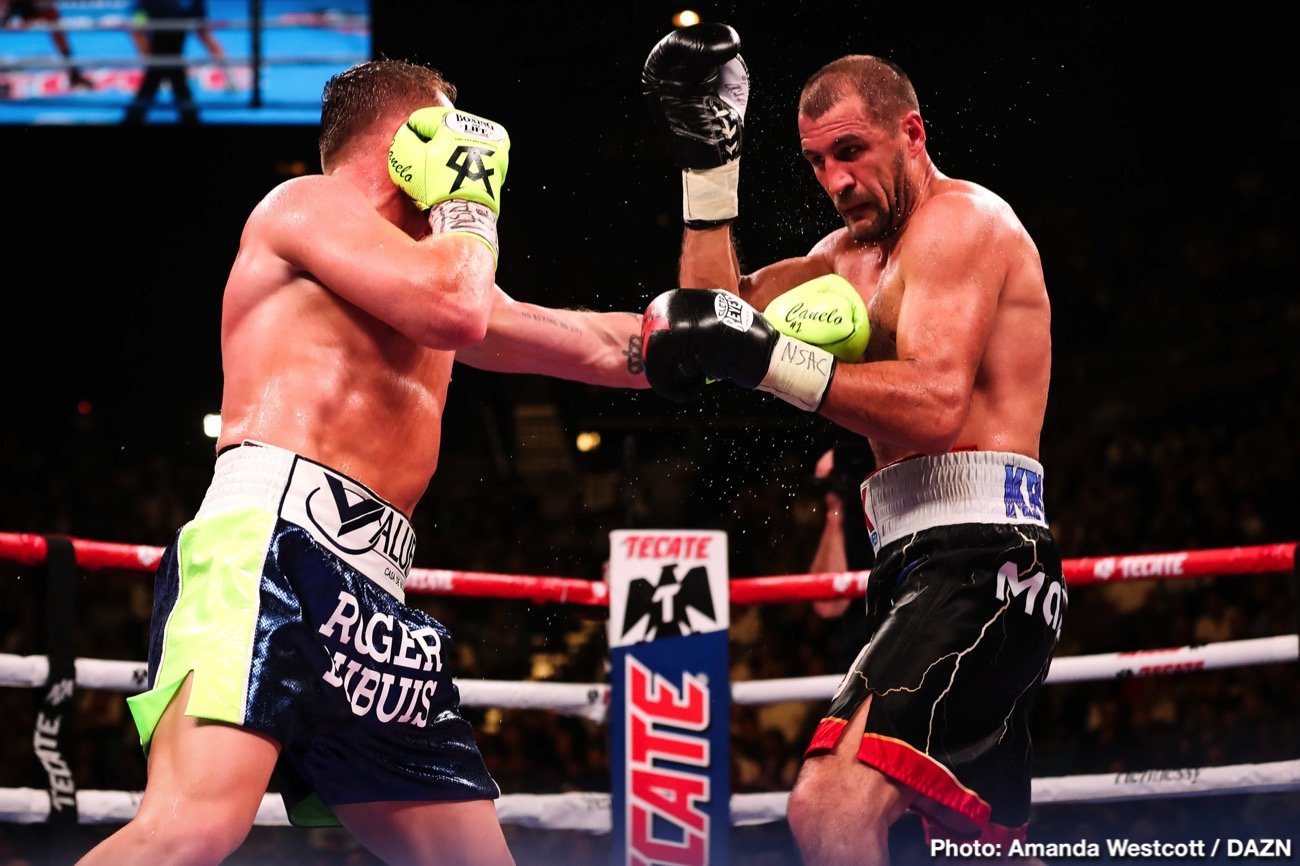 Kovalev looks like a shot fighter at this stage in his career, losing to Canelo, Eleider Alvarez, Andre Ward, and almost getting stopped by Anthony Yarde.

It’s fair to say that if Kovalev challenged Beterbiev or Bivol for their world titles at 175, he’d lose badly to both. However, it’s doubtful that either of those champions would entertain the idea of fighting Kovalev because he’s done nothing to keep his career alive.