Frank Warren shoots down claims of poor ticket sales for Fury vs. Wilder 3

By William Lloyd: Promoter Frank Warren shot down the rumors of poor ticket sales as the reason for the Tyson Fury vs. Deontay Wilder III trilogy fight being postponed to October 9th.

Warren says over $14 million worth of tickets had been purchased for the previously scheduled Fury-Wilder 3 fight on July 24th, but the fight had to be postponed due to Fury catching COVID-19.

Poor ticket sales are one of the rumored reasons why the Fury vs. Wilder 3 fight was postponed. Another rumor is that Fury was knocked out by his 21-year-old sparring partner Jared Anderson, and he wasn’t have a good camp.

Getting knocked out by Anderson obviously would be a problem for Fury or any heavyweight looking down the barrel of Wilder’s big guns. These are all just crazy rumors that have come about by people who don’t buy Fury’s COVID-19 excuse for why he’s postponed the fight with Deontay.

It’s not helped that there’s a photo circulating of Fury in a casino, posing for a photo without a mask, looking happy and healthy.

Boxing fans who saw the photo wonder how a sick person with COVID looks so good and isn’t wearing a mask to protect others from becoming infected.

“My reaction is like everybody. We’re all very disappointed, but those are the times we live in. He caught COVID, and that’s it. So he couldn’t fight. That’s the end of the story,” said Frank Warren to iFL TV about Tyson Fury needing to postpone his July 24th fight with Wilder.

“It doesn’t matter what I think, or anybody thinks. We’re all disappointed. It just has to be rescheduled, and it’s been rescheduled for October, and it’ll take place then.

“The one I feel sorry for personally is Tyson because he’s been in training for God knows how long. He’s been working very hard.

“By the time he gets inside the ring, it’ll have been 20 months since his last fight.

“Hopefully, there won’t be a problem with it. Bob Arum is very, very disappointed,” said Warren.

20 months is a long time for a fighter to be out of the ring, especially for Fury, facing the knockout artist Wilder. There’s much on the line for this third fight between the two.

It’s not just a simple case of Fury getting his contractually-obligated rematch with former WBC heavyweight champion Deontay (42-1-1, 41 KOs) out of the way.

There’s a massive amount of money at stake for Fury because if he wins, he’ll face Anthony Joshua in 2022 in a fight that could make him $100 million.

If Fury beats Wilder, he can move forward and collect that pot of gold. A loss for Fury would destroy that dream, and he could forget about the huge payday.

$14 million worth of tickets had been sold

“They’d sold fourteen million dollars worth of tickets [for the July 24th fight between Fury and Wilder] for the venue, contrary to what some people say,” said Warren.

“That’s the amount that sold. So, it’s rescheduled, and that’s when it’s one.

“Why is Bob Arum going to lie about that? That’s what it sold. Remember, it was going to be the first big event in Vegas, a boxing event.

“So there was big anticipation about it. All the hotels, from what I understand, were taking loads and loads of tickets, buying lots of tickets, booking tickets.

“So who knows? Maybe we’ll be able to get some of the Brits to go now in October, so there will be even more then.

“Bob assured me that they sold fourteen million dollars. I spoke to [Wilder’s co-manager] Shelly Finkel on another matter, and he actually mentioned it because PBC are also the joint promoters in the event. They said themselves the tickets had sold for it,” said Warren.

Matchroom Boxing promoter Eddie Hearn said that only 30% of the tickets for the Fury vs. Wilder III fight had been sold when the contest was postponed. It sounds like Hearn’s course for the information was a little bit off.

“I don’t know too much about that. I’ve seen them, but I don’t know what the background is to that. I haven’t spoken about it, so I can’t give anything,” said Warren in responding to a question about photos of Fury that have surfaced with him out and about.

“The fact of the matter is doctors have tested him [Fury] positive for it [Covid]. So I don’t know what they [the photos of Fury] were. Next time I’ll give you the heads up.

We don’t know when the photo of Fury was actually taken of him standing inside of a casino. It could have been a photo that was taken earlier before he came down with COVID-19. 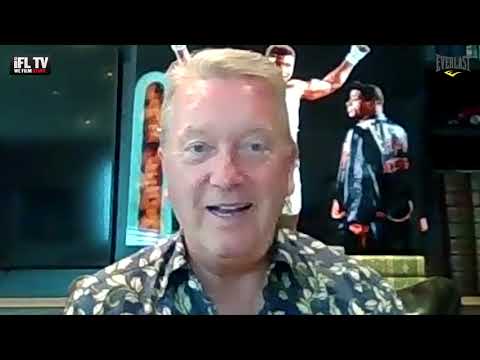