By Jeff Aronow: Chris Colbert (16-0, 6 KOs) says he’s confident that he’ll be fighting Gervonta ‘Tank’ Davis in the future, possibly at 135 in what he believes will be a huge fight. Right now, it’s still too early for the two of them to fight.

Using his superior speed and excellent jab, Colbert controlled the entire fight, frequently landing to the head of the 2012 Olympic silver medalist Nyambayer.

Colbert’s only rough spot during the fight was in the third round when he was stunned from a hard right hand by King Tug.

“Not right now but I think it’ll happen in the future, yes,” said Chris Colbert when asked about a fight against Gervonta Davis.

“It makes sense but it really don’t make sense. Fights are all about making money. Everybody that comes into the game says, ‘I don’t do this for the money. I do this for love.’

“Come on now. If we was fighting for free nobody would do it. I know I won’t. Yeah, maybe at 135, we end up meeting, and I think that would be a hell of a fight, a sold-out event,” said Colbert about a fight between him and Tank Davis.

For Colbert to keep winning long enough for him to meet up with Tank Davis, he’s going to need to work hard on his lack of punching power.

Colbert still doesn’t hit hard enough for him to be competitive against a fighter like Tank. Right now, if they were to fight, Davis would walk through Colbert’s shots and likely stop him within six rounds.

If Colbert doesn’t develop his punching power, he’ll get beaten repeatedly by other fighters at 130.

Colbert wants to be a champion at super featherweight, but it would be a tough ask for him to defeat WBA ‘regular’ 130-lb champ, Roger Gutierrez. For Colbert to beat Gutierrez, he’ll need to work on his defense to avoid getting hit so often.

King Tug was frequently landing when he was letting his hands go. Colbert wasn’t hit a lot more because King Tug was too selective with his shots.

Chris will need to be focused

“I’m going to be honest. I tip my hat off to him, I think he looked tremendous in his last fight. I think at 140, he’ll be an undisputed champion.

“I don’t think nobody will beat him. I think him and Josh Taylor would be a hell of a fight, but I think he’ll knock him [Taylor] out.

“He makes too many mistakes, careless mistakes and his defense is not all that. Me fighting somebody like Tank, I know that I would have to be on my Ps and Qs at all times.

“I know I got that defense to do that in a 12 round fight against him,” said Colbert.

It would be a good idea for the handlers for Colbert to match him selectively for the next three or four years to help him develop. He’s not ready to take on a guy like Tank Davis or any of the champions.

After the fight with King Tug last Saturday night, Colbert mentioned that he’d like to fight Leo Santa Cruz next. That’s not a good idea because Santa Cruz is polished of a fighter for Colbert to beat him. 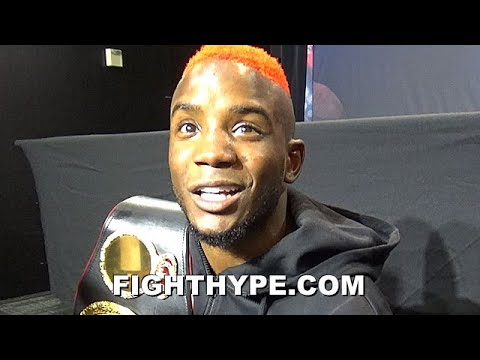 Mauricio Lara vs. Josh Warrington 2 on Sept.4 in Leeds, UK »